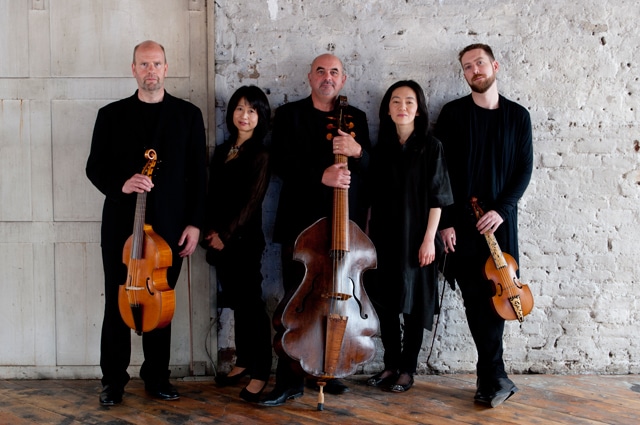 The viol consort Fretwork celebrated its 30th birthday on Friday with an evening of music representing the development of the ensemble’s repertoire across the years. The five current regular members were joined, to celebrate the occasion, by more than a dozen artists who had worked with them over the period – including other viol players, the singers Susan Bickley, Michael Chance and Charles Daniels, as well as lutenist Elizabeth Kenny, cornettist Gawain Glenton and organist Paul Nicholson.

The evening was a pleasing mixture of Renaissance and contemporary music, as Fretwork demonstrated not only their early-music roots, but also the development of their more experimental side. In the former group were a number of classics: William Cornyshe’s Fa la sol (possibly the earliest piece of English consort music), in which the three viols deftly handled the interweaving complex polyphony; the contrasting sedate langour and rhythmic excitement of Dowland’s Sir John Langton’s Pavan and The Earl of Essex’s Galliard; three diverse and equally brilliant examples of Jacobean Fantasias by Jenkins, Lawes and Gibbons. In all of these, the ensemble was effortlessly precise and expressive, delivering the inexorability of the counterpoint and the joy of the rhythmic jumps and snaps through the gentle familiar buzz of the viols. By way of a contrast in timbre, for Palestrina/Rognoni’s Domine quando veneris Fretwork were joined by the Gawain Glenton, whose cornetto trills and riffs soared gloriously above the underlying viol texture.

The more contemporary pieces provided a piquant contrast to the time-honoured early repertoire. In Andrew Joliffe’s Violet, the Colour, the consort was augmented with an organ, a side-drum, and a speaker, in a set of three variations on a series of descending passages. George Benjamin’s Upon Silence for mezzo-soprano and five viols began with a busy restlessness from the viols, underpinning the voice, and went on to employ unusual techniques – pizzicato and rapid tremolo – which eventually coalesced into lingering, held lines, as the melismatic passages from the singer became longer. Duncan Druce’s The Garden of Cyrus was the most engaging of the contemporary pieces – a Fantasia for five viols that began with slow harmonic-rich passages played with the slightest pressure of the bow, and moved, via a more turbulent section, into a coda of homophonic, richly chromatic chords, that felt almost late-Romantic in character.

Just as delightful was an arrangement, for viol quartet, of Wolf’s Auf ein altes Bild (appropriately, a song about a Renaissance painting) from his Mörike Lieder, sung with touching stillness by Susan Bickley. The countertenor Michael Chance also joined the ensemble for performances of Purcell’s Music for a while and Morley’s O Grief e’en on the bud. The former was given a satisfactory performance, although Chance was a little husky, with some of the top notes taking a while to sound; for the latter song, however, Chance had really warmed up, and it was given an exquisitely restrained and nuanced rendering. Charles Daniels also gave a competent performance of Tromboncino’s Sí è debile il filio; Daniels is a consummate professional, and never disappoints an audience, but it did rather feel as though he had agreed to it at the last minute.

The final piece, Gibbons’ The Cries of London, alas, fell short of Fretwork’s usual standard. Although the viols performed perfectly, the singers were clearly under-rehearsed, and it was unfortunate to see several pairs of fearful eyes buried so deep in copies. It is supposed to be a rumbustious piece, but co-ordinated boisterousness needs careful practice, and this hadn’t been given it.