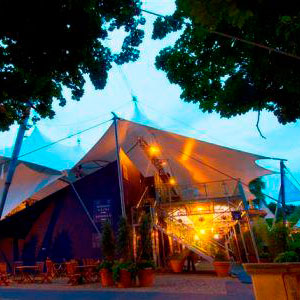 One of the intriguing aspects of attending this double bill of one act operas was trying to ascertain when Mascagni’s Zanetto (1896) had actually last been performed in Britain. One person thought there had been a student performance in the 1960s but wasn’t sure; another believed there had been a professional production in Manchester in 1913 but didn’t want to be quoted. All I know is that a subsequent internet search did not leave me any the wiser on this point.

Whether Opera Holland Park’s own claim that Zanetto has not been performed in Britain for over a hundred years is strictly true or not, it is certainly a rarity on our shores, even though in Italy it is sometimes paired with Gianni Schicchi. The even greater mystery to anyone who has now seen it is why on earth it should ever have become so obscure in Britain in the first place.

Zanetto tells of the attractive Silvia who is admired by everyone, and yet cannot find it in her heart to love any man she has met. When, however, the young Zanetto appears, pride forces Silvia to suppress her feelings for him and confront her ageing body when she learns that he sees her as an elder sister. Zanetto tells her that he is looking for Silvia whom he has heard is beautiful above all others, and so the fact that he does not recognise her as such bruises her heart and causes her to send him away.

It is possible to pick holes in the performances of Janice Watson (Sylvia) and Patricia Orr (Zanetto), but in the face of a score that is pure Mascagni, any faults count for very little. Sumptuous, fluid string and wind passages give way to more pointed rhythms, while exquisite harp lines contrast with an ‘Overture’ that consists of a cappella offstage choral chanting. Watson’s voice may feel excessively harsh in the upper register, and her gestures may verge on the melodramatic, but in the context of such an overtly emotional piece, her assertive sound and passionate stance overpower all else. Indeed, her middle register seems to occupy a different vocal mode altogether, which might feel awkward were it not that it actually adds another facet to the experience.

In contrast, Patricia Orr as Zanetto has a cleaner, more direct sound, which can feel underpowered in the lower register but succeeds in moving us virtually every time that she sings. The result is a highly stirring meditation on the themes of love and mortality, where for an all too brief fifty minutes we are whisked away to a world of heightened emotions, and left wondering why Zanetto should ever have been off the British menu for quite so long.

If strictly speaking there are things wrong with this Zanetto and yet they hardly matter, the opposite is true of the better known Gianni Schicchi, in which there is little obvious to fault and yet which does not quite hit the mark. While Zanetto uses a set of half plastered walls, embellished with riches and Art Nouveau pictures, Gianni Schicchi employs the same basic set but strips it totally bare.

The strength of this production of the third of Puccini’s Il trittico operas is to combine highly spirited performances with some interesting insights. Never before has it been made quite so clear that ‘Oh mio babbino caro’ is really nothing to do with devotion and everything to do with emotional blackmail. This is mainly down to Anna Patalong’s excellent performance as Lauretta, but also because Schicchi, with his grimaced face, is placed centre stage throughout the aria.

Alan Opie’s stubbled Schicchi is vocally smooth, but rough and roguish in persona, while as Rinuccio, Jung Soon Yun’s tenor is vibrant and lively, and maintains a good balance between lightness and power. Other notable performances come from William Robert Allenby’s Simone and Carole Wilson’s Zita, while the sheer extent to which Buoso Donati’s body is lifted, carried and dropped at intervals contributes to a bold dynamic.

The question, therefore, remains why the overall performance comes across as good rather than brilliant. It may be because the memory of Richard Jones’ slicker and actually more understated production at the Royal Opera House is too recent, or that Martin Lloyd-Evans’ production can feel as if it is trying too hard, or that, with the exception of several principals, the overall musical standard is fine rather than exceptional. All the same, this double bill comes highly recommended, if only because it would be a crime to have to wait another hundred years to experience the wonderful Zanetto.