A concert performance that enabled us to hear a well known musical in an entirely new way. 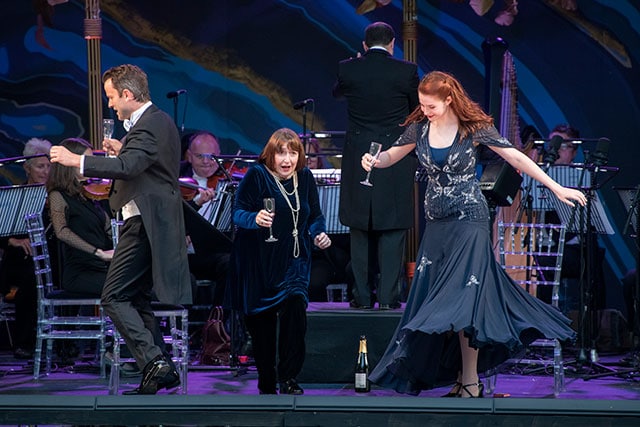 Over the past few years West Green House Opera’s season has included concerts featuring the Simon Bates Big Band and Harry the Piano, with 2017 focusing on George Gershwin and 2018 Cole Porter and Noel Coward. In 2019 the spirit of providing an evening that focused more on popular culture was retained, but this time by presenting an entire musical. On that occasion we were treated to a hugely enjoyable Guys and Dolls in concert, and this year the magic has been repeated with what is widely considered to be MGM’s last great musical.

When the idea for presenting Gigi was first conceived, as far as anyone knew it would be performed in the venue’s Green Theatre. This is because it was first planned for the ultimately abandoned 2020 season, and even when it was rescheduled it was not clear from the outset that the entire 2021 season would be performed outside on a stage occupying the island that lies in the middle of the lake. The question was could a performance with no staging or chorus project itself over such a large area when it would have originally been intended for a far more intimate space? The answer is by and large “yes” thanks to director Christopher Luscombe devising ingenious ways to make the evening engaging by interweaving a performance of the musical with a history of the piece.

No longer is Honoré Lachaille the sole narrator of the action, but rather all six principals at times describe the situation before launching into the next song. It is the equivalent to presentations of operas where dialogue is replaced with narration, and though cutting lengthy exchanges here might have risked making the show extremely short, other elements were introduced to make the evening feel both substantial and worthwhile. So, for example, we learnt that Lerner and Loewe were so determined for Maurice Chevalier to be in the 1958 film, in spite of there being no role for him based on Colette’s 1944 novella, that they added the character of Honoré especially.

“…could a performance with no staging or chorus project itself over such a large area?”

We heard, from an excellent Rebecca Jardine, Gigi’s song ‘The Parisians’, which was sung by Betty Wand (dubbing for Leslie Caron) in the film, but also the rather different song that Lerner and Loewe replaced it with when they adapted their film for the stage in 1973. As was explained, this second song was written because the person set to play Gigi (though in the end she never made it to the Broadway run) made the character feel rather more brash, so they attempted to counter this by giving her more tender songs. It would be impossible to present both in a production of the musical, and so this format allowed us to experience things we could never normally have done. The score for another song from the film has been lost because, as John Wilson knows all too well, MGM always destroyed them after production. However, a piano score does survive so the song was performed with this, which again could not have been done on any occasion where it would have been inappropriate to switch musical forces midway through the performance.

The opportunities to build up character and hence draw us into the scenario may have been marred a little by the lack of staging and the truncation of dialogue. Similarly, though the positives outweighed the negatives, the magic could be broken by repeatedly taking us into and out of the world of the musical through the introduction of commentary. However, so strong were the performances that these problems were only ever minor and hardly existed at all after the interval. It was immensely enjoyable to hear such songs as ‘I’m Glad I’m Not Young Anymore’, which Simon Green as Honoré presented particularly well, and ‘Gigi’, where Timothy Dickinson as Gaston gave a particularly heartfelt performance, but the evening really came into its own during the duets and trios. Green and Dickinson were on top form in ‘It’s a Bore’, ‘The Night They Invented Champagne’ with Jardine, Green and Beverley Klein as Mamita, positively sparkled, while Green and Klein’s ‘I Remember It Well’ felt like pure poetry in motion. The British Philharmonic Concert Orchestra, conducted by Anthony Kraus, was also on splendid form.

Details of West Green House Opera’s 2022 season will appear on its website in due course. The gardens at West Green House remain open for the majority of the year, and details of opening times and events taking place in them can be found on the designated website.