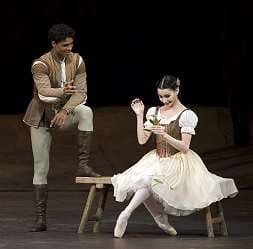 I must admit to being a little sceptical about the prospect of yet another revival of Giselle. It’s not long since they last performed it, I thought. The production is getting long in the tooth, I thought. It’s not the most compelling of works, I thought. Well, I was wrong. This was a most appealing and largely engaging performance of perhaps the most celebrated ballet of the Romantic era.

The story of the Wilis derives from the German poet Heinrich Heine, and was also the basis for one of Puccini’s early operas, Le Villi. The tale was expanded for the ballet into two acts by the French poet Théophile Gautier. The original choreography was by Jean Coralli and Jules Perrot, later revised by the great Marius Petipa; this is the version used by Peter Wright for the Royal Ballet’s production.

Act I describes how the peasant girl Giselle is in love with the villager Loys, who is in fact Count Albrecht in disguise. Giselle’s mother, Berthe, wants her to marry the forester Hilarion, but Berthe’s efforts are to no avail. The villagers celebrate the harvest. A hunting party arrives, led by Bathilde and her father, the Duke of Courland; Bathilde turns out to be affianced to Albrecht. This turns Giselle mad with grief, and she kills herself.

In Act II, the Wilis emerge. They are the ghosts of young girls who have been jilted and died before their wedding day; they dance to death any men they happen upon during the night-time. Myrtha, Queen of the Wilis, initiates Giselle into their rites, and their first victim is Hilarion, come to grieve at Giselle’s grave. When Albrecht arrives, they set upon him too, but the dawn breaks and the Wilis’ spell is lost. So too is Giselle, who has to leave the mourning Albrecht behind.

It’s not the happiest of tales. And for my taste the opening scene of Act II, when the Wilis have an elaborate dance as a showcase for the corps, goes on too long without character development or real action though it was superbly performed on this occasion. Nevertheless, there are many wonderful scenes for the two lovers, and this is where the evening really sparkled.

Miyako Yoshida much be the most underrated ballerina in the company. She retains her creamy, spotless technique after many years as a principal, and is always stunning to watch. Even more than this, though, her acting has sharpened, and she showed a well-rounded progression from cheeky peasant girl to anguished spectre. I thought her rendition of the mad scene at the climax of Act I particularly moving, adding a touch of real danger when she spun threateningly around the villagers with the sword with which she kills herself.

Yoshida’s partner was Federico Bonelli, who has sometimes been wooden and unemotional in the past. He inhabited the role far more convincingly this time round however, and the jets in Act II showed a more confident technical side to his dancing.

Gary Avis was a robust Hilarion, and Gillian Revie made an unusually strong impact in the small role of Berthe. One felt her influence over her daughter more acutely than is often the case. On the downside, there were several slips from some of the soloists, and even Lauren Cuthbertson wasn’t as impressive as she normally is.

John Macfarlane‘s designs remain an opulent feast for the eyes whilst never getting in the way of the action. And Boris Gruzin threw plenty of energy into Adolphe Adam’s sometimes dreary score, with the brass instruments in notably good form despite one fluffed note.

In all, an extremely agreeable evening, and well worth catching when it comes to BBC television in the near future.