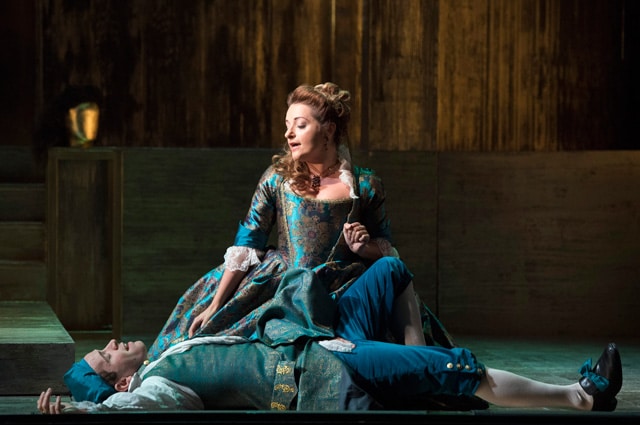 English Touring Opera’s decision to perform Handel’s Giulio Cesare in two parts, subtitled The Death of Pompey and Cleopatra’s Needle respectively, derived from two factors. The first was the fact that with music as wonderful as this it seemed a shame to cut a single note. The second, which followed on from this, was that it might be difficult to draw an audience by publicising a four-hour epic. Director James Conway is adamant that he is not suggesting his way of presenting the work should necessarily be followed by others, and at the end of the present tour he plans to produce a single more abbreviated version for subsequent ones. In the meantime, however, experiencing the work in this full-blown and highly innovative form proves to be extremely worthwhile.

The action is set not in ancient times but Handel’s own day, with everyone in eighteenth century costume. The first part begins with Curio on the stage inviting two groups of eight people sitting on each side of the dress circle to stand. They are dressed in modern clothes and it soon transpires that they constitute the chorus (provided for the London performances by the Imperial War Museum Singers) for the evening.

If initially it seems that such choices simply add colour and theatricality for the sake of it, it soon becomes clear that they serve a deeper purpose. Although Giulio Cesare is nominally set in Ancient Egypt, in so many ways it reflects eighteenth century values as it endeavours to engage with its own audience from that period. For example, Cornelia wishes that God will assist her righteous vengeance against Tolemeo, rather than the gods (either Roman or Egyptian). This use of the singular seems deliberate on the part of the librettist Nicola Francesco Haym as a way of using terminology that meant something to his audience. In the same way, by having the chorus later cry for the death of Cesare from the dress circle it almost feels like a boisterous eighteenth century audience heckling the performers.

The staging is simple but effective. Cordelia Chisholm’s set consists of a box-like area of gilded wood, which under Mark Howland’s excellent lighting often possesses a mysterious glow. It stands on two levels with three doors lining each side of the lower tier and a larger one at the back allowing for grander entrances. The set can feel very enclosed or, by removing certain panels, quite open and stark. The level of detail in the design is also notable as upright frames that act as tables to support candles are then overturned to create seats. Colour is also exploited so that turquoise is to be found in the carpet that lines the stairs that join the two levels, the cloth in which Pompey’s head is wrapped, and the cape that Cleopatra wears when she first meets Cesare as Lydia. 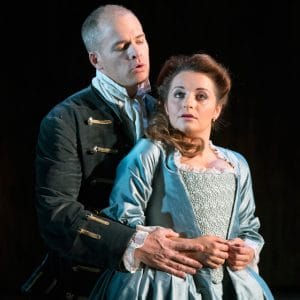 The amount of direction applied to the arias is also appropriate so that they feel dynamic, and yet are not overburdened with superfluous and distracting actions. A hook is introduced for some of them so that when Cesare sings ‘Va tacito e nascosto’ Tolomeo attempts to mirror all of his gestures, thus employing a technique included in modem day management training to try to stand tall against his rival. Props are similarly effective so that while the cloth that encases it is blood soaked, Pompey’s head becomes a clear glass bust with a red spiral pattern on it. This is later transformed into the urn that contains his ashes. This allows those who seek revenge for his death to smear their foreheads with the grey substance, and Tolomeo to empty it in front of Cornelia as if to show just how futile her resistance to him is.

Part II repeats six of Act II’s scenes that were seen in Part I. Conway argues that this enables them to be explored ‘from subtly different perspectives’, but the differences do not feel substantial enough to justify the repetition. Nevertheless, no-one will complain at the opportunity to hear Soraya Mafi’s Cleopatra sing ‘Se pietà di me non senti’ again after it ends Part I in such sublime fashion. It also says something about the production’s underlying strengths that even this weaker aspect is soon forgotten as Part II then proceeds in stylish fashion with many subtexts being highlighted in the ending.

In the original Cornelia draws a dagger on Tolomeo before Sesto rushes in to demand the honour of killing him. Here, however, the mother actually carries out the first strike, thus calling into question how heroic the son is really being in finishing off an already wounded man. Sesto then looks far from triumphant, highlighting just how futile revenge can feel. It will not bring his father back, and he is left having to watch the man who defeated him standing triumphant in celebration. At the same time, however, the way in which the ending sees the other characters move around Cesare suggests that Cleopatra is the real victor who will run rings around him.

Jonathan Peter Kenny’s conducting is nicely paced, and the orchestral playing from the Old Street Band finely balanced. The cast, which includes Catherine Carby as Cornelia, Frederick Long as Curio and Thomas Scott-Cowell as Nireno, is also good across the board, but the standout performance comes from Soraya Mafi as Cleopatra. Displaying a sweet and strong soprano, she effortlessly meets of all the part’s considerable vocal demands, and radiates real presence and allure. The timbres of the countertenors of Christopher Ainslie (Cesare) and Benjamin Williamson (Tolomeo) feel quite different, and yet both sounds are characterised by precision, and combine clarity with a high level of nuance. Kitty Whately sings her heart out as Sesto while, as Achilla, Benjamin Bevan reveals a very strong and secure baritone.

In spite of the repetition of several scenes in Act II not quite working, a trip to see both parts of this Giulio Cesare is still to be recommended as the ideal. If, however, when English Touring Opera comes to your vicinity you are not free for the performances of both it is still worth trying one, whether that happens to be Part I or II.