by Sam Smith
published: 12 May 2020 in Opera and Classical Reviews
Tweet 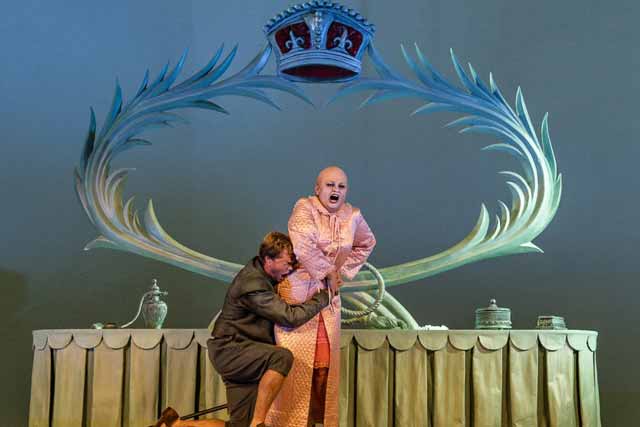 Britten’s Gloriana was written to mark Queen Elizabeth II’s Coronation in 1953, and has not enjoyed many outings since. In fact, when it was staged at the Royal Opera House in 2013 to mark her Diamond Jubilee, it was the first time it had appeared at Covent Garden since its premiere there sixty years earlier. Seven years later it is being offered online until 24 May, and is worth watching because opportunities to experience the work are few and far between, and this broadcast really shows Richard Jones’ production at its best.

With a libretto by William Plomer, and based on Lytton Strachey’s 1928 book Elizabeth and Essex: A Tragic History, the opera explores the trials and tribulations of Elizabeth I. As it considers how she must balance her own feelings with her responsibilities towards national security, it very much celebrates the crowning of Elizabeth II without coming across as an overt piece of propaganda. In some ways it empathises with the new Queen by suggesting that she too will face difficult times and choices, but by exploring the final years of the ageing monarch it creates enough distance to ensure that the more distasteful aspects to the older character are not impressed upon the twenty-seven year old.

Elizabeth I is in many ways the type of ‘outsider’ figure that Britten loved to explore. Her immense, though far from absolute, power, however, still makes her different from a Peter Grimes or Owen Wingrave, and the music consequently lacks some of the emotional starkness to be found in his other works. In Act III, however, it is no less psychologically intense, while at the various masques and balls it is interesting to experience Britten’s own spin on Tudor music. There are also some excellent musical contrasts such as when a jovial dance leads everyone off the stage to give way to more menacing strains as the Earl of Essex plants himself on the throne.

In 2013 Jones presented the drama as a ‘play within a play’ with Elizabeth II attending a performance of the work staged in 1953 in a large yet lowly municipal hall. Ultz’s set saw the venue include such familiar features as painted brickwork, large radiators and a roof with steel trusses, while the wings of the hall’s stage were visible so that we saw the director and stage hands (all performers) going about their business.

However, expecting the singers to show that they were putting on a performance clouded the emotions being portrayed and prevented the audience from really believing in the scenario. When, for example, Essex was wounded at the beginning, Toby Spence’s reactions were those of an actor playing the part of being injured, which prevented us from connecting with the noble’s feelings of outrage and mortification. Similarly, seeing Susan Bullock sip water in between scenes as a performer destroyed the magic she had conjured up to convince us she really was the Virgin Queen.

This problem is far less acute in the filmed version because close-up shots effectively compartmentalise the action so we are not always seeing simultaneously what is happening centre-stage and in the wings. In this way, when we see Elizabeth and Essex interacting we believe in what we see because there is nothing to detract from the moment. When the camera does alternatively show the director gazing on attentively, it actually adds to the atmosphere as it carries the same power as if it had shown a real audience member being totally entranced by what they saw.

In fact, the level of detail that comes to light with such close-up shots introduces an extra layer of delight. It was always possible to see the director standing in the wings on one side, and the stage manager on the other along with the requisite member of the St John Ambulance. However, with regular close-ups on the director, played by Andrew Tortise, we can see how much he is taking a pride in his creation. He walks a boy through his actions before he goes on, hovers over a stage hand as if to urge him to pull on a rope more quietly, and gazes tearfully on a moving moment between Elizabeth and Essex, having nurtured the performers to create it. Tortise would not have known when the camera was going to cut to him, so the fact he is completely in character every time reveals how well he sustains the part of predominantly gazing silently on from the wings all evening. He does, however, get his moment centre-stage as this director also dons a costume to deliver an excellent ‘cameo’ as Act I’s Spirit of the Masque.

Susan Bullock makes us see Elizabeth as a flesh and blood human being who can make serious State decisions one minute and demonstrate childish cruelty (she mocks Lady Essex by stealing and donning her dress) the next. Bullock’s rich, rounded and sumptuous voice is ideally suited to asserting presence, authority and character, and the scene in which she appears bald, her body stripped of its finery and her emotions laid bare, is particularly moving.

Bullock is surrounded by a strong cast that includes Toby Spence as the Earl of Essex and Mark Stone as Lord Mountjoy, as well as Clive Bayley, Jeremy Carpenter, Kate Royal and Patricia Bardon. Gloriana is an opera, however, where not only those with the most stage time have the opportunity to stand out. Brindley Sherratt has just one scene as the Blind Ballad-Singer, but his deep bass voice, with its exquisite mastery of dynamic variation, leaves an impression that far exceeds the size of his role. In the pit Paul Daniel conducts with a pleasing combination of relish and sensitivity that, it would seem, derives from an excellent understanding of Britten’s intentions.

For us today, the 1950s may feel as nostalgic as Tudor England did in 1953. For this reason, the production takes on a heart-warming quality that is enhanced further by the attention to detail. When we see one of the production team urging the children playing soldiers on by carrying out their action with them from the wings, we all know a primary school teacher who has done exactly the same in a nativity play. ‘Delightful’ is not an adjective one might normally apply to Britten’s music, but it is certainly the perfect one to describe this production.