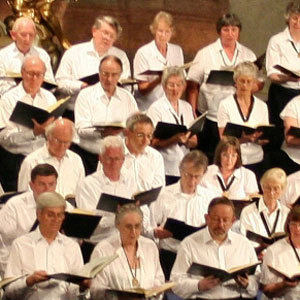 Some of the most satisfying collaborations between amateur and professional performers occur when the amateurs contribute equal levels of commitment, enthusiasm and musicianship to the joint performance — and Goldsmiths Choral Union managed to achieve this in their latest programme of Mozart’s choral works, performed with a stellar cast of soloists and the Hertfordshire Classical Orchestra.

The orchestra opened the programme with Mozart’s delightful Adagio & Fugue in C Minor, originally composed for two pianos and later rescored by the composer both for string quartet and string orchestra. The Hertfordshire Classical Orchestra performs on period instruments, producing a sweet, mellow and warm collective sound which thickened out Mozart’s economical textures, despite the occasional loss of blend at the end of the long held notes. A vibrato-less performance coupled with flawless ensemble allowed the delicate intricacies of this work to come through.

This work was followed by a performance of Mozart’s Vespers, which featured a bright and energetic opening from the choir, who displayed engaged and enthusiastic but not over-zealous singing throughout ‘Dixit Dominus’ and the ‘Confitebor’, which concluded triumphantly. A robust but not overpowering tenor section, coupled with warm altos and well-grounded basses supported the soaring and occasionally sparkling soprano section, and the whole choir engaged with the audience and their conductor as if they knew the work by heart.

The third movement, ‘Beatus Vir’ might have been better done with a semi-chorus — the Goldsmiths Choral Union features some 120 singers, and staccato scales and double-dotted figures (both of which feature heavily in this movement) can tend to get lost, despite the energy and control of the singers involved. A commanding ‘Laudate Pueri’ raised the bar again, with an excellent blend and commanding presence from the choir, although showing the need for a slightly larger bass section in what is a rather top-heavy choir. Despite occasional breath control issues at the beginning of the beautiful ‘Laudate Dominum’, Gillian Ramm displayed a warm and powerful middle and lower range and easy soaring top notes.The second half of the programme comprised Mozart’s C Minor Mass. The choir and orchestra supplied the appropriate gravitas and Ramm’s soaring interjections acted as a beacon of hope amongst the desperate choral imploring of the ‘Kyrie.’The exuberant ‘Gloria,’ performed with terrific energy, paved the way for the Laudamus Te, taken by the second soprano soloist, Martene Grimson. Grimson is an attractive and confident performer with a voice rather on the dark and rich side for a Mozartian soprano, and she displayed immaculate coloratura and some surprising power on the low notes. . Ramm sparkled again in her sensitive, florid interpretation of the ‘Et incarnatus’. Between these movements the choir continued to make intelligent contributions, with a particularly beautiful ‘Qui Tollis’ and ‘Sanctus’, featuring a lovely balance from the double chorus (which made for a beautiful sound and much better contrast in dynamics too) and superb energy and conviction from the orchestra.

There wasn’t a weak link within the team in this performance, and each unit brought its own charm and confidence to the stage.