by Sara Miller
published: 28 May 2006 in Opera and Classical Reviews
Tweet 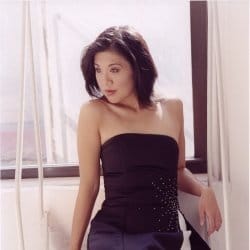 ‘She’s exquisite!’ whispered my companion to me, as I sat there in awe, only able to nod mutely.

We were talking about Grace Nikae, who kept her whole audience entranced during this concert at the Wigmore Hall.

The performance was part of the Wigmore Hall’s Sunday afternoon initiative. Concerts begin at 4pm and are at the perfect time to allow patrons to be home in time for an early night before the week’s work begins.

The first piece that we were treated to was Scriabin’s Sonata No. 2 in G Sharp Minor, Op. 19, or the Sonata-Fantasy (1892-97). Nikae made this fiendishly difficult Chopinesque piece sound effortless. The mellifluous tone was created through the warm, chocolaty bass, combined with the way that Nikae’s fingers delicately fluttered over the top range of the piece. She made the heavily romantic nature of Scriabin’s Sonata genuine, without unduly emphasising rich harmonies, which came out naturally and honestly.

After the breathless ‘night on the seashore’ of the opening Andante, the Presto which followed showed Nikae’s versatility. The movement required a portrayal of ‘the vast expanse of the ocean in stormy agitation’, according to the programme, and Nikae certainly delivered. We heard in her playing the power of the water and were swept along in the current of her attack, through a vivid aquatic turbulence and seamless dynamic changes.

Nikae’s next offering was Granados’ Quejas O La Maja Y El Ruiseor from Goyescas, or Lament, or the Maiden and the Nightingale (1911). After the Scriabin, the hall was filled with electric anticipation for what was to come. We weren’t disappointed as Granados’ heart-aching chromaticism ascended from the piano, all chords perfectly together and the trills magically radiant.

Again, the highly romantic music was played with mature reserve. Nikae succeeded in revealing the deeply intimate subject matter of the musical material whilst maintaining a sense of privacy. The exotic Spanish folk music ebbed out in its cleverly arranged form, bringing to mind the red-orange of the Mediterranean sun and the stillness of the painful lament in the second half. Most notable were the trills at the end of the piece. It was as though the Nightingale had come to life and Nikae was watching it fly away as she played.

The next piece was Four Apparitions by Lowell Lieberman (1985). It was based on ‘the relationship between form, matter and idea’. This performance was a refreshing break from the romanticism of the first two. It displayed Nikae as an educator. She regularly gives masterclasses and seminars, and has made it a high priority in her career to make music in all its forms accessible to as many people as possible. This performance was no exception. The four movements, which could have easily alienated the audience, were played with great musical expressiveness so that each conveyed its specific motivic focus.

The way that Lieberman experimented with the piano’s technical possibilities to create atmosphere was very effective. The movements included delightful ‘spiced up’ nursery rhyme-like themes, sinister bass rumblings, fantasy, anticipation and danger. It was a treasure trove of experiences in one place; and it ended on a depressive chromatic melody that was constantly being pulled down by its droning repeated pedal notes and evocative harmonies.

The other modern work in the programme was Arronte’s world premiere. These Unfinished Pieces were unfinished in the sense that they were whittled down to their most basic components. It was an exercise to explore what was being suggested, and in this sense it was an interesting work. However, the basic idea is not original. It had the potential to be presented in a new way, if only the composer had made more use of the nationalistic influences already hinted at.

With the hard work over (on our part at least), it was back to water, romance and spice, as the tinkling pentatonic harmonies of Ravel’s Jeux d’Eau (1901) descended on us. Its trickling crystalline forms were evocative of natural springs, fountains and innocent beauty. Nikae summoned up the glacial brilliance of the music’s white light as the notes seemed to reflect off the innumerable surfaces of the water. She was so immersed in everything she played that her through her finishing pose, with her arms spread after having being launched off the most extreme ends of the piano, she painted the picture of a fish diving out of the water.

We were in for yet another treat in the form of Ginastera’s Danzas Argentinas, Op. 2 (1937). They were also suitably vivacious and packed a rhythmic punch, ending on a depiction of an aggressive Argentinean dance, with all-inclusive yelps and screams as frustration was released and energy stamped its way through the hall.

Nikae also played Liszt’s Sonetto 104 del Petrarca, (1838-1849) and Bartk’s Dance Suite, Sz. 77 (1923). The Liszt and the Bartk were performed with the flawless technique that we had come to expect of Nikae. Both performances captured the styles perfectly.

The second half was as immaculate as the first – though perhaps the intensity of the concert was a little too much for the rest of us mere mortals to cope with, and we were left somewhat saturated and overindulged. However, it was an afternoon of piano playing of the highest standard.