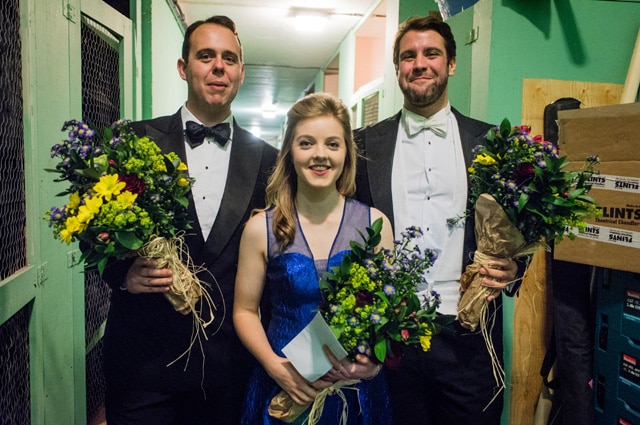 Compulsory Handel aria in every selection? Now that’s my kind of singing competition. One suspects the guiding hand of the Grange Festival’s Artistic Director, Michael Chance, and how very wise it was, since if any composer can distinguish the should-not-touch-it-with-a-ten-foot-pole from the made-it-sound-easy, it is Handel. Six singers with already impressive CVs had been chosen from an initial 80 to perform their Handel and other composers, and it is safe to say that we will be hearing much more from all of them in the future.

Appropriately, the singing began with the bass-baritone Božidar Smiljanić giving a splendidly rousing performance of ‘Revenge, Timotheus cries’ from Alexander’s Feast – there was plenty of bite in the phrasing and drama in the characterization here. Two less distinctive performances of Mozart arias followed, and his programme closed with an ambitious choice, ‘Let things be like they always was’ from Weill’s Street Scene.

The mezzo soprano Katie Coventry also chose to begin with Handel, in another daring choice in the shape of ‘Stà nell’Ircana’ from Alcina – although her voice is on the light side for Ruggiero, she gave it the required sense of determination and recovered well from a parting of the ways with the orchestra. She was heard at her best in Annio’s aria ‘Tu fosti tradito’ from La Clemenza di Tito.

Closing the competition’s first part was the baritone Dominic Sedgwick, with another quite daring selection which included an impassioned ‘Mein sehnen, mein wähnen’ from Korngold’s Die Tote Stadt. His Handel choice, from Giulio Cesare was perhaps his least impressive, but Owen’s ‘Peace’ aria from Britten’s ‘Owen Wingrave’ was superbly done, with a maturity of style and sensitivity well beyond the singer’s 27 years. It was no surprise at all that he was the choice for the Audience Prize, and by a considerable majority.

Sam Furness began the second part with one of Handel’s most taxing and most beautiful arias, ‘Waft her, angels, through the skies’ which revealed a soft-grained tenor as yet not quite able to fill out the longest phrases. His very varied programme included a sweetly sung ‘Kein andres’ from Capriccio and a sincere performance of Lensky’s aria from Eugene Onegin – this is a lovely voice and a distinctive stage presence but this afternoon did not always reveal these at their best.

Rowan Pierce had already carried off the Song Prize so her confidence must have received a boost, and what a confident showing this was. She sang ‘No, no, I’ll take no less’ from Semele with clear articulation, well judged phrasing and just the right touch of arrogance to suggest the character’s intentions, and although her ‘Vado, ma dove?’ (Mozart) was not so distinctive, her reading of the ‘Rhapsody’ from Finzi’s Dies Natalis’ captured the fervour of Traherne’s poetry and Finzi’s ecstatic music. As with Dominic’s Audience Prize, there was no doubt that she would take the top place.

Samuel Sakker is quite a presence, and he lived up to it by making his Handel choice ‘Total Eclipse’ from Samson, a very demanding one which he sang with real gravitas and elegant phrasing. In complete contrast, ‘Der Trunkene im Frühling’ from Das Lied von der Erde was full of exuberance, and the same feeling characterized ‘Dein ist mein ganzes Herz.’ It was not surprising that he was given the second prize, with the bass-baritone in third place. Samuel also took the Bournemouth Symphony Orchestra Prize, which involves an engagement with the orchestra who had provided superb support for all the singers.

The Waynflete Singers Prize was awarded to Katie Coventry, Sam Furness and Boždar Smiljanić, giving them parts in a performance of Mozart’s C minor Mass at Winchester Cathedral. In announcing the winners, Dame Felicity Palmer gave a fine speech in which she reminded us of both the challenges and joys of the life of a singer – both of which will surely be experienced to the full by these young artists.