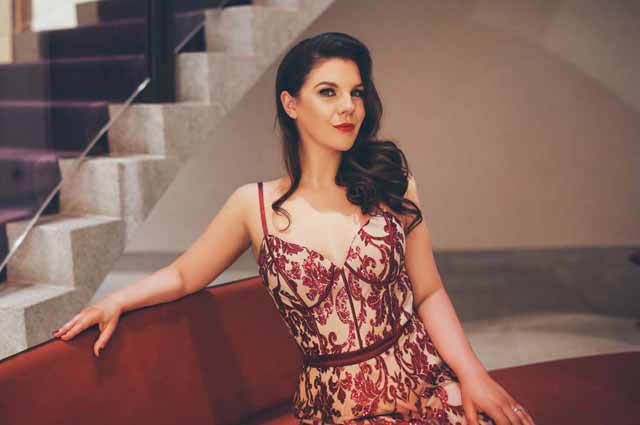 The past few seasons have seen West Green House Opera complement its main productions in the Green Theatre with an evening featuring the Simon Bates Big Band and Harry the Piano. 2017 focused on the music of George Gershwin and 2018 on Cole Porter and Noel Coward, but this year the spirit of providing an event devoted to popular culture was observed in a different way by presenting a full musical.

Linnhe Robertson’s concert staging of Frank Loesser and Abe Burrows’ Guys and Dolls saw the West Green House Orchestra occupy the stage, with the Art Deco backdrop that is used for all of this year’s main productions feeling particularly appropriate, since it could support any Busby Berkeley style number that Miss Adelaide sang at the Hot Box.

The seventeen strong cast sat in front of the orchestra, with the seven women on one side of conductor Jae Alexander and the ten men on the other. ‘Runyonland’ (the Overture) did not feature any activity to depict the hustle and bustle of New York City that a full production would have included, but during it Nicely-Nicely Johnson, Benny Southstreet (Matthew Healy) and Rusty Charlie (Joe Partridge) could be spotted consulting their form guides to set the scene for their ‘Fugue for Tinhorns’ (‘I got the horse right here’) which immediately follows.

Throughout, in fact, a wealth of tiny details were introduced so that during ‘Sit Down You’re Rockin’ the Boat’, brilliantly sung by Dominick Felix as Nicely-Nicely Johnson, lines were closely observed. When he sang ‘found a bottle in my fist’ one was suddenly in his hand (thrust into it by Benny Southstreet sitting next to him) and he proceeded to hand it around the men with some looking tempted, but all ultimately passing it on, because ‘the passengers were bound to resist’. Such invention lay at the heart of the evening and one could not help feeling that ‘Take Back Your Mink’, which Adelaide and the women danced a full routine to, was stronger for the removal of garments only being mimed so that it was purely suggestion that carried the number.

The orchestra played very well, and if at times its output felt just a little overwhelming and unrelenting in this small venue, so good was its sound that no-one would have seriously been wanting anything to be turned down. The singers were amplified, and occasionally this did threaten to unbalance things as during ‘A Bushel and a Peck’ the five members of the women’s chorus risked being five times louder than lead singer Adelaide. The sounds that the soloists produced, however, were very good, with all of them delivering at least some of their parts from memory.

The evening also revealed how different acting styles can work for concert performances as the hyperbolic whining accent of Rosie Morgan’s Adelaide would have been too much for a fully staged production, but was perfect here for marking out her character in the absence of a wider infrastructure. A similar point could be made with regards to Jack Holton, whose emphasis on making Sky Masterson the strong, silent type worked well, where in a full production he may have needed to convey his smooth talking charm just a little more. Holton revealed an excellent baritone, and may actually have been hindered by having to sing into a microphone as it meant he could not always project his sound as much as he might otherwise have done, but overall the strength and quality of his voice did come across.

There was excellent support from Ella De Jongh as General Cartwright and Will Sharma as Nathan Detroit, but the highest accolades of all go to Alison Langer as Sarah Brown. She proved her abilities as a singer, actor and dancer when playing Oscar in Un ballo in maschera at Opera Holland Park earlier this summer, and here she ensured that Sarah’s ‘pious’ qualities made her feel endearing and engaging rather than self-righteous. Her duet ‘Marry the Man Today’ with Morgan was one of the highlights of the evening, and she ensured that the Havana nightclub scene worked a treat, even in the absence of all of the dancing that would normally accompany it. It still included some singing from other characters, but essentially her own jiving and swaying to the music, in a portrayal of drunkenness that never felt overdone, was entirely responsible for conveying all of the necessary atmosphere in this most heady of settings.

Full details of West Green House Opera’s 2020 season, which includes productions of La rondine and Eugene Onegin, will appear on its website in due course.