by Dominic McHugh
published: 13 May 2006 in Opera and Classical Reviews
Tweet 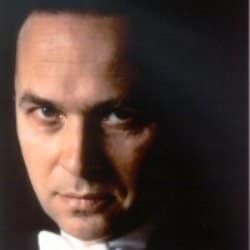 This concert with the Hall Orchestra under their Music Director, Mark Elder, was quite simply the most technically consistent and enthusiastically played programme I have heard so far this year.

At their home in Manchester’s Bridgewater Hall (which puts many a London venue to shame), the country’s oldest orchestra offered a programme of Mozart, Johann Strauss and Richard Strauss that connected Viennese music from several eras.

You don’t find music making of this quality around every corner, and once again the Hall affirmed their position as one of the country’s two or three greatest orchestras.

The concert was given in honour of the 80th birthday of the music critic and scholar Michael Kennedy. Mr Kennedy’s illuminating column in the Sunday Telegraph is never cynical and always lucid rare qualities in journalism, these days while his books on Elgar and particularly Richard Strauss are intellectually rigorous and meticulously researched.

As a surprise birthday present, the orchestra offered an extra item, Elgar’s poignant Sospiri. It was played with tear-jerking intensity, the harp introduction preparing a yearning violin theme. Later this was taken by the cellos, plunging into the depths of emotion. It was a fitting tribute to the man whose Portrait of Elgar is still one of the standard textbooks on the subject.

On paper, programming Mozart and Johann Strauss could have seemed like pipe-opening repertoire. But in Mark Elder’s hands, a different soundworld was created for each of the concert’s four composers, thanks to the dedicated response of the Hall’s players.

Mozart’s Haffner Symphony launched the concert, and it was no less enjoyable or fulfilling than the main items in the second half. Elder directed from the harpsichord, integrating the instrument’s sound into the rest of the ensemble well. The clarity and bite of the string players was of a quality normally found only in period instrument orchestras, enhanced by the fact that vibrato was completely dispensed with.

The arresting opening statement of the first movement was contrasted with the dark sighing of the minor section, where dramatic crescendi through the chromatic scales made the performance the more gripping. The Andante was graceful, the ornamentation in the violins turning into a high pianissimo staccato accompaniment to the oboes’ sumptuous theme and the Menuetto had a delightful sense of comedy, with carefully pronounced contrasts of articulation.

The finale was gripping, starting with a subtle, insinuating figure that gave way to greater vigour; it reminded me of the opening of the Jupiter Symphony’s finale. The timpani had a special booming quality, the trumpets were excellent and the clarinet soared high above the rest.

It’s typical of Mark Elder’s seriousness of purpose that he could take Johann Strauss’ concert piece, the Rosen aus dem Sden Waltz, and make it just as entertaining as the rest of the programme. The warm bloom of the entire orchestra transported the audience back to the glamour of the Viennese courts. The opening was distinguished by a better horn section than the LSO has been sporting of late; the second waltz featured a trilling piccolo with plenty of attack; the third was more wistful; and the fourth featured exuberant trombones. More than anything, Elder brought a sway to the performance that evoked dancing.

The second half of the concert consisted of four long chunks of Richard Strauss’ most popular opera, Der Ronsenkavalier, featuring three distinguished female singers. Yet again, one was struck by the efficacy of concert performances of opera in the right hands. Liberated from the stilted world of directors’ ‘concept’ productions, singers and audiences alike can let their imaginations run free.

All three singers were equally good, with none outshining the others. But somehow the glamorous presence and ideal Straussian voice of the German soprano Anne Schwanewilms, playing the Marschallin, left an indelible mark on the memory. Sporting a red velvet gown, she inhabited the character with incomparable dignity and regality. Her characterisation and word-pointing in the Act 1 monologue showed a thorough engagement with the text, and there were some moments of breathtaking beauty, such as in the last few lines of the extract from the first act.

Rarely have I seen or heard such a full-toned Sophie as Susan Gritton. She strode onto the stage for the Presentation of the Silver Rose completely warmed up, and when her Octavian (the delectable Katarina Karnus) entered, the emotional flourish was just as Strauss must have intended.

It was also a pleasure to have such an extended extract from the final scene of the opera a large section from before the famous trio, as well as the closing duet and here the performance was just as engaging as any staged production. Elder’s pacing of the music, as well as the three singers’ total absorption into their roles, brought the evening to a tremendous climax. Schwanewilms’ aloofness, Karnus’ boyishness and Gritton’s vulnerability brought the situation to life, and their voices blended unusually well in the trio.

The loud cheer from the audience at the end said it all: we had been transported. It was another triumph for Elder and his team, a riveting concert of liveliness, variety and genuine passion for music. I may have to relocate to Manchester.