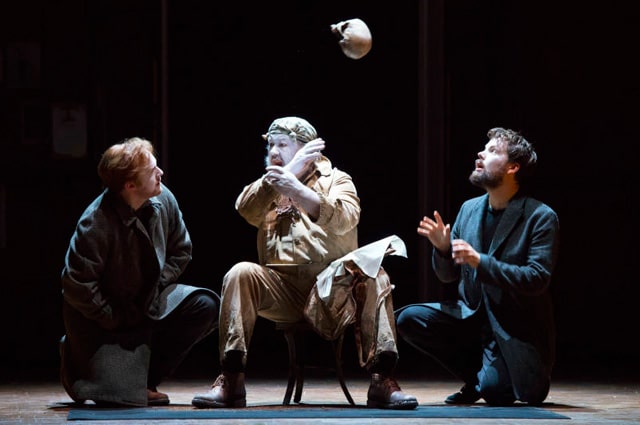 Hamlet is a story full of people it’s difficult to like, and Brett Dean’s eponymous opera – which also featured in the Glyndebourne Festival season this year – makes us fully aware of this. Hamlet himself (sung with masterly vocal stamina and a keen sense of dramatic timing by David Butt Philip) is portrayed as a full-on emo student, even more in need of a good slap than his straight-theatre counterpart. He’s paired with an Ophelia (sung with vocal brilliance by Jennifer France) who falls into that frequent trope of television crime-drama writers: the arty, fey, slightly bonkers girl who idolises Mr Moody, mistaking churlishness for profundity. Polonius (whose part is half-spoken, half sung, and depicted with just the right amount of clueless pomposity by Jeffrey Lloyd-Roberts) is made even more annoying than usual by Dean’s music, which causes him to repeat empty, throw-away lines over and over, as he turns them into nostrums supporting his own shallow understanding of the world; his bloody appointment behind the arras cannot come soon enough.

There were magnificent performances all round: William Dazeley’s Claudius and Louise Winter’s Gertrude both displayed a full, solid tone, indicative of their bulldozer resolve to seize power; Rupert Charlesworth’s light-voiced Laertes showed us what a weasel he is, and Horatio was sung with warm surety by Gavan Ring, highlighting his role as the only likeable character in the piece. Rosencrantz (Rupert Enticknap) and Guildenstern (James Hall) were cast as a pair of counter-tenor Thompson Twins, twittering away inanely, desperate to please. The rich bass voice of Brian Bannatyne-Scott made itself equally at home with the characters of The Player King, the Gravedigger and the Ghost of Old Hamlet, although the costume for the latter (possibly an old derelict covered in guano; possibly Rab C Nesbitt as a sloppy decorator) made one consider that the old king had probably been removed not a moment too soon if this was, as Hamlet croaks, “My father, in his habit as he lived”. 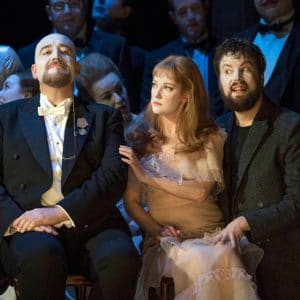 Dean’s orchestration is relentlessly busy, forming a counterpoint to the vocal lines, which tend, for the most part, to an aimless, tuneless, half-spoken recitative, that makes the first half, certainly, a bit of a trial. Like a stopped clock that’s right twice a day, however, this relentlessness occasionally becomes appropriate, and the big ensemble pieces at either end of the opera work well, as does Hamlet’s scene berating his mother. Some surcease occurs through the choral material that comes from on- and off-stage, although perhaps its charm lies in its role as foil, and it is difficult to imagine that it would stand on its own as ‘Choruses from Hamlet’. The sound-world created is full of texture, though – harp arpeggios, ghostly electronic and percussion rustlings, rumblings and clickings from all round the theatre as well as the pit, and, arguably, the most use of a contra-bassoon in any opera – all well controlled by Duncan Ward. Two scenes in the second half also offer variety: Ophelia’s (even) mad(der) scene, where Jennifer France’s dexterity above the stave comes to the fore, and Gertrude’s account of Ophelia’s death, in which France’s voice from the back of the theatre overlays that of Louise Winter, creating the two-timbre ‘possessed’ voice beloved of horror-film directors.

Neil Armfield’s direction is excellent, and works well with Jon Clark’s largely monochromatic lighting and Ralph Myers’ set, to imbue the production with a 19th-century Danish feel – the tall, 18th-century-palace windows, the dinner jackets, tail-coats and full gowns putting one in mind of photographs of those other dysfunctional royals, the Saxe-Coburg-Gothas and Romanovs, on holiday at Fredensborg prior to the first World War.