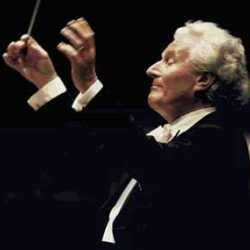 For his final concerts as Principal Conductor of the London Symphony Orchestra, Sir Colin Davis chose the most widely-performed and beloved oratorio of all, Handel’s Messiah.

Davis’ prowess in leading large choral and orchestral forces is well-established; however, he’s not an obvious choice of conductor for baroque music, and my fears that this might be a mixed experience were, sadly, well-founded.

In the piece’s most visceral moments, Sir Colin rose to the occasion with his customary brilliance: under his energetic direction, the choir Tenebrae gave a rousing rendition of Hallelujah, for instance.

Yet the alto’s aria He was despised was claustrophobically slow and incredibly tepid, partly due to the patchy English and unsteady phrasing of Sara Mingardo, who disappointed throughout the evening. Her rich, deep contralto voice did suit the character of Handel’s sensuous music quite well. But the language barrier was prohibitive to the communication of the words, and she seemed ill at ease for much of the evening. For the first time in my life, I sympathised with those who deplore the repetitive nature of the da capo aria.

Far more successful was bass Alastair Miles, who gave probably the best performance I’ve ever heard from him. To achieve such steady tone, fluid legato and powerful projection through arias such as The Trumpet Shall Sound and Why Do the Nations? is quite something for any artist. It was a shame that we didn’t hear much more from him; the printed texts annoyingly indicated the wrong singer for almost all the arias, so that one was frequently left wondering what the performance would have been like had it followed the (sometimes more sensible) voice allocations shown in the programme. I for one would much rather have heard Miles singing But Who May Abide than Mingardo: I’ve no idea why it was given to the alto after Miles had sung the preceding accompagnato with such impeccable line and dramatic pacing.

Soprano Susan Gritton has a very appealing floating quality to her voice, so that I Know that My Redeemer Liveth was a highlight. Occasionally, she lost pitch or swooped up to the higher notes in a less than elegant way, and it’s a shame she only attributed a single flock to the shepherds abiding in their fields, but her enthusiasm and sense of style easily overrode these quibbles for me.

Tenor Mark Padmore‘s opening items – Comfort Ye and Every Valley – found him under strain at the top of his voice. His pure tone seems well suited to the baroque, but his tuning was occasionally suspect and his phrasing wasn’t as smooth as is customary for him. Nevertheless, he sang with confidence, using the space comfortably with his voice, and his later arias were sung with more precision.

The vocal honours of the night went to Tenebrae, most of whose choral numbers brought the concert’s atmosphere into some sort of focus. His Yoke is Easy, And the Glory of the Lord and All We Like Sheep were three choruses that stood out for the crisp articulation of their canonic vocal entries. Shading and colour, dynamic contrasts and an awareness of text marked them out as the only performers on the platform who were truly at ease in this music.

The London Symphony Orchestra had its moments: a largely impressive trumpet soloist playing on a replica period instrument, a death-defying pounding by the timpani at the end of the Hallelujah Chorus and the splitting of the violins to emphasise antiphony brought character to the occasion. But the strings, who carry most of the evening orchestrally, seemed all at sea quite often. Some of them dispensed with vibrato in some numbers, whereas others larded it on the rest of the time. The Grave section of the Overture was performed with an effective contrast of dynamic between the first and second statements, but there was little sense of architecture or melodic shape.

I don’t by any means want to suggest that there is a ‘correct’ way of doing Messiah, but my problem with this performance was that its ‘intention’, for want of a better word, was unclear (to me, at least). Earlier in the year, Bernard Haitink’s Beethoven Symphony cycle with the orchestra showed how period performance practices can be brought to a modern orchestra and concert hall to interesting effect. But Colin Davis was only intermittently successful with this rendition of Messiah.

And if the second half achieved an atmosphere of spirituality and better pacing that would have easily brought the rating up to four stars, the enervation of great stretches of the first half keep it down at three a sadly underwhelming end to the LSO’s relationship with Sir Colin, which is without doubt one of the greatest orchestra-conductor teams of recent decades. Perhaps when they return to Berlioz and Benvenuto Cellini in June 2007, we’ll at last witness a more fitting apotheosis to their association.