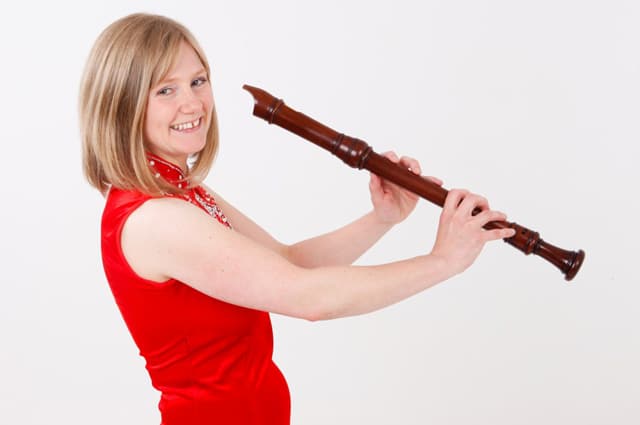 “Plugging into the Steinway of the future” declared the American magazine Newsweek in 1968 about Switched-On Bach, Wendy Carlos’ first album of J S Bach’s music realised on a synthesizer. The album was an instant success and began a career of synthesized classical tracks for Carlos, a high point of which was providing re-imagined ‘futuristic’ versions of Beethoven, Monteverdi and Purcell for Stanley Kubrick’s A Clockwork Orange in 1971.

As part of the Kings Place Bach Weekend, four well-respected performers in the field of Early Music assembled to create an evening of ‘lollipops’ in homage to Carlos’ ground-breaking album. Robin Bigwood, Steven Devine and Martin Perkins (all harpsichordists of note) were joined by the baroque recorder/flute-player Annabel Knight. The synthesizers used were all modern polyphonic instruments, allowing chords, and instant (and reliable) changes of sound – a long way from Carlos’ original vast monophonic instrument. Annabel Knight’s MIDI-interfaced ‘wind synthesizer’ would have been unknown to Carlos in the early days, although the use of vocoder techniques (by Bigwood via microphone and Knight via her ‘clarinet’) had arrived by the time Carlos re-imagined Monteverdi for A Clockwork Orange.

A couple of the pieces (the Sinfonia from Cantata 29 and the complete sixth Brandenburg concerto) were deliberate re-creations of Carlos’ originals, but much of the programme consisted of interpretations ‘in the style of’, albeit that they demonstrated all of Carlos’ classic techniques and sonorities. The opening ambient ethereality of the C-major Prelude (from Das Wohltemperierte Klavier) brought to mind Carlos’ 1972, self-composed album, Sonic Seasonings (or even, possibly, the lusher style of Isao Tomita’s 1970s electronic classical interpretations). Annabel Knight produced some yearningly expressive ‘oboe’ lines (insofar as MIDI-interfaces permit expression) in the Adagio from ‘The Easter Oratorio’, as well as a cleverly vocoded ‘tenor’ solo for Sanfte soll from the same cantata. Ich ruf zu dir, Herr Jesu Christ was full of floaty longing, and the clangs, quacks, whooshes and tinkling bells were all present in the joyfully busy counterpoint of the F-major fugue and the Prelude and Fugue in E-minor (again from Das Wohltemperierte Klavier), as well as the busy outer movements of Brandenburg 6. The set closed with a charming rendition (featuring Knight’s synthesized oboes and Bigwood’s vocoded ‘chorus’) of the death-is-round-the-corner tick-tock of the opening chorus of Cantata 8, Liebster Gott, wenn werd ich sterben?

It was a delightful hour spent revisiting the past, but it was most interesting, perhaps for the reflections it engendered about listening to the material in the light of  exposure to synthesizers in the intervening decades. When Carlos embarked on the use of the synthesizer for ‘classical’ realisations, she was reminding us that the newly-developed instrument could be employed by more than just electronic-physics-graduates-turned-musicians for their prog-rock concept albums; she was part of a generation of 1960s updated-Bach performers (Jacques Loussier, Ward Swingle) who enjoyed playing with the material, and understood how using a wacky-sounding keyboard could work with Bach’s line-driven contrapuntal style. Since then, synths have become commonplace: as economic alternatives to sessions musicians in mainstream pop; as part of the 1980s Synth-Pop scene (Kraftwerk, Yazoo, Erasure etc.); as cheap, cheesy music-providers for television (the vocoded aliens advertising instant mashed potatoes, and the synthed Wachet Auf accompanying Kenny Everett’s ‘Marcel Marceau’); as space-saving percussion sections in pit bands. This re-creation of pioneering work – in spite of the attention to detail paid to Bach’s ornamentation informed by post-Carlos discoveries of performance practice – invited a lighthearted, joyous reaction. Many of the audience seemed not to notice this, though, and instead of enjoying the whimsical fun of the evening (which clearly the performers did), opted to give it a more serious, beard-stroking reception.