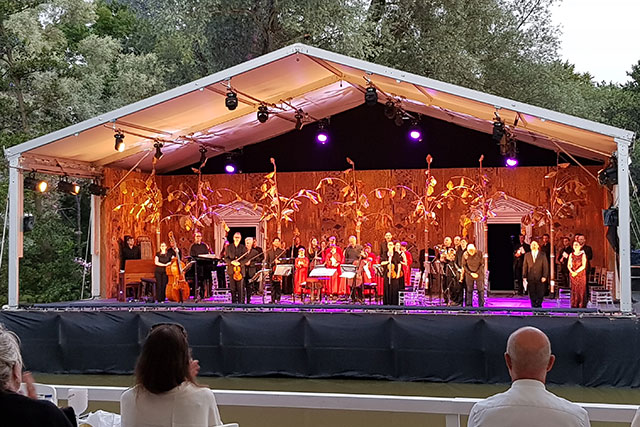 At the start of the evening West Green House Opera’s Chairman Glenn Hurstfield explained that this performance represented a first in three ways for the venue. It was the initial night of the 2021 season, and the festival’s first ever concert to consist entirely of choral music. For anyone who had attended an opera here before, however, it was the final first that would have been most obvious in that never before have audiences watched performances from across the water. This year, because of COVID-19 restrictions, the centre of the festival has moved from the Green Theatre to the lake itself. A stage has been built out from the island that stands in the middle of the water, with all audience members occupying one of four socially distanced marquees on the lakeside.

Howard Goodall’s Invictus: A Passion of 2018 is a thoroughly modern Passion in that, rather than taking excerpts from the Christian gospels to reflect on the final hours of Jesus’ life, it draws on a variety of more recent texts. Goodall took this approach, feeling that so many themes of the Christian Passion – “persecution of the innocent, malevolent authority exerting itself against ideas that threaten and challenge, the power of a peaceful, loving humility in the face of tyranny, the facing-down of fear” – have a universal resonance for people of all faiths and none. The composer was also taken with the roles of Mary Magdalene and Jesus’ mother Mary in the Passion, and, in line with this, chose writings from mainly female poets from the seventeenth to the twentieth centuries.

There is, of course, nothing new about applying different texts to traditional forms. In the War Requiem, Britten intersperses the standard words of the Requiem Mass with poetry by Wilfred Owen, while John Adams’ oratorios El Niño (2000) and The Gospel According to the Other Mary (2012) combine Gospel texts with writings from a vast array of times and cultures. In this way, Goodall’s fresh approach is grounded in longstanding traditions and the same might be said of the music itself. It feels innovative on the one hand and yet still seems to stand very much in the English choral tradition. The work employs an adult and boys’ choir (in this instance, Aurum Vocale and The Chapel Choir of Winchester College respectively) as well as two soloists (Mark Dobell and Kirsty Hopkins from The Sixteen), and the relationship between these elements is different, and constantly evolving, in each of the nine parts.

Much of the emotion is generated from the fact that so many sections hint at ambivalent feelings. For example, Part I features Ella Wheeler Wilcox’s 1877 poem Gethsemane, beginning ‘In golden youth, when seems the earth, A Summer land for singing mirth’. Goodall’s approach brings Butterworth’s setting of A Shropshire Lad to mind in that words such as ‘Loveliest of trees, the cherry now / Is hung with bloom along the bough’ are ostensibly evocative of beauty and pleasure, meaning that in both cases the music plays a large part in hinting at the more disconcerting elements that lie beneath.

“…never before have audiences watched performances from across the water”

Although the work is certainly not hyperbolic, it is theatrical in the sense that it keeps us engaged by constantly varying the mood, and introducing new elements and styles. As it rides the emotional colour wheel, it continuously projects the ‘action’ forward before identifying the occasional moment on which to stop and dwell. In this way, Part V, Invictus (William Ernest Henley’s 1875 poem sung by Mark Dobell), is a ‘showstopper’ in the literal sense that it feels both like a climax and a moment to reflect (a large pause followed its conclusion). However, the pace of the opening to Golgotha that followed possessed an ‘on with the show’ element in a part that felt vaguely reminiscent of Jake Heggie’s Camille Claudel: Into the Fire (2012). Just how poignant the piece could be is illustrated by the guilt one felt on hearing Part II, Lamentation which presents Frances Ellen Watkins Harper’s 1854 poem The Slave Auction, sung by Kirsty Hopkins. This is because it was hard to accept that this incredibly beautiful composition could have derived from something so terribly awful. However, with the line from William Wilberforce’s speech to the House of Commons in 1791 ‘You may choose to look the other way but you can never say again you did not know’ permeating the text on several occasions, we could be left in no doubt that this Passion is ultimately about all of us.

Howard Ionascu conducted the Lanyer Ensemble extremely well, while the first half of the programme featured Vivaldi’s Beatus Vir, Handel’s Where’er you walk, Mozart’s Laudate Dominum and Goodall’s setting of Psalm 23 (more popularly known as The Vicar of Dibley theme tune). These featured, among other things, several notable solos from members of Winchester College Chapel Choir.

The 2018 recording of Howard Goodall’s Invictus: A Passion, which also features the Lanyer Ensemble and soloists Mark Dobell and Kirsty Hopkins, is available on the Coro label.