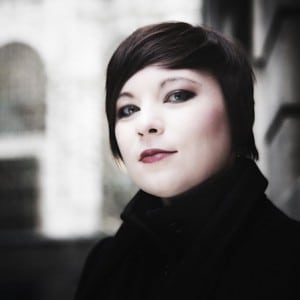 Opera Holland Park strives to include at least one rarity in every season, and this year it has delivered handsomely with a stirring production of Ermanno Wolf-Ferrari’s I gioielli della Madonna (1911).

Set in Naples around the feast-day of the Madonna del Carmine, it focuses on the blacksmith Gennaro and his adoptive sister Maliella, who is determined to escape from her repressive home. When Rafaele, the boss of the camorra (the Neapolitan equivalent to the mafia) tells Maliella he will steal the statue of the Madonna’s jewels for her in a blustery show, Gennaro in his own attempt to win her actually does so. Gennaro subsequently ‘rapes’ Maliella before Rafaele casts her out as he was seeking a pure conquest. Fearful of even being associated with stealing the jewels, the camorro desert Gennaro, who returns them to the statue of the Madonna and believes that she forgives him before he stabs himself.

Even in exploring the clash between spiritual values and primal instincts, neither the opera nor the production imply that religion is purely a self-serving device to achieve earthly ends. The reverence the people show for the Madonna is tangible, suggesting that they see her as setting an ideal that they should aspire to, regardless of the fact they will inevitably fall short. Even the camorra set the limit at dishonouring her, although it could be argued that their fear is the damage caused to themselves by being seen to have done so.

Despite the excellent staging, Act I proves wanting as the chorus, while producing an overwhelming sound, sometimes drowns out the orchestra and proves weak in enunciating. Everything changes after the interval, however, when the three principals also get more into stride. Act II benefits to an extent from featuring no large choruses, which enables a better balance between singers and orchestra to be achieved, but when the hordes return in Act III the standard remains just as high.

With her vibrant soprano instrument Natalya Romaniw provides a thorough exploration of Maliella’s character. In her desire to be free she is similar to Carmen, but, with her opaque origins and stifled life, is a far more vulnerable character. If Maliella boldly proclaims her desire for kisses, craziness and the ‘handsome and passionate’ Rafaele, it seems clear that deep down she craves the true love of a loyal man. With his engaging tenor voice, Joel Montero makes us feel for Gennaro on every step of his journey as he presents a serious individual who has none of the charm or outward show of Rafaele. When his uncharismatic personality combines with such strong feelings for Maliella he resorts to desperate and drastic actions as he steals the jewels and takes her when he has the opportunity.

Olafur Sigurdarson, with his resolute baritone instrument, provides a convincing portrayal of a figure who all the women know is a (potentially dangerous) rotter, but are happy to love and go for anyway. He does this by taking the audience with him for a surprisingly long way, although even they cannot fail to be shocked by the way in which he latterly treats Maliella.

Act II is especially effective as the City of London Sinfonia, superbly conducted by Peter Robinson, excels, especially in the Introduction as the flute and harp alternate with the strings’ languishing melody. That the theme is played before a flashing neon lighted arrow advertising ‘donne’ helps to highlight the sadness of the music and tragedy of the situation. Similarly, Maliella’s house is shown as a series of boarded up fences that suggest imprisonment.

The strength of the production, however, rests on its ability to temper different emotions. This is no better illustrated than in Act III when the frenzied dance has just enough of a playful edge to make it come across as even more sinister, and the ending which Montero’s engaging voice helps us to feel is as uplifting as it is so obviously tragic.

For details of all the productions in Opera Holland Park’s 2013 season click here.