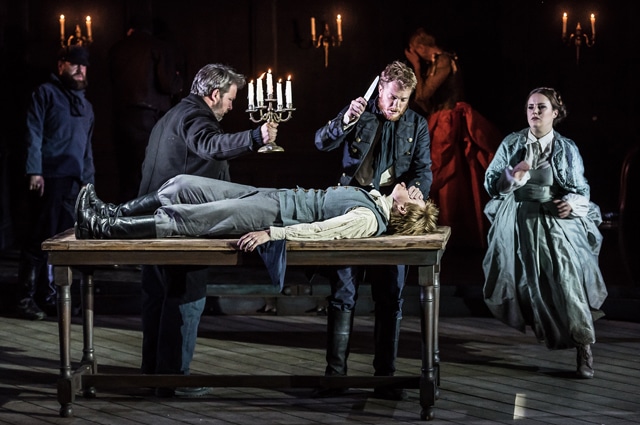 An Idomeneo actually set on a bleak sea shore, and not in a ferry terminal? An Idamante who can actually sing all the notes? The sublime king / princess scene delivered whilst doing something entirely appropriate instead of a display of vamping and groping? An Idomeneo for whom you actually feel something akin to pity and terror? True, things do appear to suggest that the Swedish Royal Family has decamped to the coast, swapping its pale blue 18th century rooms for rather more cramped conditions, and the assorted fish-gutters do seem to have wandered in from Peter Grimes, but those are details which don’t send us heading for the emergency exit – especially given the quality of much of the singing.

Idamante is one of those roles where the casting seldom pleases everyone, but Garsington gets it right for us, with the superb mezzo Caitlin Hulcup, who can add this debut to her rapidly growing list of triumphs. She looks absolutely convincing as a young prince, and plays the part of the king’s son with such assurance that it’s sometimes hard to remember that this is actually a girl. Her singing is truly Mozartean, with finely nuanced phrasing even in such small moments as ‘O dolce nome!’ and attention given to the subtleties of the arias, which are sung with exceptional beauty of tone and dramatic commitment.

Timothy Robinson is a superb Arbace – just as we would have loved to hear the Idamante sing ‘Non temer,’ Arbace’s full aria would have been welcome from him. It’s a testament to the quality of this house that it is able to cast the roles of Arbace and the ‘High Priest’ (Robert Murray) with tenors who could equally well sing the title role. That was taken by Toby Spence, treading very finely on the crucial line between chewing up the carpet and aloofness which this role requires: he may not have exactly the mellifluousness which one might like, but his characterization is compelling and his singing always wholehearted and phrased with distinction. ‘Fuor del Mar’ was about as easy for him as it is for most other singers, that is, not at all, but he rose to most of its challenges, and he was a tower of strength in the noble, solemn quartet.

After her superb Leonore in Garsington’s 2014 Fidelio, it was a joy to welcome back Rebecca von Lipinski, whose voice is ideal for Elettra since she is one of the few sopranos who can make near-hysterical despair sound beautiful – her arias were both eloquently sung and impressively characterized. Louise Alder’s Ilia was a vulnerable, sweet-toned princess and although parts of her opening aria were a little uncertain, she sang ‘Se il padre perdei’ with real style. 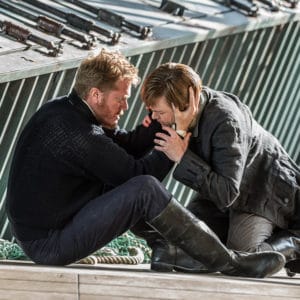 How to stage the intervention of Neptune, without making the audience titter? This production does it with brilliant simplicity – we won’t give away the coup de théâtre, suffice to say that it involves a sense of emergence from the sea, and that in Nicholas Masters we heard a bass voice which really is suited to impersonating one of the gods.

The chorus had a lot to do in this production besides singing their music – which they did superbly, especially in ‘Placido e il mar.’ It’s not unusual for an Idomeneo chorus to stand still or maybe brandish a few weapons, but this group had to appear variously fresh from a spot of fish-gutting, exhausted from a sea voyage and horrified by a particularly gruesome type of ‘monster’ – of course it helped that they had been given interesting actions to perform, and that the ‘monster’ was achieved with the same clever simplicity as the appearance of Neptune – suffice to say, no sharks, plastic or otherwise, are involved.

Tim Albery’s production, with Hannah Clark’s spare, elegant designs, does not force its theme at you with the now near-obligatory, dreary parade of combats, hapless populace obliged to cheer their ‘great leader,’ AK47s, ‘fascist dictators’ and other sundry clichés, opting instead to give a vision of a world as dependent on the sea as that of Peter Grimes, and one in which those who have escaped persecution by either man or nature are welcomed by those whose own lives are lived in almost equally precarious circumstances. Albery has described Idomeneo as possessing an “essential wildness” and the stage pictures evoke this finely, the ever-present sea and the greyness of the shore contrasting with the elegance of the costumes.

Tobias Ringborg, making his Garsington debut, directed the orchestra from the fortepiano. He is most definitely a singers’ conductor, and the playing on this occasion was of a chamber music quality, sometimes erring a little too much on the side of intimacy, although the grand, elemental effusions were well managed. The cast, production team and orchestra were given a rapturous ovation, and rightly so.