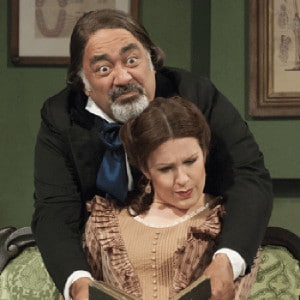 This Il barbiere di Siviglia comes with a heavy dose of social realism! Well, that may be pushing the point too far, but Oliver Platt’s new production for Opera Holland Park does make the opera feel a little grittier than usual and, because his ideas are well executed, this proves to be all to the good.

The setting is transferred to the streets of Victorian London complete with lamplighters and Bow Street Runners (Figaro’s cart still possesses a sign in Italian but if the singing is in that language then so too should any writing). If moving the action closer to home automatically removes the sense of exoticism we may glean from thoughts of Seville, Neil Irish’s set makes the whole affair feel even less fanciful again. It consists of a row of houses of dark brick and stucco. Each meets the next at a jagged angle so that the entire street creates an arrowhead with Dr Bartolo’s house appearing at the centre of the row, and hence the front of the stage.

When the set opens out to reveal the house’s interior we realise that Bartolo is not just a little hard up, but has been forced to sell his house and downgrade to a humble terrace. This is because the furniture is more lavish than the room it occupies, suggesting that he took it with him when he moved. More generally, Platt’s ideas are followed through well with drunks and tramps frequently gracing the stage. Excepting two soldiers among their number, the musicians at the start look so scruffy that one suspects Fiorello has just found them in the nearest pub and they have simply wheeled the piano they use out into the street with them.

The touches throughout are excellent in both their thought and variety, with the barber’s chair feeling like a torture aid. Dr Bartolo places Rosina in it to sing ‘A un dottor della mia sorte’ standing over her, and in Act II when Bartolo is shaved he is fastened into it with handstraps. At the end of Act I when Almaviva insists on being billetted at Bartolo’s house, the entire cast and chorus build a barricade out of his furniture and shut him in his own house, with the title of the finale explaining how they are able to do so. The turn of events have ensured that Dr Bartolo is ‘Fredda ed immobile, comme una statua’ or ‘Cold and still, just like a statue’. After Rosina discovers Lindoro’s apparent treachery she sits still as if at the vortex of a storm, with her turbulent state of mind being illustrated through the music and the people outside running to get out of the rain.

Not every scene feels so innovative with the staging of ‘Largo al factotum’ taking us nowhere we night not expect to go in the chosen setting, but many more moments hit the mark than miss it. For example, we don’t just glimpse the tip of the ladder disappearing from the window, but see Dr Bartolo and Berta shuffling off with the unwieldy object. It is a simple move that proves a masterstroke because it epitomises Platt’s aim to describe the situation ‘warts and all’, and to reveal the ignominious depths to which Bartolo has sunk.

Matthew Waldren’s conducting is highly intelligent and controlled, and generates some beautiful playing from the City of London Sinfonia. Occasionally, it feels as if he could do more to bring out some of the bubbly passion in Rossini’s score, although the cleanness and balance of sound he achieves goes a long way to generating excitement in its own right.

The cast also proves strong as the principals really enter into the spirit of the production. As Count Almaviva, Nico Darmanin’s voice feels a little tight and restricted in ‘Ecco ridente in cielo’, but it picks up well after that and, although it is perhaps not the most lyrical to be found, it feels highly suited to delivering the type of characterisation demanded by this production. The music lesson is skilfully executed where, as a phoney teacher, Darmanin oscillates between flamboyant, exaggerated gestures and having to watch Rosina very closely as she sings. After all, Almaviva is presumably pushing his abilities to the limit just in trying to keep in time with her on the harpsichord.

Kitty Whately as Rosina reveals a beautiful voice as she tosses out velvety coloratura with ease in ‘Una voce poco fa’. Other portrayals of Rosina may have made her more of a bubbly, bored little madam, but in Whately’s portrayal it is her sheer determination that comes to the fore, and bringing out this facet of her character works well with the gritty nature of the production. Nicholas Lester as Figaro has a strong baritone  and commanding presence, while Jonathan Veira as Dr Bartolo reveals excellent enunciation as he reels off his tricky lines, and a good penchant for comic timing as he tries to maintain authority with a huge blob of shaving foam on his nose. Nicholas Crawley, replacing William Robert Allenby as Don Basilio for at least the first two performances, is suitably menacing in his ode to calumny, while Alinka Kozari leaves us lamenting the fact that Rossini only gave Berta the one aria.