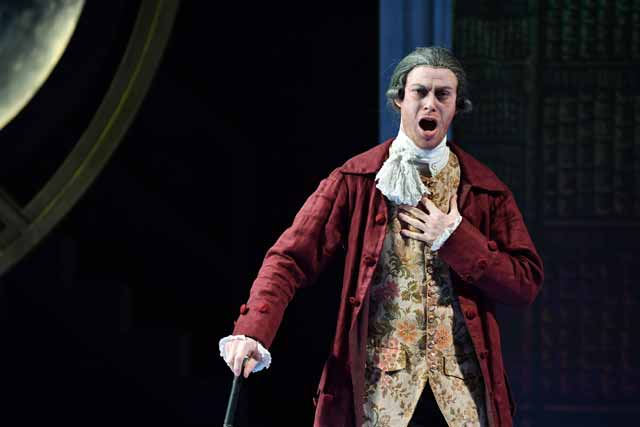 Haydn’s Il mondo della luna of 1777 utilises a libretto by Carlo Goldoni first written in 1750 and forming the basis for at least six other operas. It is a typical story of an older man attempting to stand in the way of young lovers, who in turn take steps to outwit him. Unlike Il barbiere di Siviglia and Don Pasquale, however, they do not do so in his own house, but rather in the greatest of fantasy realms as they simulate a trip to the moon.

Ecclitico, a would-be astronomer, loves Clarice, the daughter of Buonafede, while the nobleman Ernesto loves her sister Flaminia. Buonafede, however, will not agree to the men marrying his daughters as he wishes them to wed wealthy suitors, or to Ernesto’s servant Cecco marrying his maid Lisetta as he has designs on her himself. Ecclitico shows Buonafede his telescope, which he claims is so powerful it can be used to observe the activities of people living on the moon. Buonafede is extremely impressed when he tries it, not realising that Ecclitico has simply asked his servants to act out the appropriate scenarios in front of the lens. Having got Buonafede excited, Ecclitico suggests they drink an elixir that will transport them to the moon. Buonafede agrees, and does not realise when he is given a more conventional drug that sends him to sleep and makes him dream of flying.

When he awakens he believes he is on the moon, but it is simply a fantastical landscape that Ecclitico has created in his own garden. Cecco appears disguised as the Emperor of the Moon, and Enrico as the star Hesperus. In time, Lisetta, Clarice and Flaminia also arrive and through a series of masquerades and manipulations, the three couples gain Buonafede’s consent to marry, though he grows increasingly sad as his daughters and his own fancy Lisetta walk away with others. He becomes angry when he finally realises he has been duped, but, back inside Ecclitico’s house, he accepts the situation and gives the three couples his blessing as well as considerable dowries.

Although on the surface the plot seems light-hearted and almost whimsical, it does contain hidden depths. The word ‘lunatic’ takes on a double meaning as Buonafede uses it to describe a person with an affinity with the moon, yet in identifying as one he is more obviously becoming a madman. Similarly, the fact it is the lowest ranking character who becomes the Emperor reveals how the moon presents the world turned upside down in more ways than one. There is, however, a class system in play, which restores itself entirely at the end as Buonafede gives Ecclitico and Ernesto 6,000 scudi by way of a dowry, but Cecco only 1,000. True, the first two are marrying his own daughters rather than his maid, but it still says something about the hierarchies involved.

If the opera can be taken on many different levels, the same could be said of   William Relton’s production for the Royal College of Music, which is extremely colourful and dynamic yet also shows an exquisite attention to detail. The level of thought is clear from the start as the simulation of the scenes taking place on the moon that Buonafede views sees chorus members, dressed up especially in big noses, run behind a screen made to look like the moon. The scenes themselves, however, utilise graphics on the screen, which are not only skilful in their own right, but retain enough distance from reality so that one depicting a man beating a woman remains in good taste.

In Ruari Murchison’s sets, Act I features a generally chiaroscuro aesthetic as the moon stands in the background. This contrasts markedly with Act II, which takes place (supposedly) on the moon and, with a huge earth forming a backdrop, is as colourful as it is fantastical. Enormous flowers grow all around, while fun effects such as birds ‘flying’ down diagonal wires work well in a way in which they would not in a larger venue.

The men who make up the chorus prove crucial to the evening, as they bring colour to everything they do. During the opening hymn to the moon they look confused as they try to read from each other’s music, even as they sing it very well. Then throughout the opera they don a large number of costumes as they are required to act and dance as much as sing. They even carry out all of the ballets, choreographed by Phillip Aiden, in Act II with a knowing wink as they throw themselves completely into executing them. There is also satire as they wear masks of contemporary figures to illustrate, as an aria describes, the miser (Donald Trump), the proud man (Vladimir Putin), the jealous man (Boris Johnson) and the ambitious man (Kim Yong-un). By the time Jacob Rees-Mogg, Ann Widdecombe and Nigel Farage have also been introduced in equally realistic masks, it feels like a pretty creepy routine!

The cast is excellent, with several outstanding performances. Theodore Platt as Buonafede reveals an extremely well developed baritone, and when on the ‘moon’ arouses our sympathy as, donning purple dungarees, he reveals joy at everything around him and sorrow as everyone seems to slip away from him. Jeremy Kleeman offers an incredibly warm, smooth and secure bass-baritone as Ernesto, while as Flaminia Charlotte Bowden displays amazing coloratura while also managing to coordinate it with the movements of her badminton racket. There is not, however, a single weak link among the cast (Cast A, though with Bowden stepping in from Cast B, when I attended), which includes Ted Black as Cecco, Anna Cooper as Lisetta, Glen Cunningham as Ecclitico and Natasha Page as Clarice, while the orchestra, under the baton of Michael Rosewell, is on dazzling form. This production, along with the Guildhall School of Music and Drama’s presentation of La fedeltà premiata earlier in November, makes a very strong case for why Haydn’s operas deserve to be heard a lot more.