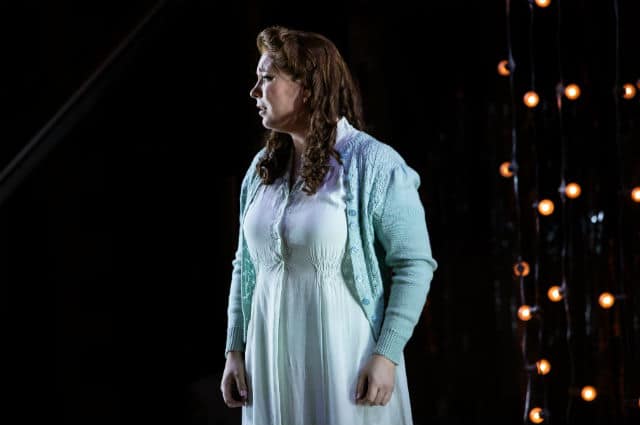 It is hard to imagine a more perfect setting than Opera Holland Park for Ermanno Wolf-Ferrari’s rarely performed Il segreto di Susanna of 1909. This is because the Royal Opera House would be too large a venue for this one act comedy that involves just three characters, and yet one can picture a production in a pub theatre comprising too many big actions in its pursuit of big laughs. The beauty of John Wilkie’s production is that it is extremely funny, and yet every gesture and effect is measured out so well that the piece never once feels as if it has descended into cheap farce.

The opera, with libretto by Enrico Golisciani (although the premiere in Munich saw this translated into German by Max Kalbeck) sees Count Gil suspect his wife the Countess Susanna of having an affair since he keeps smelling smoke on her. He thus attempts to expose her secret, but his increasingly desperate attempts to do so all come to nothing because there is no other man, with her secret being that she loves to have a smoke! Although it is not often seen in opera houses today, it represents one of several pieces that the composer wrote (Le donne curiose being another) in which people are suspected of doing terrible deeds, when in reality they are engaged in something quite harmless. The big joke, however, is that the music is so accomplished that it hands a sense of monumentality to the suspicions, which gives the viewer the best of both worlds. On the one hand, it means they enjoy excellent music, and here almost every Italian operatic style and device can be heard, along with a little Romanticism. On the other, they are treated to something highly entertaining as Gil and Susanna talk at cross-purposes in hilarious exchanges that would feel quite at home in any British sitcom from Some Mothers Do ’Ave ’Em to Coupling.

The mood is established by takis’ set, in which Gil’s house sees a beautiful panelled wall run the entire length of the broad stage. This instantly gives the setting a feeling of elegance as it seems modern for the early twentieth century, and thus emphasises the Count and Countess’ sophistication. Then the Prelude sees the servant Sante and two maids (an addition to this production) running about the place, dusting and decorating it with flowers, in a slick routine that sets the tone for the rest of the performance. Along the way, there are some ‘laugh out loud’ moments as Sante (also a smoker) is forced to hide in a chest and then emerges from it surrounded by clouds of smoke. Overall, however, the humour derives from the refinement on offer as Susanna and Sante intertwine their arms to puff on their cigarettes as they enjoy a secret smoke. Clare Presland and Richard Burkhard both sing and act the parts of Susanna and Gil extremely well, while John Savournin may normally be a bass-baritone but comes across here as an expert silent actor as he plays the non-singing role of Sante.

John Andrews conducts at a seemingly perfect tempo, and, although the piece is very light, it still makes one think. It is highly revealing of wider attitudes that at the start of the twentieth century a woman who smelt of smoke was automatically assumed to be having an affair, because no-one could picture the idea that she might want to enjoy a cigarette for herself.

If the first half of the evening executes a neat little comedy to perfection, the second achieves the same standard with a very different piece, thus helping the event to feel as balanced as it is undoubtedly accomplished. Iolanta is directed by Olivia Fuchs and conducted (brilliantly) by Sian Edwards, but once again everything starts with takis’ set. In it a proportion of the garden is obscured by polythene sheeting so that on occasions Iolanta is glimpsed through it, but the most intriguing feature is a set of intertwining illuminated rods that stand to the left. These represent the mountainous terrain that leads to Iolanta’s remote garden so that when characters enter they step over one and duck under another to symbolise their journey to reach her.

There is a beautiful aesthetic to all aspects of the design, as the chorus of attendants wear monochrome colours and scarves that are blindfolds. Periodically they wrap these around their heads but use them not to cover their eyes, but their mouths, thus revealing how the real disabling factor is not Iolanta’s blindness, but their inability to speak about it. Three sets of lights hang from the ceiling, each forming a cylindrical shape, as might be found in the gardens of many summer opera venues at night. When Iolanta gives Count Vaudémont the white roses, she picks and hands him some of these, thus revealing how she is metaphorically a giver of light.

If everything is set up strongly to begin with, the performance is made special by the standard of singing, which is not just good but truly extraordinary. In the title role Natalya Romaniw reveals a soprano that is full and powerful, yet nuanced and exceedingly beautiful. As Count Vaudémont, David Butt Philip’s tenor is so expansive that rarely have I heard top notes sung with such cleanness that there is never a sense in which anything is going to waver, even for a millisecond. If overall, however, this counts as the best singing I have ever experienced at Holland Park, and indeed some of the best in any venue, it is also because the rest of the cast perform so well with Grant Doyle’s Robert, Mikhail Svetlov’s King René, Ashley Riches’ Ibn-Hakia and Barnaby Rea’s Bertrand standing out in particular.

The measure of how entrancing this performance is is that we find ourselves positively willing Robert to tell the truth at the end, and for René to rule in Vaudémont’s favour, because we feel so emotionally engaged with the characters that we want everything to work out for them. By the time of the closing chorus, we are overwhelmed beyond belief, and it is impossible to speak too highly of this double bill that, along with L’arlesiana, closes Holland Park’s 2019 season.