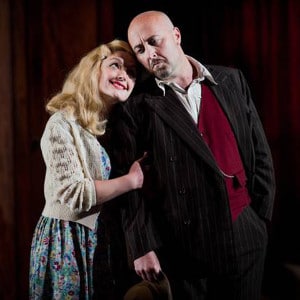 One of the most intriguing aspects of Opera Holland Park’s production of Il trittico, which opens its 2015 season, is just how well each of the three operas has been worked to suit the time of day at which it is presented. This is no mean feat because it may not immediately seem obvious that the first opera, Il tabarro, is the best one to work in the sunlight and the final offering, Gianni Schicchi, the piece of choice for the dark.

Il tabarro, directed by Martin Lloyd-Evans, exploits the sheer breadth of the stage to introduce a virtually full-size barge, complete with every day embellishments such as potted plants and watering cans. When Richard Jones produced the work at the Royal Opera House in 2011 he presented the darkest image imaginable of the bargeman’s life, with the water being pitch black and factories and warehouses coming right up to its edge. Here, in contrast, the natural light ties in with the opera’s mention of a September sunset, and suggests that while the way of life may be hard it alone is not responsible for the disaster that unfolds (although the background of poverty may be a necessary condition). This forces us to focus more on the plights and needs of the individual characters, and because the set-up feels slightly lighter than usual there is a greater sense in which the atmosphere really transforms over the hour.

Anne Sophie Duprels is a sublime Giorgetta and Sarah Pring an excellent Frugola, but it is Stephen Gadd’s Michele that stands out with his full and striking voice. Until he commits the murder he makes us feel deeply for him as he reveals his own needs and sympathies. In this performance the loss of their child is as much Michele’s tragedy as Giorgetta’s as he too craves returning to how things once were. He also shows some sensitivity towards Luigi, Tinca and Talpa, even if his sympathy for them reveals a masculine attitude as it is based on the premise that the wife is entirely in the wrong.

Amidst the poignancy of the scenario, the impact of the ending is slightly marred by two minor issues. It hardly comes across that Luigi returns to the barge because he sees Michele’s lit pipe and thinks it is Giorgetta’s signal, while Luigi’s body is so scantly covered by the cloak that Giorgetta would have instantly seen it the moment she came remotely close to Michele. These are not only problems from a dramatic perspective. We lose the sense of irony on the former point, while the latter removes the whole idea that we all hide beneath cloaks.

Behind the barge in Il tabarro lies a row of arches that represent the quayside and mirror those of the ruined Holland House that stands beyond. The formation of these is altered to create the convent in Suor Angelica, which is made to feel genuinely lived in by the presence of laundry baskets and washing lines. It is still light at the start, which ties in with the water in the fountain turning golden under the setting sun, but as the situation grows increasingly dark so too does the sky outside. The voices of Anne Sophie Duprels as Suor Angelica and Fiona Mackay as La Badessa are hardly identical in sound but both are possessed of thick, vibrant shades and some thrilling darker hues, meaning that they work very well together.

Rosalind Plowright puts in a typically stunning performance as La Zia Principessa and her scene with Suor Angelica is highly poignant, especially when Angelica, heart broken but still with a touch of defiance, advances towards her to give her the signed document. The agitation she shows at the moment at which she realises her suicide constitutes a mortal sin is deeply disconcerting as it is so out of step with the inner peace we might expect to see in a nun. This, in itself, is reflective of Oliver Platt’s production, which never paints too rosy an image of convent life as one nun’s penitence includes receiving a brutal blow.

It says more about the other two operas that Gianni Schicchi, which still concerns death, greed and deceit, should provide the evening’s light relief. The production of this opera first came to Holland Park in 2012, but while three years ago it used the same set of half-plastered walls as the piece with which it was then coupled, Mascagni’s Zanetto, this time it plants itself within the same arch formation as is used for Suor Angelica.

In 2012 Lloyd-Evans’ production was certainly amusing but it felt as if it was trying too hard to be funny. Revived here by Platt, it now feels sharper so that the humour and energy remain but feel far better controlled. For example, the body of Buoso di Donati is tugged, pushed, pulled and dropped as much as before but his groans during the silent opening are kept more in check and so feel less grating. William Robert Allenby is a superb Simone while Anna Patalong as Lauretta gives a moving rendition of ‘O mio babbino caro’ as her beautifully soaring voice combines with immaculate phrasing. It is, however, Richard Burkhard’s Gianni Schicchi who steals the show as he adjusts his voice from Buoso’s to his own every time he sings of leaving possessions to ‘Gianni Schicchi’, and hides his hand in his sleeve to remind everyone of the consequences of giving the game away.

Stuart Stratford conducts superbly, although the generally subdued nature of these scores may make them suffer in the tented area’s acoustic, and the consequence is that Opera Holland Park’s 2015 season has got off to an ambitious, but highly successful, start.