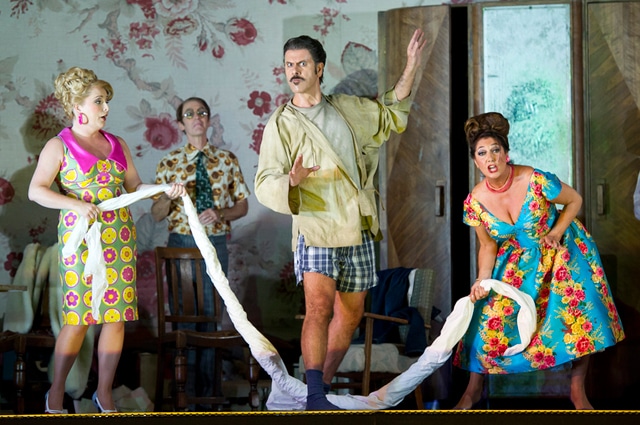 Of course such an undertaking makes huge demands on any opera company, both physical and financial, which is probably why we’ve had to wait almost five years for Richard Jones’ highly acclaimed staging to return to Covent Garden. It would be good to report that its return was an occasion for rejoicing and exuberant flag-waving, and in one case it was, but otherwise this revival was patchy to say the least.

Let’s get the horror out of the way first; Il tabarro was an unmitigated disaster. Nicola Luisotti is a conductor whom I have admired greatly in the past but his take on Puccini’s opening slice of sordid life aboard a barge moored on the Seine was indulgent, verging on the schmaltzy. The opening motif conjures up the image of water gently lapping the side of the riverbank and is redolent of Debussy, but that doesn’t mean this opera should be conducted as if it were Pelléas et Mélisande. If any of the three principals had been up to the task this wold probably have mattered less, but all three of them failed to hit the mark, indeed together they have the dubious accolade of producing some of the worst singing I’ve heard in any opera. 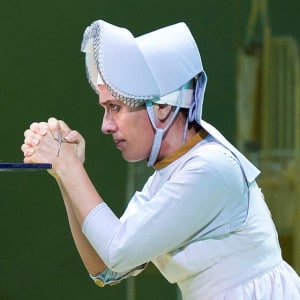 The vagaries and mysteries of the Royal Opera casting department often leave us scratching our heads, but given that Lucio Gallo’s Michele was the weakest link when the production was new, being underpowered, and with non-existent high notes, his re-engagement was utterly baffling. Needless to say the intervening years have taken even more of a toll on his voice, so for most of the time from my seat in the Amphitheatre he was virtually inaudible. Bumpy phrasing, intonation problems, and lack of volume affected Carl Tanner (Luigi) and Patricia Racette (Giorgetta) as well. Let’s just draw a veil, or even better a cloak, over the whole sorry affair.

Who’d have thought a superfluity of nuns could raise the temperature of anything, but as the offstage chimes of the convent bells ushered in Suor Angelica, the evening took off. Quite rightly Jones is having none of the quasi-religious sentimentality which usually turns this opera into an over indulgent Catholic lollipop, and in Miriam Buether’s claustrophobic set we’re transported to a children’s sanatorium, which gives added poignancy to poor Angelica’s plight. To see an artist grow and develop into a role is one of the most rewarding aspects of this job, and whilst Ermonela Jaho was impressive last time round, here she was simply sensational. The voice is far more under control, and the sound she now produces is beautiful from top to bottom. Her diminutive figure combined with her searingly intense interpretation of the role makes for one of the most emotionally shattering performances to grace this stage in years – it was nothing short of a triumph. She rightly deserved her thunderous ovation at the final curtain. With a great supporting cast including Ann Larson as the implacable Princess, this was an hour of music theatre that will linger long in the memory.

After a murder, and a suicide, the comedy of Gianni Schicchi comes as a welcome relief. Gallo was back in the title role, but his waning vocal resources were less of a hindrance here as you can bluster your way through the role and just about get away with it, as he did. Jones’ staging remains a joy and repeat viewings (this was our fourth) don’t diminish its razor-sharp humour, here dispatched by a wonderful ensemble cast once again led by the indefatigable Gwynne Howell (Simone) and Elena Zilio (Zita). John McFarlane’s designs propel us to the ‘60s and within this filthy milieu the way in which this egregious bunch of individuals attempt to get their grubby mitts on Buoso’s inheritance is gloriously etched. Newcomers to the cast included an attractive, if small voiced, Paolo Fanale (Rinuccio) and Susanna Hurrell as a glorious Lauretta. A mixed-bag then. Suor Angelica and Gianni Schicchi are definitely worth catching, so it maybe best to enjoy an extra glass of bubbly at the bar and give Il tabarro a miss. Just a thought.