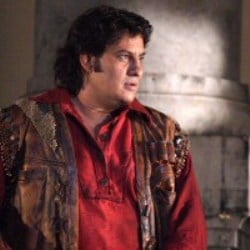 Il trovatore is one of opera’s typical contradictions: it’s amongst Verdi’s most popular and beloved scores, yet its critical reception has always been mixed. That’s largely because of its story, which appears to be utterly ridiculous on paper. Two brothers, a Count and a troubadour, both love the same woman, Leonora but they don’t know they’re brothers. The Count captures Manrico, because Leonora prefers him; Leonora offers herself to the Count in her beloved’s place but poisons herself before he can possess her.

As the Count sends Manrico to his execution, Azucena, the gypsy whom Manrico has been falsely raised to believe is his mother but has only brought him up in place of her own son, reveals that Manrico was the Count’s long-lost brother.

It sounds ludicrous, but in a strong musical performance and a production that treats the opera without embarrassment, Il trovatore is equally as compelling an experience as the other so-called ‘mid-period’ Verdi operas, Rigoletto and La traviata. Happily, that’s precisely what it gets in the Royal Opera’s second revival of Elijah Moshinsky‘s 2002 production. The director has returned to revise his original thoughts on the piece, and where it was originally a little static in places, this time around it seems to respond more fully to the melodrama inherent in Verdi’s music. Il Conte di Luna is suddenly a more driven character; Azucena is so haunted that she seems almost to be communing with the Devil; Leonora has more dramatic pathos; and even Manrico has greater psychological development.

The main reason for the revival’s success, however, is the utterly gripping conducting of Royal Opera debutant Nicola Luisotti (who returns in February for Madama Butterfly). Rarely in recent times have the chorus and orchestra of the Royal Opera House sounded so well rehearsed or so decided in their performances; I don’t think I’ve heard such an outstandingly conducted Verdi production since Edward Downes led the company in Rigoletto in 2005. Even the Prelude was striking: the timpani rolls were genuinely arresting, the string melody lovingly shaped. Luisotti evidently appreciates how fine an orchestrator Verdi was, too, because I heard many woodwind colours that often go overlooked by others, and the important role of the offstage voices and instruments was here given its due prominence. This young conductor is a marvel: let’s have him back soon.

The other success story was Stephanie Blythe‘s role debut as Azucena. Her thrilling tone, controlled vibrato and dominating stage presence are perfect for the part, and she’s easily as good as she was in the revival of Un ballo in maschera in 2005, if not better. Anthony Michaels-Moore deserved greater applause for his singing as the Count (perhaps the audience refused to hail the baddie?), for his naturally aristocratic sound is superb for this music, he has a sense of Verdian style, and he was the most convincing actor on the stage.

As Manrico, Marcelo Álvarez was largely at his best in this performance, although there were some moments when he seemed overwhelmed by the orchestra or found the part a little high. Yet he remains one of the most emotionally giving and honest performers, outstandingly lyrical in Ah s, ben mio and passionate in all the scenes; temperamentally, he suits the part down to the ground.

It was perhaps a more mixed story with Catherine Naglestad‘s Leonora. There were a few vocal problems in Part IV, mainly in terms of the music lying a bit too high for her, briefly causing her to sound exposed despite a naturally sweet voice. But she had tremendous pathos in the role, looking beautiful and acting with absolute conviction during her death scene.

Raymond Aceto was a knock-out as Ferrando, his booming voice carrying through the House; Young Artist Kishani Jayasinghe was a confident and pretty Ines; and Haoyin Xue showed promise as Ruiz.

Three years ago, my first review for musicOMH was an excellent revival of Verdi’s Simon Boccanegra, and it seems appropriate that my last should be with this excellent revival of another opera by my favourite composer. Many thanks to all my readers, and particularly to my parents for their constant and unending love and support. Farewell to all.