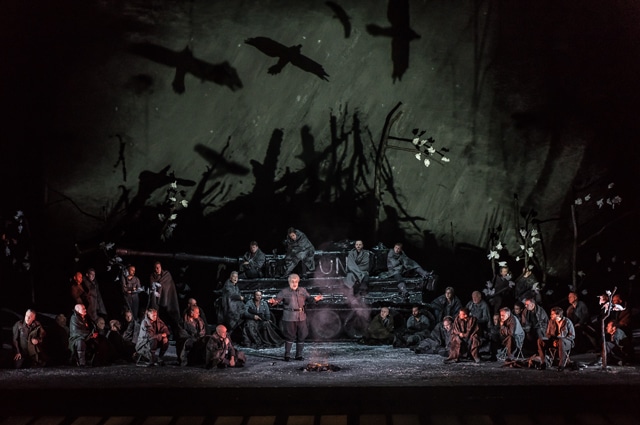 Given the imagery that it employs, it seems appropriate that David Bösch’s new production of Il trovatore should arrive on the centenary of the Battle of the Somme. In juxtaposing war-torn landscapes with butterflies and birds, it points to contemporary ceremonies designed to heal the scars of the past, and in the process brings another dimension to the opera. Because the work sees the fulfilling of a gypsy’s vow it is easy to see it simply as a revenge tale, but it is also a story of hope given the implication that Leonora and Manrico will be united in heaven. Certainly, Leonora wonders at one point if she is already there.

The drama is set broadly in the modern day, although it crosses eras as Azucena’s caravan could come from the 1950s while the Count di Luna’s troops take a selfie of themselves with a prisoner. The setting is a war-torn landscape, but amidst the stumps of burnt out trees huge blossoms are growing. This highlights both sides to the story, and it is interesting how our eyes are drawn to the element that supports the scene in question. When Ferrando sings ‘Abbietta zingara’ we notice the wasteland, but when Leonora sings ‘Tacea la notte placida’ we see the flowers.

This is not a production where arias are accompanied by a vast number of visual distractions, which is good because they can speak for themselves. However, a pleasing sense of movement is introduced to each by having a large screen at the back feature monochrome images, courtesy of Patrick Bannwart, that complement the action. These almost look as if they have been created in charcoal and when Ferrando sings ‘Abbietta zingara’ large abstract patterns appear to come towards us, perhaps signalling the impending attacks or the disaster that is about to unfold. When Leonora sings of how Manrico moves her with his song and lute playing, however, musical notes cross the screen and finally come together to form a heart.

In between scenes, a screen drops that typically reveals a butterfly landing on barbed wire, thus highlighting nature’s indifference to society’s tendency to tear itself to pieces, and its ability to renew itself. At other times the stage contains graves but no blossom (in other words, no redeeming features) and there is the subtle, but still shocking, image of Luna tearing up a cruciform grave marker. All this ties in with Leonora’s assertion that she can find ‘no smile, no hope, no flower’ in this world. 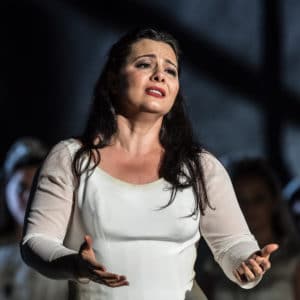 The scene in which both Luna’s forces and the gypsies attempt to ‘rescue’ Leonora from the convent sees a camouflaged tank pitted against the gypsies’ wrecked car, now converted into a cart. It creates a striking image and if it feels a little far-fetched to think that the troops might have driven a tank into the convent, this is countered by the fact that the nunnery is never presented as a physical structure. Elsewhere there are telling details that highlight Azucena’s obsession with what happened all those years ago. Toy babies hang from her caravan, looking almost like ex-voto offerings, and she cradles one of these for most of ‘Stride la vampa’.

The soloists are outstanding from the start as Maurizio Muraro brings his excellent bass to the fore as Ferrando provides the backstory. As Leonora, Lianna Haroutounian reveals the most sumptuous yet sensitive soprano in ‘Di tale amor’ and imbues her pleasingly elegant movement with just the right level of charge. Francesco Meli impresses with his expansive tenor that in terms of power and tone sometimes feels close to being perfect. Željko Lučić demonstrates a similarly high level of performance as he plays the Count di Luna, while the depth in Ekaterina Semenchuk’s mezzo-soprano brings immense gravitas to her portrayal of Azucena.

Not every idea works and the ‘Coro di zingari’, despite featuring anvils on stage and excellent singing, sees some tame direction that includes play fights and (it seems) a transgender wedding. Either the music with its sharp rhythms should be left to shine unimpeded, or it should be accompanied by more focused choreography than is provided here. Similarly, the effort to introduce visual interest to ‘Squilli, echeggi la tromba guerriera’ sees a prisoner being violently teased, but virtually the same ideas then seem to recur for the remainder of the evening. In addition, for some reason the final ten minutes do not build things up so effectively as to lead to the most shattering of climaxes, in spite of an arresting closing image that it would be a shame to give away. Nevertheless, when a generally successful staging combines with exceptional vocal performances and strong conducting from Gianandrea Noseda, remarkably making his Royal Opera debut, the results deserve to be seen.