The Importance of Being Earnest @ Barbican Theatre, London 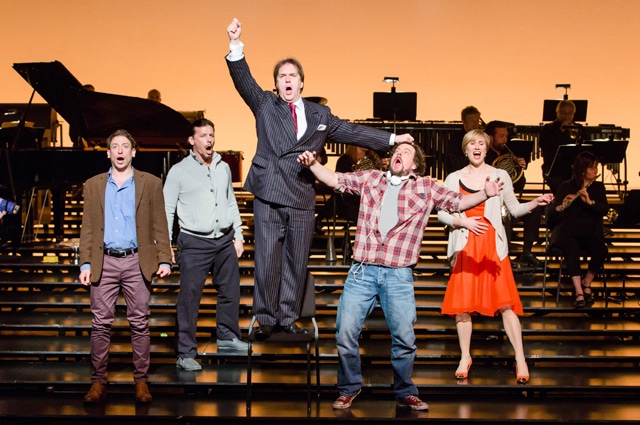 Ermanno Wolf-Ferrari’s little known Le donne curiose of 1903 may not seem the most obvious starting point for a discussion of Gerald Barry’s The Importance of Being Earnest of 2011, but there are parallels between the two works. Le donne curiose is based on John Goldoni’s eponymous play of 1753, which considers what happens when several women try to enter a men’s club in which they are forbidden to set foot. The play is a comedy and the opera rather whimsical, but the joke of the latter derives from the sense of monumentality that the music hands the protagonists’ rather trivial actions. In this way the simple act of entering the club (where it transpires that the men are doing nothing untoward) feels like a parody of other operas’ voyages of bravery or self-discovery such as the entering of the cave in Salieri’s La grotta di Trofonio, the journey through fire and water in Die Zauberflöte or the ascent of the spiral staircase in The Midsummer Marriage.

In the same way, Barry’s creation, which is presented at the Barbican by the Royal Opera having appeared at the Linbury Studio in 2013, attempts to bring a whole new sense of humour to the work. In comparison with Le donne curiose, however, it suffers from two disadvantages. First, although music is used with the intention of introducing something original to the piece, it lacks such a clear aim as (for example) bringing a sense of monumentality to the story. Second, in this instance the basic play is so brilliantly hilarious to start with that it is almost impossible to take the humour any further.

Nevertheless, if one stops drawing parallels with the original work and takes the opera on its own terms, it has not inconsiderable merit. In Ramin Gray’s production the stage consists of a series of tiered steps with the orchestra, conducted superbly by Tim Murray, adopting a diagonal formation as it occupies half of the performance area. The box-like set blocks off all stage entrances, so the characters simply sit in the front row of the stalls and step up to the plate when required. They even have to enter and exit through the auditorium during the interval like everyone else. 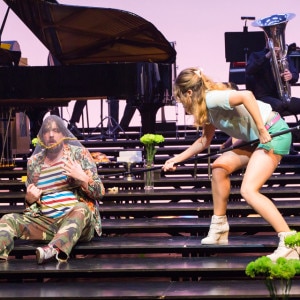 The music is highly innovative, utilising a quintet of strings, sinuous wind and discordant brass, and the range of effects that are produced is quite remarkable. Two French horns and a viola simulate a buzzing bee, following perhaps in the steps of Rimsky-Korsakov’s The Tale of Tsar Saltan, while the orchestra frequently mirrors what is happening in the plot. When Lady Bracknell utters her contempt for The French Revolution, it responds by playing a revolutionary theme similar to La Marseillaise, while tunes such as Auld Lang Syne appear sporadically. The score is clearly not an easy one to execute and the members of the Britten Sinfonia, who on occasions also chant words, respond exceptionally well to the challenge.

The opera is almost exactly the same length as the play which, when things generally take longer to say with music, means that in Barry’s libretto some of the original lines are rattled through at breakneck speed and others cut entirely. This once again introduces a ‘parallel humour’ to the original as instead of enjoying the witty exchange between Algernon and Worthing as the latter explains that his real name is Jack rather than Ernest, the interest is to be found in Algernon’s ‘monologue’ that reveals the same point, where his lines trip off the tongue. There are, however, times when the ‘abridged’ lines are simply not as funny or clever as the originals. Lady Bracknell’s declaration that to lose both parents ‘looks like carelessness’ may get a chuckle, but hardly the belter that might have been achieved had it been preceded by ‘To lose one parent may be regarded as a misfortune’.

Gwendolen and Cecily’s Act II encounter is played out by ‘proxy’ with the two singers facing the front and uttering their lines through megaphones, while a percussionist highlights the tensions between them by smashing plates on their behalf. His sense of rhythmic, not to mention comic, timing in doing so is perfect, but the scene lacks the humour and subtlety to be found in the original exchange, and suggests that some things simply do not transfer well to another medium. Elsewhere, the attempt to create a surreal experience feels too blatant as Jack and Lady Bracknell suddenly break into something akin to a Riverdance! The cast frequently stand or walk in choreographed formations, but these might have had greater resonance if they had been executed in a drawing room in Victorian costume, as opposed to on a minimalist set in modern clothes.

With many of the roles requiring notably wide ranges, the strength of the cast, which includes Paul Curievici as Jack Worthing, Benedict Nelson as Algernon Moncrieff, Stephanie Marshall as Gwendolen, Alan Ewing as Lady Bracknell (the character wears a suit and is not dressed as a dame), Claudia Boyle as Cecily and Hilary Summers as Miss Prism, is another of the evening’s definite positives. Overall, however, while there is some enjoyment to be gleaned from this interpretation, the lesson might be that there is greater scope to create an operatic comedy out of a piece that is rather less humorous to start with.

The performance on 2 April will be live-streamed on the Royal Opera House YouTube channel. For further details click here.

More on Gerald Barry
The Importance of Being Earnest @ Barbican Theatre, London