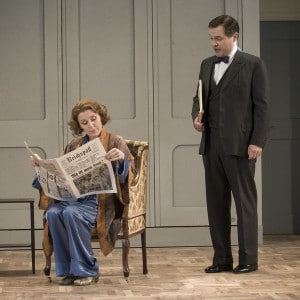 Richard Strauss’ “Bourgeois comedy with musical interludes” has never been a staple of the repertoire in the same way as most of his other operas, but Bruno Ravella’s beautiful production for Garsington Opera, with inspired musical direction from Jac van Steen, shows that it can be as engaging as any of the composer’s better known works. If you have ever been moved to tears by the Marschallin’s renunciation or Sophie and Octavian’s blissful avowal of love, then you’ll warm to the lyrical moments in Intermezzo, and, dare one say it, if you’ve ever been embarrassed by some of the lighter moments in Der Rosenkavalier, you’ll find the comedy in this work far more appealing.

Most of the opera is set in or around the Strauss family home in Garmisch, and the set design by Giles Cadle perfectly captures the bourgeois comfort of the house as well as suggesting its majestic surroundings – the view of the Zugspitze from the full length windows is just hinted at, with poetic use made of it at the close. The action moves swiftly, the transitions so expertly done that you are barely aware of them until you find yourself transported to the toboggan slope or the local inn. When the narrative shifts to Vienna, Robert’s anguished pacing around the Prater needs only a large street map and wispy shreds of fog to create the right atmosphere, and the game of Skat – well played, gentlemen! – is both sharply staged and crisply sung.

As the director has said, Christine is often regarded as “that horrid woman” but in fact she’s a fascinating character. Based on Strauss’ own wife, who had given up her career as a soprano, she is now compelled to be the great man’s partner, and it’s from this that her constant nagging arises. Having left the high drama of the stage behind, she feels the need to create dramatic situations in everyday life – which she does to an extent which seems excessive to others but is seen by her husband as the behaviour of someone “gentle, shy and tender… but rough on the outside.”

Mary Dunleavy came late to the production but she gives a fully rounded performance, capturing the vulnerability behind the waspish tongue, nowhere more so than when she is alone and misses the husband whom she had so recently sent away without a kiss. As a Strauss soprano she is more akin to Karita Mattila than to Lucia Popp (the Christine on the classic recording) – that is to say, with more ‘edge’ than sweetness to the tone, and she easily rides the orchestra even in its most tumultuous passages. Her diction is generally excellent – as is that of the cast as a whole – despite the occasional variation in accent.

Her husband is sung and portrayed superbly by Mark Stone, who bears some resemblance to a young Fischer-Dieskau and whose singing is similarly lyrical and sensitive to language. He conveys to perfection both Storch’s exasperation and his endurance, and he sings with full, ardent tone. Ailish Tynan shines as a completely credible Anna, their put-upon maid, and Sam Furness is a splendidly laconic Baron Lummer. Oliver Johnston, James Cleverton, Gerard Collett and Barnaby Rea provide memorable cameos as the card players and, in the case of Johnston’s Stroh, as the unwitting cause of the Storchs’ quarrel.

The relative importance of words and music – whether it is ‘Prima la musica, dopo le parole’ or vice versa, is naturally prominent in such a conversational work, but there was really no contest here, with such expansive, warmly phrased playing by the Garsington Opera Orchestra – at moments when the dialogue might stray into the mundane, Strauss’ glorious music swept you away, the sounds coming from the pit as gloriously rich as you might hear in any of the larger opera houses.

Strauss believed that “It is at the end that a composer can achieve his finest results” and Intermezzo has one of his greatest closing scenes: in a bittersweet reconciliation which may remind some of the closing moments of Arabella, husband and wife sing a rapturous duet in which all their petty quarrels are forgiven. Strauss and his wife lived into old age and died within months of each other, and the staging of the final scene makes touching reference to that: we won’t give it away, but suffice to say that it’s aided by Bruno Poet’s evocative lighting and that if you know and love the Four Last Songs, you’ll find it hard not to hear a certain line in your head as you stroll out into the night –