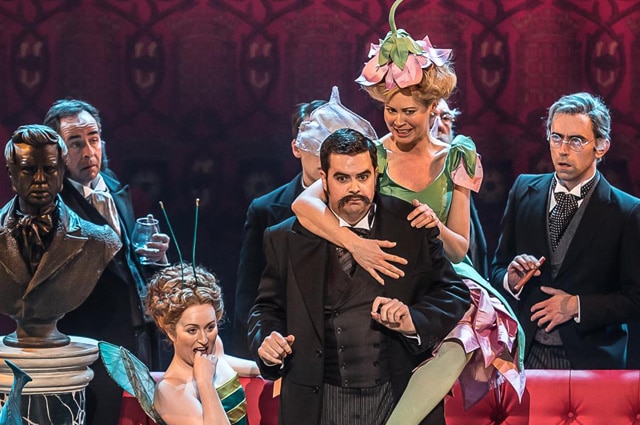 It is a deceptively difficult task for a major opera house to pull off Gilbert and Sullivan, because it is so easy for any production to fall either side of the tightrope it inevitably walks. On the one hand, these operettas require energy and so it is always a risk that top professionals, in their pursuit of excellence, will leave everything feeling just a little subdued. On the other, it can be all too easy to go for obvious laughs and pay insufficient attention to the works’ subtlety and dry wit. Given this difficulty, Cal McCrystal’s new production of Iolanthe for English National Opera does a decent job of balancing the competing demands to create something that is, by and large, both highly amusing and respectful of the original creation.

McCrystal, who was responsible for the hilarious National Theatre hit, One Man, Two Guvnors, has said that with a piece such as this due consideration must be paid to the original language because the humour lies within it. It is not a rule he follows to the letter, as, for example, he introduces a Page boy (Richard Leeming) who prompts a few extra lines and asides, but he does obey its spirit. He was also against any modern or futuristic setting because ‘you want to set the realism up so you can kick it around’.

This is the last piece that designer Paul Brown worked on before sadly dying last November, and the set stands as a great tribute to his talents. As the Royal Opera House learnt when it staged Chabrier’s L’étoile in 2016, it was just too large a place to carry off such a light-hearted work. Here, by placing a proscenium arch on the stage, the performance area is made to feel much more intimate, while its actual design also says much. It looks as if it could have been created by Pugin, who was responsible for the House of Lords, but it sees a model of three fairies in a more Art Nouveau style at its top. This awkward juxtaposition symbolises the clash between the worlds of the Fairies and the Peers, and also contains another joke. Might this arch have been created by a nineteenth century theatre designer who wanted to think he was like Pugin, but, not quite understanding the virtues of his style, thought he was perfecting the theatre with this addition?

The scenery is all lush flowers and foliage as it creates an exaggerated vision of an Arcadian paradise. However, when the Peers enter it is by tearing through the set’s paper backdrop with a steam locomotive. In this way, they comically highlight the clash between nature and society that is to be found just as much in Gilbert and Sullivan as in Ibsen or Wagner. 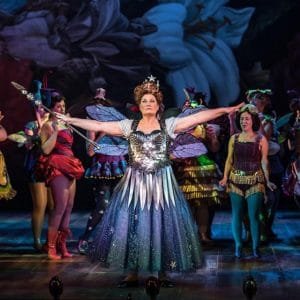 This Iolanthe, which is choreographed by Lizzie Gee who has also been responsible for the Union Theatre’s all-male Gilbert and Sullivan productions, really uses the English National Opera Chorus. Jonathan Miller’s 1987 production of The Mikado, which is still regularly revived, employed separate dancers for the big routines. Mike Leigh’s The Pirates of Penzance of 2015, on the other hand, entrusted the chorus with nothing daring at all, leading to a very prosaic ‘When the foeman bares his steel’. Here, the dancing is given to the chorus with some jokes being made about it as the Fairies stamp for a few bars of ‘Tripping hither, tripping thither’. The Peers toss bottles to each other while singing ‘Loudly let the trumpet bray’ while two of them are deliberately made to look like Jacob Rees-Mogg and Boris Johnson. One wonders just how many revivals it will take before the pair actually are!

At the start of each act Captain Shaw, Chief Officer of the Metropolitan Fire Brigade when the work premiered in 1882, addresses the audience, making jokes about just how awful the evening is going to be! It is fun for ENO to be able to send itself up in a way that it never could in Rodelinda or Satyagraha but, given these strong starts, it seems a shame not to see the character (played by Clive Mantle) developed more. True, he runs on a few times to extinguish the fires started whenever the Queen of the Fairies sends a bolt flying from her wand. He does not, however, even appear for ‘Oh, foolish fay’, the song in which he is directly addressed, although an image of him standing in front of a smouldering Coliseum is quite amusing.

Some songs, such as ‘If you go in you’re sure to win’, are delivered so slickly and comically that they have the audience absolutely howling with laughter. Other times, however, the humour feels misplaced as ‘None shall part us from each other’ makes too much of the joke of us actually seeing the stage hands carrying on the sheep that complete the Arcadian vision. For them to be ‘accidentally’ seen once would be amusing, but repeating the idea kills the humour and totally detracts from the beautiful duet. It is also questionable whether the audience sing-along in parts of ‘When I went to the Bar’ is really effective. The production does know that numbers such as ‘When you’re lying awake’ (The Nightmare Song) are so clever, and challenging to execute, that they require no superfluous distraction. However, when Sergeant Willis’ line that everyone ‘is either a little Liberal or else a little Conservative’ just begs for an update to cover Leavers and Remainers, it is a bit disappointing that the production does steer clear of more acerbic satire.

Timothy Henty conducts well, although the balance between singers and orchestra is not always at a premium. It is the old hands Andrew Shore (The Lord Chancellor) and Yvonne Howard (Queen of the Fairies) who fare best at projecting as they always ensure that the humour derives from the absurd (although not entirely unfamiliar) values to which their characters subscribe. Ben Johnson and Ben McAteer are luxury casting as the Earls of Tolloller and Mountararat respectively, while Samantha Price and Marcus Farnsworth provide hugely enjoyable portrayals of Iolanthe and Strephon. Barnaby Rea is a fine Sergeant Willis, and Ellie Laugharne stands out for the sweetness and shape that she brings to her sound as Phyllis.

This Iolanthe is a great crowd pleaser that should, and deserves to, enjoy a large number of revivals. With each, however, it would be advisable to cut several of the jokes that do not work, and to introduce some entirely new ones so that the audience always remains surprised. The production feels very fresh at the moment and it needs to stay that way.