Iolanthe, or The Peer and the Peri 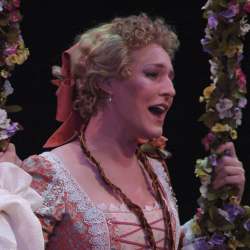 Nothing much has changed in the world of politics. That is one strikingpoint brought home by watching Gilbert and Sullivan’s Iolanthe.

We are not quite as accepting of fairies as subject matter these days, but thepolitical satire in Mr. Gilbert’s libretto will never go out of style aslong as there is ineptitude in government, laws that lack common sense, andself-serving, not-overly-bright politicians who follow their leaders inlock-step fashion. As in Gilbert and Sullivan’s day, there seem to be noshortage of these.

Iolanthe is a fairy who committed the crime of marrying a mortal. Afterbeing pardoned from her twenty-five year banishment by the Fairy Queen,Iolanthe reveals that she has a son, Strephon, who is half fairy (his upperhalf) and half mortal. Strephon is in love with Phyllis, a ward of the LordChancellor.

Complicating matters is the fact that most of the members of theHouse of Lords are also salivating after Phyllis. Further complicationoccurs when Strephon is seen embracing Iolanthe, who, being an immortalfairy, appears to be a girl of seventeen. Phyllis and the Peers refuse tobelieve that she is Strephon’s mother.

Iolanthe is not often produced in the United States, although it is hard tounderstand why. The operetta is fast-paced and funny with lots of surprisesalong the way. The delicious, audience-pleasing political satire woven intothe improbable story resonates with US audiences, as with those elsewhere.The spectacle of a government official declaring “…if there is aninstitution…which is not susceptible of any improvement at all, it is theHouse of Lords!” and “I’ve a great respect for brains I often wish I hadsome myself…,” brought hearty laughs from the Nashville audience, many ofwhom were probably mentally replacing “House of Lords” with “US Senate.”

Mr. Sullivan’s music is varied, occasionally lush, and beautifullyperformed by members of the Nashville Symphony under the direction ofMaestro William Boggs. As the Queen of the Fairies, Melissa Parks was notonly vocally adept but displayed comic timing worthy of a professionalcomedienne. As Iolanthe, Kirsten Gunlogson was a stand-out as well. Her pleato the Lord Chancellor for Strephon’s happiness was a touching interlude, arock of pure heartfelt emotion in a stream of silliness.

The rest of the cast ranged from adequate to admirable, although there weresome uneven parts during ensemble pieces and duets, especially early on. Thecompany seemed to gain its footing as the show progressed. The finale of ActOne, perhaps the most traditionally “operatic” part of the operetta, wasespecially effective.

Act One’s fairy forest setting and Iolanthe rising from a stream offeredopportunities for stunning visuals which unfortunately went unfulfilled bythe disappointing set. The forest – with an inexplicably enormous mushroom,pinecone, and spider web – was rendered in dull colors. Rather than astream, Iolanthe emerged from a cloud of dry-ice mist, an effective enoughentrance except for the distracting noise of the machines producing it.

Stage Director Roger Stephens tweaked the libretto a bit, adding somecontemporary lines. In many cases, this can be something to dread, but herethe changes were brief and got a hearty laugh from the surprised audience.Lines about another Presidential term for George Bush followed by HilaryClinton as “Queen” were out of place, yet hilarious. Improbably, the BBCalso came in for some ribbing. The Fairy Queen sings about it helping heravoid lusting for a handsome mortal: “Oh BBC, you keep my heart frombreaking. You put me to sleep …and keep my desire from waking.”