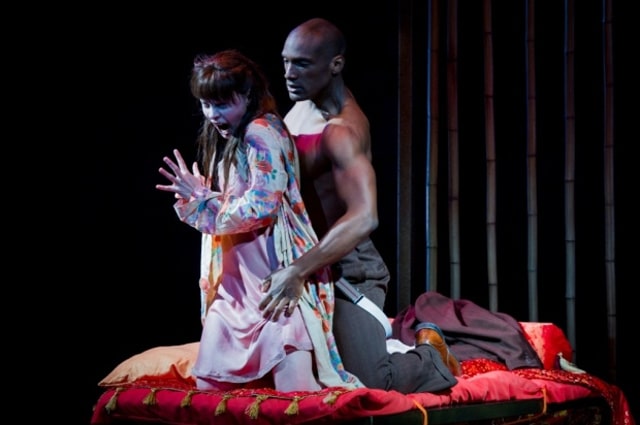 Mascagni is something of a speciality at Opera Holland Park, where productions of L’amico Fritz, Zanetto and Cavalleria rusticana have appeared in recent years. The rarely performed Iris, however, has a special place in the venue’s heart as it appeared in its second ever season in 1997 and proved so popular that it was immediately revived the following summer. This year, however, a new production directed by Olivia Fuchs has been introduced, and it proves to be an excellent opener to the 2016 season.

Like Madama Butterfly, which it actually predates by six years, Iris is set in Japan. While, however, Puccini’s opera explores what happens when the values of two different nations come into conflict, this work is grounded entirely in one culture, even if it only represents Mascagni’s perception of it. It concerns the young girl Iris who serves as her blind father, Il Cieco’s sight, and who awakes from dreams in which monsters flee from the rising sun.

Many men are taken with her beauty, but one Osaka becomes so infatuated that he takes things a step further. Enlisting the help of Kyoto, the owner of a house of ill repute, they stage a show in which a young geisha tragically dies and hears the voice of the Sun, played by Osaka. As the drama reaches its climax, Iris is abducted and taken to the red light district of Yoshiwara. When news reaches her father of this, he does not realise that she was kidnapped, and is inconsolable as he believes she went there of her own accord.

Iris awakes in Kyoto’s house, believing she may be dead and in paradise, and yet confused because she feels so unhappy. Osaka appears but when she proves so resistant to his advances even he appreciates that it would be wrong to persist, and suggests she is returned home. Seeing no profit in this, however, Kyoto parades her before a group of men at which point Osaka becomes so infatuated with her once more that he attempts to buy her. Then Il Cieco appears, venting such rage that Iris tries to kill herself in shame. 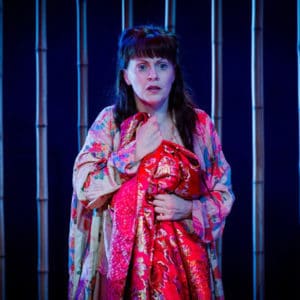 Needless to say this can be a hard hitting tragedy, although there is paradoxically one element of beauty as Iris dies and in the process virtually becomes one with the rising sun. Although on the surface not much may seem to happen in the plot, it is a thematically rich story that is very telling of human nature. Many fathers may see their daughters as their life, but Il Cieco has a particular reason for doing so because she is his guide and hence the means by which he can ‘see’. The father’s blindness also proves crucial to the plot in so many ways. When Iris disappears he promises to give his house and garden to whoever can find her because, it would seem, things he cannot see are useless to him.

Similarly, it may be his lack of sight that leads to his misinterpretation of events. Someone tells him that Iris has gone to the red light district, but we can speculate that he might have ascertained more about the surrounding circumstances had he been able to read the letter in which this is proclaimed for himself. One also senses that when he finally confronts her he would have realised what had really happened had he been able to see her distress, and not simply heard her voice.

Just before Iris dies, there is a powerful scene in which she questions the futility of her existence. This is played out by seeing the three principal men sing in turn, and in the process they reveal what Iris did for them and what they did not do in return. The weakest apologia perhaps comes from Osaka who clearly shows remorse, but states that because he is sad he will go elsewhere in order to smile again. Though he is not unaffected by Iris’ fate, it seems as if he escapes very lightly in being able to carry on living. Kyoto reveals that his own hard upbringing caused him to seek relief by pursuing ‘pleasure’, but such pleasure is at the expense of her life, while her father has ensured through his own actions that he will never see, and hence live, again.

Soutra Gilmour’s set design is simple but intelligent. Three cages dominate the stage, which can act as very literal props to show the incarceration of Iris and other women at the hands of Kyoto, and also emphasise the notion of entrapment more generally. At the beginning one represents Il Cieco’s house, showing how his blindness had led to him being imprisoned in his own world, while the fact that the men sing their final ‘monologues’ from the cages also suggests the psychological prisons that have come into play. Water lilies, tree stumps and red lanterns lie all around generating allusions to Japan, while red and blue light and the rays of a ‘Japanese’ sun stream down from above.

Mascagni’s score is very intriguing, with the Overture standing out by virtue of the ground that it covers. Beginning with sensitively rendered upper strings, underpinned by darker, richer lower strings and brass, it builds up to a no holds barred tour de force, complete with Japanese gongs and choral assault. It is conducted very finely by Stuart Stratford who leads the City of London Sinfonia, while the Opera Holland Park Chorus is also on excellent form.

Anne Sophie Duprels initially reveals a direct yet light soprano, as befitting Iris’ youthful, innocent character, but she then adopts a weightier, more vibrant, tone as by degree she sees, and responds to, the darker side of life. Noah Stewart as Osaka reveals a full tenor sound that retains its purity by being shaped so well, while the contributions of Mikhail Svetlov as Il Cieco, James Cleverton as Kyoto and Johane Ansell as a Geisha also help to make the evening the success that it is.