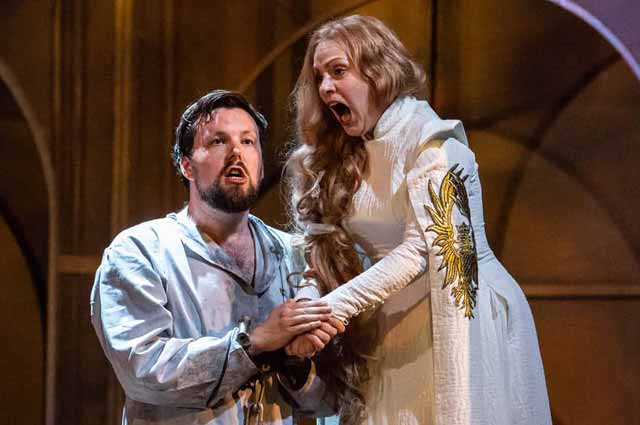 One of the delights of Opera Holland Park is the opportunities it presents to hear rarely performed works from Italian composers whose own considerable talents were eclipsed by those of their contemporary, or near contemporary, Puccini. Operas by Zandonai, Catalani, Wolf-Ferrari, Cilea, Montemezzi and Leoncavallo have graced its stage in recent years, but the one composer for whom the venue has a particular love is Mascagni. Now, following productions of L’amico Fritz (2011), Zanetto (2012), Cavalleria rusticana (2013) and Iris (2016), it is the turn of his 1911 work Isabeau, one of three operas on which he collaborated with librettist Luigi Illica.

The story is an adaptation of the medieval legend of Lady Godiva, and sees King Raimondo, being blinded by grief at the death of his sons and manipulated by his minister Cornelius, take a dictatorial approach to deciding his daughter Isabeau’s future. He plans for a tournament to determine her husband, but she insists on there being no fighting so that it becomes a battle of love rather than force.

When, however, the would-be suitors boast of their riches, valour and suffering, she declares that wealth, courage and pity are not love and rejects them all. The King is so furious that, at Cornelius’ suggestion, he orders her to ride naked through the town for all to see her shame. The people are horrified at the severity of this decree and demand the King pass an edict that all windows and doors be closed, and that anyone who spies her be blinded. However, Folco, the King’s new falconer, seeing virtue and beauty where everyone else sees sin and depravity, glimpses the Princess and is immediately arrested.

When Isabeau visits him in prison, she learns that his sighting of her was far from ignoble, and falls in love with him. However, before she is able to tell her father that she wishes to marry him, the angry community, egged on by Cornelius, closes in with disastrous consequences for both of the lovers.

Martin Lloyd-Evans’ version, which represents both a co-production with New York City Opera and the UK premiere of the work, sees the set by takis divided into three distinct parts. On the right is a cylindrical tower, which signifies the palace and has an outer wall that can be rotated to reveal its interior. In the centre is a large arch-like structure that could signify the city gates, but serves a variety of purposes over the evening. On the left are a set of brick buildings that represent the townspeople’s dwellings and possess plenty of windows that can be firmly shut for Isabeau’s ride. These buildings, however, are clustered into several standalone blocks that can be pushed around independently of each other to create different formations. For example, they are placed in front of the gallery for the tournament to create a podium from which the King and Isabeau can judge the affair. 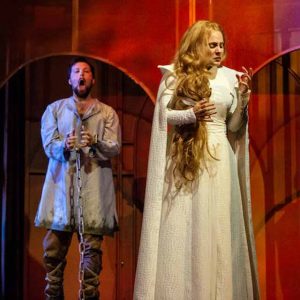 For the naked ride, which takes place during the Intermezzo, the buildings are pushed around to signify Isabeau passing through different streets. This also heightens the air of intrigue as we as the audience merely catch glimpses of the Princess (who sports a flesh coloured bodysuit) as she repeatedly disappears among the moving buildings. At the climax, when Folco glimpses her, the blocks are pushed together to form one long street so that she emerges around the end of it and into view.

The horse that carries her does not seem dissimilar to the puppets seen in War Horse, only the frame is silver and one of the puppeteers is actually inside it to create the creature’s front legs with his own. The story also features a falcon and this is beautifully created with three figures holding its left wing, body and right wing respectively. In this way, it appears to fly gracefully when the trio move close together, but also possesses a Surreal or spiritual air as the elements are separated out. The people who operate them are described as angels, though they are dressed more like monks, with each having a bloodied bandage across either their eyes, ears or mouth, possibly to represent Isabeau’s own vulnerabilities. Their movement brings much visual interest to the evening, while the way in which the Princess is seen to fall at the end is paradoxically dreadful in terms of what it results in, and yet deeply beautiful if judged solely on its visual appeal.

Mascagni’s score, which is conducted extremely well by Francesco Cilluffo, is a pleasing combination of Romantic harmonies and chromaticism, with trumpet fanfares signifying royal splendour and harp and woodwind a swooping hawk. It is brought out to the full by an excellent all-round cast, which includes George von Bergen as Cornelius and Fiona Kimm as Folco’s grandmother, and two particularly appealing leads.

Anne Sophie Duprels, a regular at Holland Park who starred in Leoncavallo’s Zazà last year, gives an immensely spiritual performance as Isabeau, with her soprano possessing such pleasing grains that her sound only feels more radiant and overwhelming the higher it goes. David Butt Philip, recently seen in the title role in Brett Dean’s Hamlet for Glyndebourne Touring Opera, reveals a brilliantly expansive tenor that is possessed of perfect levels of weight, power and darkness for the role. Their final scene together in the prison sees them both giving absolutely everything, and as a result it stands as something extremely special.

Opera Holland Park’s 2018 season continues until 28 July, and includes a free open day on 22 July. There will also be three nights of film screenings from Luna Cinema from 1 to 3 August. For further details of all events visit the Opera Holland Park website.