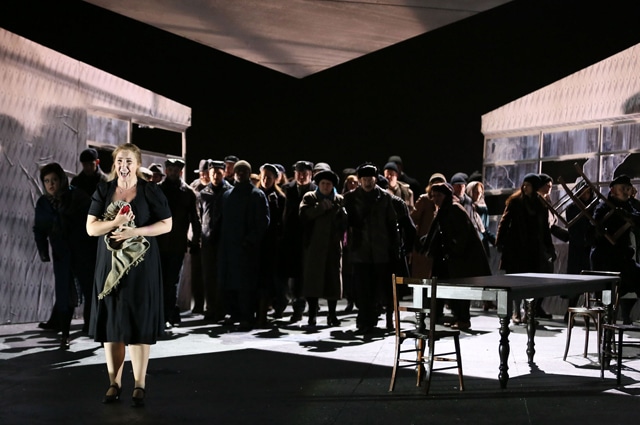 After a somewhat mixed season, the English National Opera is ending on a high with this blistering revival of David Alden’s 2006 production of Janáček’s Jenůfa. Inexplicably we’ve had to wait 6 years for either of the main London houses to present one of the Czech composer’s operas, but the wait has been worthwhile.

Alden’s staging relocates this story of infanticide to the late 60s, and in Charles Edwards’ stark and brutal designs it’s evident we’re somewhere in the former Eastern bloc. There’s no water mill, and all the original ‘folksy’ elements are expunged. Whilst some may miss these, Alden’s razor-sharp direction more than compensates, given the poleaxing performances he extracts from all the singers.

As we’ve come to expect from this maverick director, even the smaller roles are perfectly etched, but it’s the direction of the four protagonists that makes the most devastating impact. Returning from its last revival in 2009, Michaela Martens is in even more sovereign voice now as the Kostelnicka, and her proud, almost sympathetic portrayal, underpins how the terrible decision she makes which lies at the heart of the drama is one borne out of love for her foster-daughter, Jenůfa, rather than malice. 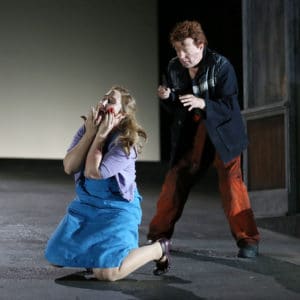 New to these shores, the young American soprano Laura Wilde is an exciting find. As Jenůfa she charts the character’s journey impeccably, and in the process unleashes a wonderfully lyrical voice to telling effect. As the two half-brothers vying for affection Nicky Spence is all testosterone and abandonment as Steva, whilst Peter Hoare captures the essence of Laca’s emotional turmoil to a fault, and sings with clarion tone. The closing duet between him and Jenůfa brings a tear to the eye, and could not fail to melt even the hardest of hearts.

But what holds all this together, is the incandescent conducting of Mark Wigglesworth and the playing of the ENO orchestra, aided and abetted by the full-throated contributions from the ever-excellent ENO Chorus. That this short run of performances is his last as the company’s musical director is nothing short of criminal. Having felt he had no option but to resign when faced with the hapless CEO Cressida Pollock’s plans to reduce the Chorus and performances next season, he’s now stepping down. His conducting is ideal, blending the febrile energy that the late Charles Mackerras brought to the Czech composer’s operas with a more unhurried, lyrical approach as favoured by the likes of Jiří Bělohlávek. The amount of detail he brought out in the orchestration was fascinating, and the orchestra played like lions for him.

Praise and awe was mixed with anger and regret, however. Anger, that the company’s new artistic director could go on the radio and say that he intends that “the obscures like Janáček”, will seldom feature in his future plans, when this company is steeped in a Janacek tradition that goes back to the first UK performances of Kat’a Kabanova under Mackerras. What was he thinking of? Some of the most memorable performances at the Coli have been of works written by this towering musical figure of the last century. Conductors such as Simon Rattle, Richard Armstrong and Paul Daniel have given exemplary performances over the years. His ill-informed mis-judged comments can hardly have been the ringing endorsement that might have set the box office alight.

And of course regret that he and Pollock are now in charge. Anyway, there are four performances left, so just go. Not only because you will be in for one of the most thrilling theatrical nights of your life, but because it may be your last chance to catch a Janáček opera at the Coliseum, and that is too sad to contemplate.