After decades, a welcome return of Jenůfa to Covent Garden. 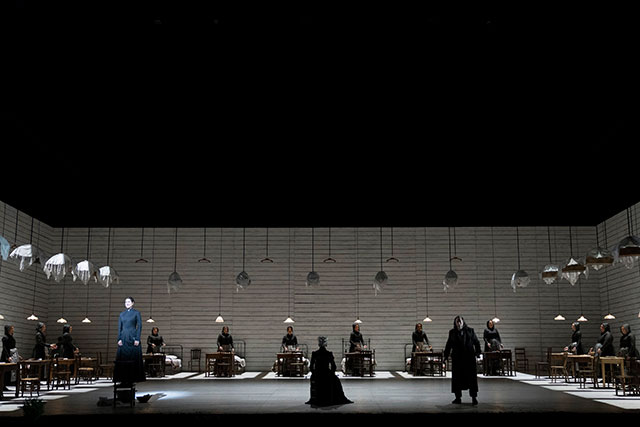 Expectations were running high for The Royal Opera’s latest addition to its cycle of Janáček operas – a new staging of Jenůfa by the distinguished German director, Claus Guth. Rehearsals were well underway last March when Covid struck and the project had to be abandoned, so it’s to The Royal Opera’s credit that they managed to slot a run of five performances back into the schedule so soon. We may have lost the original conductor, Števa, and Laca, but there was a collective sigh of relief that both Asmik Grigorian (Jenůfa) and Karita Mattila (Kostelnicka) were still slated to appear.

Mostly, those expectations were met. For a director renowned for his interventionist approach to many of the standard works in the operatic canon, his staging is surprisingly conventional, despite the addition of an extra layer of symbolism which fortunately never really gets in the way. Its greatest strength is the way in which Guth tells the story with unswerving honesty, each act having its own distinct look and feel. The only common denominator throughout is Michael Levine’s slatted box design – the back wall placed far upstage, so while this provides a large area in which the action can take place, it’s not very singer friendly, but more of that later.

Taking their cue from the repetitive xylophone motif that underpins the first act, Guth and Levine represent this visually as a metaphor for the humdrum existence of the inhabitants of this small Moravian village, as they go through the motions of daily life. In the second act, the Kostelnicka’s house is a prison composed of bed frames, the mattresses scattered randomly outside. A character dressed as a raven stalks the stage, while the ladies of the ROH Chorus, in black – looking like refugees in mourning from Gilead – react silently as the tragedy unfurls.

Act III is simpler – the stage strewn with flowers, the only props an assortment of tables and chairs. Whether coincidental or not, this final act was the most convincing of the evening.  Although Levine created a series of memorable stage tableaux, the downside to such a wide open space was voices got lost – the sound dissipating into the wings and the flies. These compelling designs were complemented by Gesine Völlm’s timeless costumes, and James Farncombe’s intricate lighting plot. 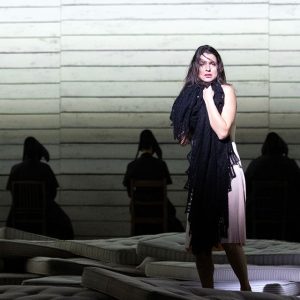 At its centre are Karita Mattila’s proud, imperious Kostelnicka, and Asmik Grigorian’s heartbreaking Jenůfa. Mattila is a born stage animal, so it was impossible not to be drawn inexorably into the character’s impossible dilemma. Living every bar as if her life depended on it, her transformation from the straight-backed guardian of the village’s morals in the first act, to the broken, haunted figure in the third was chartered meticulously and was painful to behold.

While her most recent predecessors in this role here have also made their mark dramatically (Eva Randová in the 1986 Lyubimov staging, and Anja Silja in the 1993 revival and new production by Tambosi in 2001), neither possessed the vocal opulence that Mattila still commands. The Finnish soprano never flinched from the demands Janáček’s angular, declamatory vocal lines made on her – overwhelming in her vision of death appearing at the climax to Act II, heart-rending when asking for her stepdaughter’s forgiveness. Hers was as completely rounded, musically assured assumption of the role as you’re ever likely to see or hear.

In the title role, Asmik Grigorian was never overshadowed by her more experienced colleague. Like Mattila, it’s impossible to take your eyes off her, and she lit up the stage whenever she appeared. Blessed with a glorious soprano instrument, suffused with colour, she was the Jenůfa of one’s dreams – her hymn to the Virgin Mary melted the heart. However, on a couple of occasions she was defeated by the wide open stage, and her voice failed to soar, but luckily they were few and far between. Her touching forgiveness of her stepmother, and singing of the closing, ambivalent duet with Laca – hope tinged with sadness, set the seal on an assured role and house debut.

As the two half brothers vying for her affections, Saimir Pirgu was an uncommonly forceful Števa – his tenor ringing out thrillingly. Nicky Spence, usually reliable and secure at the top of his range seemed strangely muted here, reticent even. Again, the vast expanses of the Covent Garden stage surely played their part in this, which was a shame as he certainly couldn’t be faulted for his vivid characterisation. Elena Zilio turned in an animated cameo as Grandmother Buryjovka, while the rest of the supporting cast was faultless.

Hungarian conductor Henrik Nánási led a propulsive account of this miraculous score, very much in the Mackerras tradition – spiky rhythms, pounding timpani, braying brass – and was rewarded with exceptional playing from the orchestra. There were the occasional issues with balance in the first act, but thereafter, stage and pit were in perfect harmony.

Absent from the Covent Garden stage for 20 years, it was good to see Janáček’s life-affirming masterpiece back in the repertoire and realised so well.

Performances continue until 12 October. More details can be found here.