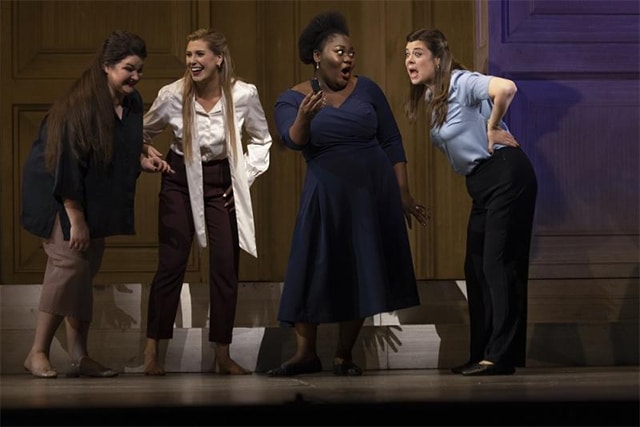 The Jette Parker Young Artists programme at the Royal Opera House is a key launching pad for an international career – not least because it helps young singers cut their teeth in comprimario roles from major operas on the main stage. The relative shuttering of opera houses over the last year has left such singers all the poorer in this respect – though plenty of them have cropped up in the ROH’s streamed and digital offerings. But their summer gala last Saturday left no doubt as to these singers’ hunger for opera, as well as their imagination and ambition. Props were scant – a clipboard, a mobile phone, some US flags, and modern dress – and scenes play out on Es Devlin’s set for Don Giovanni.

Covid scotched last year’s ROH Don Carlos, so it was nice to get at least a little bit of Verdi’s five-act drama of political intrigue and religious fervour in an excerpt from Act II that begins with Éboli’s song of royal seduction. The latter was sung with playful ease by Kseniia Nikolaieva, whose rich voice was offset by a teasing sense of fun in her movement, supported by Alexandra Lowe’s Thibault. Masabane Cecilia Rangwanasha immediately proved why she won the Cardiff Singer of the World song prize with outstanding, crisp diction, and was the tense, cool match for Andrés Presno’s ferociously passionate – though never coarse – Don Carlos.

Blaise Malaba prowled with quiet menace as Phillipe, though it may be a while before his voice is quite as cavernous as needs be. Nonetheless he acted well alongside an ardent and impetuous Rodrigue in the form of Gyula Nagy, whose monologue on the horrors of war in Flanders was spellbinding, pinging with the steely squillo of war. Malaba chilled to the bone in bringing him under his eerie spell.

More melodrama followed in the Act II duet between Gennaro and Orsini from Donizetti’s Lucrezia Borgia. This was handled with a light touch from both Stephanie Wake-Edwards and Filipe Manu. The former acted and sang with delightful swagger – rarely is drunkenness acted well – and the latter managed a convincing transformation from nervy ‘man on the run’ to relieved partygoer. Some smart direction saw Blaise Malaba gesture to his goons as the pair cheerfully trundled off, casting the lightest dramatic shadow.

The second half opened with the balcony scene from Charles Gounod’s Roméo et Juliette, showcasing the talents of Egor Zhuravskii and Alexandra Lowe. Lowe did stroppy and playful to a tee, the teasing match to both Zhuravskii’s lovelorn, ardent Romeo. Zhuravskii feels well at home in this repertory, and negotiated the challenges of singing in French ably, never turning nasal or diluting the colours available to him. His tenor his power but flexibility, showcasing much delicacy in the quiet upper reaches of Gounod’s more soulful moments. Lowe too has spryness on her side, was always zesty and effervescent, and never wanted for power.

All the artists came back together to send us out into the sunshine with the sparkling and fiendish ensemble that is Act II Scene II of Verdi’s Falstaff. There are inevitable ensemble problems with writing as ingeniously – perhaps impossibly – tangled as this, the two quartets of men and women batting lines back and forth. Filipe Manu’s Fenton again shone for his lyrical sensibility in his touching duet with Alexandra Lowe’s Nanetta; Masabane Cecilia Rangwanasha made for a sparkling Alice, with spry comic support from Kseniia Nikolaieva’s Quickly.

The Orchestra of the Royal Opera House provided an expectedly polished accompaniment, steered with assurance through the Verdi excerpts by Mark Elder, with Michael Papadopoulos and Richard Hetherington taking responsibility with Donizetti and Gounod respectively. Reduced orchestrations for each scene were provided by Pocket Productions, one advantage of which was the spotlight shining on these bright young voices. Falstaff bounced its way to an invigorating conclusion.