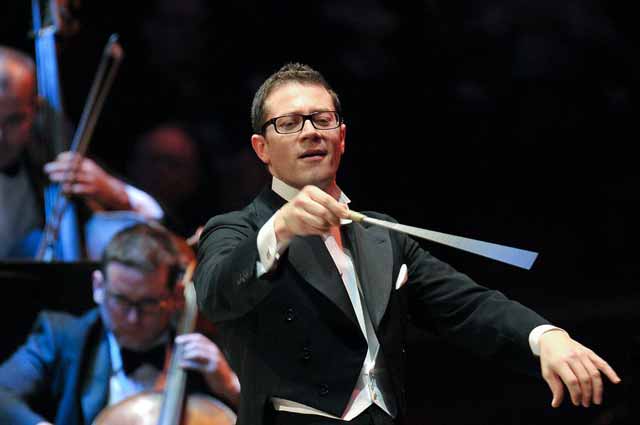 There’s nothing like a medley of music from the movies to get you into the Christmas spirit, and The John Wilson Orchestra (led by John Wilson) provided this in full measure on Saturday evening. A sense of tradition is also important for the season, and the numbers were perfectly judged on the nostalgia front – all from yesteryear, but ranging from Brown and Freed’s 1938 ‘Everybody Sing’ to John Williams’ 1982 music from E.T. As always, their accounts were excellent, and it’s an excellence that goes beyond simply playing some well-performed tunes. Wilson not only researches his editions, providing the most appropriate for the occasion (for example, in this performance, opting for Angela Morley’s stage-show  orchestration of the waltz from the Sherman Brothers’ The Slipper and the Rose), but he manages to get from the orchestra a feeling of period: the string-playing for the 1930s and 1940s numbers, for example (including Korngold’s The Sea Hawk, Waxman’s Suite from The Philadelphia Story, Rosza’s ‘The Prince and Princess’, Steiner’s suite from Now Voyager) had a metallic lushness to it that contrasted well with the more rounded timbre employed for the items from later decades.

The orchestra also worked from a full palette of timbres: The Sea Hawk was full of the brass, bravado and harp swooshes that one would expect from Erol Flynn swinging from the rigging, but deployed a musical Vaseline-on-lens quality for the love theme. The swooshing harps returned, along with soaring strings to deliver the technicolour exoticism of the opening to South Pacific. All this was set against more robust effects elsewhere: Styne and Robin’s ‘Diamonds Are A Girl’s Best Friend’ gave us some hefty trombone action; The Philadelphia Story contrasted wittily precise brass and percussion inserts against an atmospheric sax solo and some work for flute and harp that sounded almost like Debussy. Bluesy moments from a solo clarinet, trumpet and trombone pervaded Mancini’s ‘Le Jazz Hot’ (from Victor/Victoria), and Michael Lovatt’s smokily muted trumpet solo for the main theme of Johnny Mandel’s Burton-and-Taylor classic The Sandpiper provided the antithesis to the massive, swaying, glitzy finale to the Slipper and the Rose waltz. The most mercurial of the numbers was the extended ‘Girl-Hunt’ ballet from Schwartz and Dietz’s The Band Wagon which musically follows Astaire and Charisse’s bar-room drama, moving from a trumpet solo over a slinky quickstep through tense fight scenes, up-tempo swing, an oboe waltz to a climactic exploding glass, all in the space of minutes.

All this excellence, however, had its downside. The challenge with these massively scored orchestral soundtracks occurs when a singer is added to the mix. A musical-theatre voice usually sings against a much smaller, pit band – or, with larger forces in the studio, the engineers weave their magic balancing spells. Kim Criswell is a top-class performer, but setting her amplified voice against a stage-full of instruments resulted sometimes in disjointedness in the timbres. The amplification ensured she was never swamped, but there’s a difference between the volume produced from an amplified solo voice and the solid woof of a large ensemble.

Nevertheless, Criswell gave some excellent accounts, summoning a near-perfect Streisand nasal con belto for ‘People’ and ‘Don’t Rain On My Parade’ (from Funny Girl) – which doubled nicely for Ethel Merman for the second encore of ‘There’s No Business Like Show Business’. The polite English quality for Julie Andrews’ performances of ‘The Sound of Music’ and ‘Le Jazz Hot’ was near enough, and although ‘Softly As In A Morning Sunrise’ was given a rich vibrato, it probably needed more chest voice to duplicate Helen Traubel’s 1954 delivery.