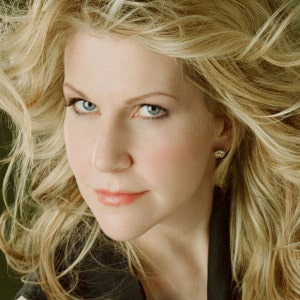 Joyce DiDonato, a Spotlight Artist in the Barbican’s 2014/15 season, is acclaimed as one of the great mezzo-sopranos in the world today, and this programme of bel canto arias showed her at her very best. The overarching theme was nineteenth century Naples, with all of the music coming from Italian composers (including Giovanni Pacini, Bellini, Michele Carafa, Rossini, Saverio Mercadante and Donizetti) whose operas then graced the city.

This concert, and a CD entitled Stella di Napoli, arose from a wider project to discover the range of music performed during this highly fruitful period in Naples’ history, and it has clearly uncovered some wondrous compositions. There can be many reasons why some operas emerge as classics and other equally good ones fade into obscurity, but on hearing many of these arias I was genuinely surprised as to why they do not grace the concert hall with the same frequency as ‘Oh mio babbino caro’.

The evening showed all the signs of being special before DiDonato even set foot on the stage. This is because the Orchestre de l’Opéra de Lyon, under the baton of Riccardo Minasi, opened the programme with an excellent performance of Rossini’s Overture to Elisabetta, regina d’Inghilterra. The music was originally written for Aureliano in Palmira and was later to be used as the Overture to Il barbiere di Siviglia. While it was clearly recognisable from its later incarnation, it was interesting to note the differences, which included the cellos and double basses playing lower in relation to the upper strings in some passages. In some ways the work seemed to have a lighter, dreamier quality to the Overture that we know, and yet parts were certainly possessed of more heft. The tempi were also pushed and pulled around to a far greater extent in places, and the orchestra skilfully managed all of the changes.

Over the evening the orchestra performed admirably, executing the Overture to Norma with the right blend of pomp and languor as befits its varying moods, and the Overture to Verdi’s Alzira with similar skill. Various soloists also shone during DiDonato’s arias, and even though the group is essentially a ‘catch-all’ orchestra, required to tackle Handel, Wagner, Puccini and Glass, one would genuinely have thought from its performance that it was a far more specialist ensemble in this area.

Across the seven arias that DiDonato performed in the main programme she combined superlative formal technique with such depth of expression that it constantly felt as if we were being offered the definitive versions of these arias. In the cabaletta ‘Ove t’aggiri, o barbaro’ from Giovanni Pacini’s Stella di Napoli, and in the final scene from his Saffo, DiDonato revealed the vast range of elements that go to make up her beautiful voice. Her technique focused the sound in such pure yet nuanced ways, and her vibrato, tremolo and trills were full-bodied enough to captivate the audience, yet so musically accurate that a sense of understatement was always maintained. Her rendition of ‘Par che mi dica ancora’ from Donizetti’s Elisabetta al castello di Kenilworth proved particularly impressive, with the utterance of the single word ‘Io’ seeming to capture a whole musical universe within it.

The arias generally, and perhaps unsurprisingly, focused on loss, sorrow and unrequited love. Within this, however, each demanded a different character with different feelings, and even though we were hearing them in isolation, one could tell through DiDonato’s performances how the person in each scenario was unique. Though, however, she proved an excellent actor, the pieces also benefitted from seeing just a little of herself in each of them, with the joy she showed as she listened to the various harp, flute, oboe and clarinet solos clearly being genuine.

Before DiDonato broke into her first encore someone left her a bunch of flowers with a tomato dangling from it, prompting her to thank the person by saying that she had missed her Missouri tomatoes this summer. It then became a prop after DiDonato dropped it during her stunning performance of ‘Tanti affetti in tal momento!’ from La donna del lago! She picked it up and handed it to Minasi, who tossed it in the air and caught it before bringing the orchestra off the final note!

In doing this DiDonato knew how to have fun without cheapening the experience or breaking the spell that had been cast over the Barbican Hall. Suffice to say, I emerged from the auditorium recalling the old saying ‘My favourite Brahms Symphony is the one I’m listening to at the time’. I was left thinking that my favourite bel canto aria is the one that Joyce DiDonato is singing at the time.

For all events in the Barbican’s Joyce DiDonato Artist Spotlight series click here.

Joyce DiDonato’s CD Stella di Napoli, featuring the music performed in this concert, is available on the Erato label.