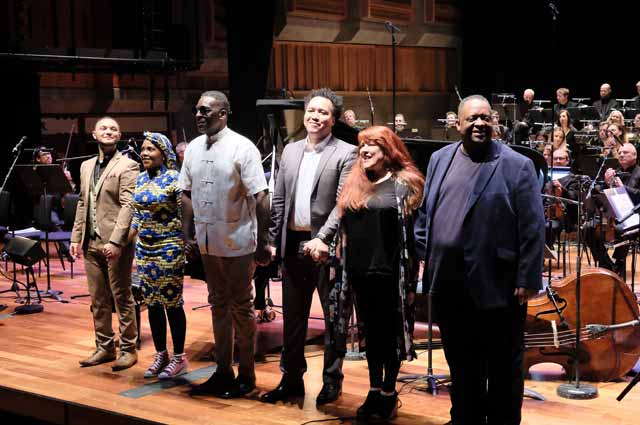 If someone were asked to think of a halfway house between opera and jazz, the chances are they would not arrive at oratorio. That is, however, the destination in the case of Julian Joseph’s new creation Tristan & Isolde. When the subject was first suggested to him, he instantly thought of the Wagner opera, even to the point of simply seeing the story as a German legend. As soon as he started thinking about it, however, he realised that it had a far older history, was actually set across Cornwall and Ireland, and had a universality that made it ripe for an updating. With the help of his long-term collaborator, the librettist Mike Phillips, he therefore composed a jazz oratorio that sets the story in the modern day.

The music is entirely new and does not spend half of the evening riffing on the famous ‘Tristan chord’. In terms of the story, it follows the spirit, although not the letter, of that employed by Wagner. Set in the present day, Tristan is a mafia enforcer of African descent while Isolde is of African-Transylvanian heritage. Tristan was sent to London by Marko to do a ‘job’ and got caught up in a fight with a group of Romanians who were chasing a young girl. In trying to protect her, he ended up stabbing Isolde’s fiancé Nicolae who died, while Tristan himself was injured. As Isolde ran away she discovered Tristan bleeding and, thinking he was also going to die, found herself cradling him rather than Nicolae and praying that he might live.

When she subsequently meets him in Transylvania, she recognises the wound that he received that night and becomes caught between her love for him and feeling that she must avenge Nicolae’s death. Meanwhile, Marko is Isolde’s uncle and the head of the family, while Vasile is Marko’s son and fears that his inheritance is unsafe as he sees his father increasingly favour Tristan.

The wider geographical area employed in this telling, with the action taking place across East and West Europe, provides a similar set-up to the original because today a flight from London to Bucharest takes a commensurate amount of time to a boat journey from Ireland to Cornwall centuries ago. Several plot points are quite different, however, even if many parallels are evident. Isolde begins by feeling imprisoned in her closeted life where she is treated like a princess, but this is still different to being physically imprisoned on a ship facing a forced marriage. Marko here is not a rival to Tristan for Isolde’s affections, although Vasile still attacks Tristan out of jealousy (over the favour that Marko shows him). At the end it is left to Tristan to sing over Isolde’s dead body rather than the other way around, although this is followed by an Epilogue that features all of the characters and hence feels more reminiscent of Don Giovanni than Tristan und Isolde.

An inevitable requirement when bringing a story into the modern day is to make it feel realistic, and here Tristan and Isolde poses a problem. Potions as a means of bringing the lovers together have to be ruled out as too fantastical, and yet without one there is something unbelievable in a young woman falling in love with the person who killed her fiancé. Here, Tristan appeals to the idea of love being stronger than anything else, which makes for a romantic story, but it might have felt more realistic if he had laid greater emphasis on his killing of Nicolae arising out of him actually trying to protect an innocent. Nevertheless, even West Side Story places the idea that ‘When love comes so strong / There is no right or wrong / Your love is your love’ above any more ‘rational’ arguments.

The oratorio started a little slowly, but soon built up momentum so that by the second act (there are only two in this version) it really felt as if the exploration of relationships was combining with the sheer joyousness of jazz to create a rich and profound experience. The orchestral forces comprised the BBC Concert Orchestra, which was conducted by Clark Rundell and featured several members of the Julian Joseph All-Star Big Band, and the Julian Joseph Trio, where Joseph himself was on piano. The second half saw more solos and improvisation emanating from the Trio, which aided the atmosphere, while another ‘coup’ was the inclusion of a chorus, provided by the BBC Singers, whose role was to emphasise certain phrases and hence ideas.

In the same way that paradoxically it can be operas with little action that suffer more from concert performances, because the staging proves such a key component in illuminating the characters and philosophy, sometimes in this oratorio it seemed as if much was being thrown at us verbally without us gaining a real feel for the time and place. The situation was not helped by the fact that enunciation was not always at a premium, which sometimes broke our grasp of what was happening.

Musically, however, there was much to enjoy as the vocal solos really enabled the characters to put on a show as they espoused and explored a theme, in exactly the same way as an aria does. One particularly exciting solo was ‘My name is Marko’ in which the eponymous character, brilliantly sung by Renato Paris, enjoyed asserting his credentials as the head of the family.

In fact, the element that really made the evening was the standard of the soloists’ performances. As Isolde, Carleen Anderson demonstrated a staggering range that right at the top of it seemed to achieve something akin to a soprano singing falsetto. Ken Papenfus as Tristan revealed a smooth and fresh sound while Christine Tobin, playing both Isolde’s mother Iuliana and friend Brigid, demonstrated real broadness and power in her voice. Most intriguing of all perhaps was Cleveland Watkiss as Vasile, whose rich and nuanced sound then gave way to him uttering ‘cuckoo’ repeatedly (to suggest how Tristan was worming his way into the family), utilising such an amazing array of facets in his voice that it made us forget that cuckoos are far more Mahler than Wagner territory!

This performance of Julian Joseph’s Tristan and Isolde will be broadcast on BBC Radio 3 at 7.30pm on Tuesday, 9 October.