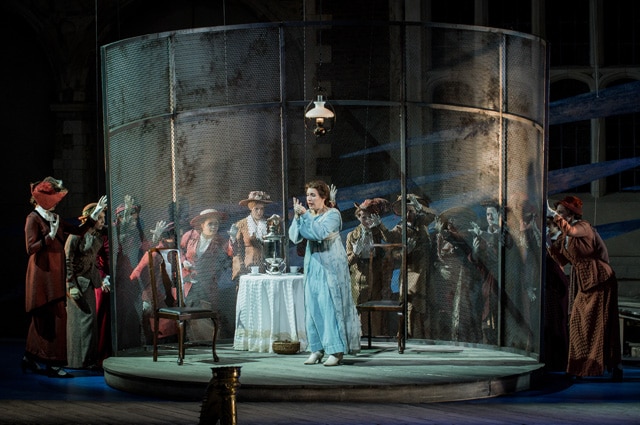 This revival of Olivia Fuchs’ 2009 production of Kát’a Kabanová for Opera Holland Park proves extremely effective as it makes good use of the space and the natural light that floods into it. The result is a staging that introduces just enough sense of exaggeration and stylisation to emphasise the repressive nature of the society, and yet also retains sufficient realism to make us feel for the protagonists as flesh and blood human beings.

Yannis Thavoris’ set seems fairly simple and yet is immensely effective. First and foremost it allows the venue’s notably broad stage to be used to the full, and does not obscure the ruins of Holland House, which form such a beautiful backdrop in their own right. The floor is blue, which could signify water, and gangways run across it. Characters spend the vast majority of time treading on the wooden walkways, revealing how societal expectations keep them on the straight and narrow. Similarly, when they occasionally depart from these and step into the ‘water’ it could represent their attempts to free themselves from society’s shackles.

The Kabanova house is a cylindrical cage-like structure that reveals Kát’a’s entrapment. In Act III this is replaced by a shrine-like area, complete with candles, in which Kát’a reveals the truth, possibly signifying the extent to which the church plays a part in encouraging confession. Hanging above the stage are a series of blue ‘lightning bolts’ that could represent water, the sky or even clouds, but in any case prove an excellent visual device which lends the set a certain Expressionistic feel. 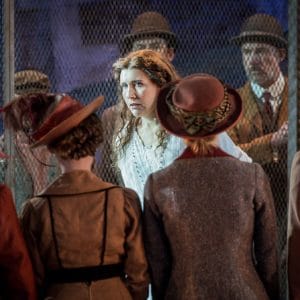 The chorus are important to the drama as they become the ‘eyes and ears’ of the community. During the Overture they completely surround Kát’a in the house, revealing just how little chance she has of escape. When she thinks about going through the locked gate they form a barrier as they adopt gestures that suggest they may turn a blind eye to her ‘promiscuity’ but will always be aware of it. Their actions are, in fact, very stylised, taking a step further the approach adopted by the principals. Among these, Dikój and Boris almost look like a comedy duo when they first appear with the nephew lighting a cigarette and the merchant knocking it out of his mouth. Similarly, when Kát’a pleads with Tichon not to leave he seems literally pinned against the wall, even though she is not physically near him. However, any such exaggeration emphasises the heightened emotions within the scenario, and it is never pursued to such an extent that we stop believing in the characters as real people. In fact, the encounters at the end of Act II between Kudrjaš and Varvara, and Boris and Kát’a, feel very believable as it really seems as if these two couples are in a state of bliss on an evening in which they can momentarily forget all of their fears and troubles.

Particularly good use is made of the space here as Kát’a and Boris sing from the back of the stage, with their sound rebounding off the wall behind them to excellent effect. Colin Grenfell’s lighting designs are appealing throughout, and he makes use of the outside light that floods into the venue so that this final scene of Act II feels bathed in a natural twilight glow that again enhances the sense of credibility. The opera is also timed to start at 8pm so that Acts I and II occur in sunlight, while Kát’a’s drowning in Act III, which is simply but effectively managed, takes place when it is dark.

Sian Edwards’ conducting is excellent, while all of the principals succeed in filling the large tented auditorium to good effect. From among the strong cast Julia Sporsén stands out in the title role, revealing a soprano whose fullness is matched by equally high levels of sensitivity and feeling. Peter Hoare is a convincing presence as Boris, with his striking tenor proving extremely engaging, while Nicky Spence is exceptionally strong both vocally and dramatically as Tichon. Paul Curievici and Clare Presland provide excellent support as Kudrjaš and Varvara respectively, Anne Mason is a class act as Kabanicha, while Mikhail Svetlov as Dikój provides one of the most convincing depictions of drunkenness that one is ever likely to see on an opera stage.

Opera Holland Park’s 2017 season runs until 29 July, with a week of film screenings following this. There is also a performance of Verdi’s Requiem on 1 August in aid of the Rugby Portobello Trust in order to help the community following the Grenfell Fire. For details of this and all events visit the Opera Holland Park website.