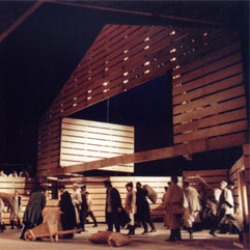 Shostakovich’s Katerina Izmaylova (composed in 1963) is usually described as the revised version of the composer’s Lady Macbeth of Mtsensk (completed in 1932).

However, perhaps it would be best to think of the two operas as two independent versions on the same theme.

After the Stalin-Pravda attack, Lady Macbeth of Mtsensk disappeared from the stage for decades. This important incident is usually suggested as the motivation behind the second version of the opera. Nevertheless, it is not impossible that the older Shostakovich revisited the theme for the same reasons as other creative artists also offer second opinions on their previous works. Indeed, when – on Sunday – a friend in the audience asked me about the difference between Lady Macbeth of Mtsensk and Katerina Izmaylova, I said: ‘Ask me after the Mariinsky’s performance of Lady Macbeth of Mtsensk at the Proms on 20 August’. But I should have replied: ‘What is the difference? 30 years of life experience between the two versions’.

Katerina Izmaylova, based on a short story by Nikolay Leskov, is no easy entertainment. The plot is heartbreakingly depressing. None of the main characters are happy or, indeed, particularly likeable. The end is grim, no hope is offered. Katerina is frustrated by her loveless marriage; her husband and father-in-law treat her as a chattel. Opportunist Sergei seduces Katerina, who falls for him so much that she goes on to murder her husband and father-in-law. When Sergei abandons Katerina and takes up with another woman, Katerina kills herself as well as the other woman.

From the lyrical and passionate music which he composes for her, it is evident that Shostakovich sympathises with Katerina. Unfortunately, Olga Sergeyeva, in the role of Katerina, failed to show the passion which eventually leads to Katerina’s down-fall. Though she is a competent singer with a good voice, Sergeyeva’s apparent lack of acting ability negated the essence of the plot. The rest of the cast did full justice to the music and story, but a performance of Katerina Izmaylova without a convincingly passionate Katerina becomes problematic.

Of the excellent cast special praise is due to Gennady Bezzubenkov for his really menacing and excellently sung portrayal of the father-in-law. Michael Petrenko, as the priest, treated us with brilliant singing (what a terrific bottom range this bass singer has!), credible acting and impressive dancing. In his short but important role of the Old Convict, Mikhail Kit sang beautifully. To hear three such fine basses as Bezzubenkov, Petrenko and Kit in one performance is an unusual treat.

Shostakovich took great care of his choral and orchestral textures. Neither chorus nor orchestra are only accompanying: they are vital parts of the whole. Under Gergiev’s microscopic direction, both the large canvas and all the important details were evident.

The stage production slightly disappointed. The chorus, so important in most Russian operas, were either standing motionless or just sitting (or, apparently, sleeping on the floor). Yet their words and vocal lines greatly contribute to the drama. Even when they attempted some physical action, like harassing Aksinya in the first act, they were too tame. There were some nice touches – such as Katerina’s undressing behind a red but transparent curtain, during what may be described as night music – but they were far and few between. The final moment, Katerina’s suicide and her murder of Sonyetka, was one of the clumsiest suicide/murder scenes I have ever seen. If I did not know the plot, I could have easily thought that two ladies were arguing while on a walk. Even their off-stage scream would have been ambiguous.

Fortunately, stage production will not get into the way of Shostakovich’s and Gergiev’s mastery when Mariinsky performs Lady Macbeth of Mtsensk at the Proms on 20 August.