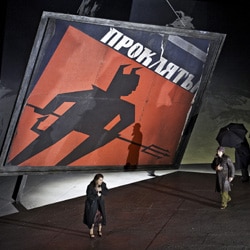 Strongly cast, persuasively directed, brilliantly designed and evocatively lit, this staging continues a long line of superlative Janacek productions at the Coliseum. Jancek’s operas have been well served by ENO (and formerly by Sadlers’ Wells) and this latest addition of Katya Kabanova more than upholds that tradition. Katya Kabanova was the first Janacek opera to be staged in the UK by Sadlers’ Wells in the 50s and since then the company has staged all his works, most notably in the ’70s conducted by Sir Charles Mackerras. In recent seasons new stagings of The Makropoulos Case (Christopher Alden) and Jenufa (David Alden) have not only offered new insights into the operas, but have proved to be some of the best work the company has done.

Expectations ran high for this new staging of Katya and by and large they were met, especially by the exemplary cast which contained no weak links, and even if David Alden’s staging didn’t pack as emotional a punch as his Jenufa, it was still dramatically miles ahead of some recent operatic forays by both London houses.

Charles Edwards sets are bare and brutal and both he and Alden use the width and depth of the Coliseum stage to their advantage. Adam Silverman’s lighting casts portentous shadows across this space which emphasises the pent-up straight-jacketed world into which Katya has been thrown, making the sense of claustrophobia palpable and within this Alden draws finely nuanced performances from the entire cast.

As Katya, Patricia Racette is nothing short of sensational. In the States she is rightly feted as one of the leading sopranos of her generation its a shame we’ve had to wait so long here in the UK to see her on stage but the wait has been worthwhile. She encompasses all the febrile qualities that the role requires, is a consummate actor and has a thrilling, open-toned voice that, allied to faultless diction, puts her firmly and squarely in the first division of sopranos. At this, the second performance in the run, she was rightly awarded an ovation at her curtain call. Luckily shell be singing her signature role of Cio-Cio San in Madama Butterfly with the Royal Opera next year an enticing and exciting prospect.

The supporting cast that ENO has assembled is certainly one of the strongest of recent seasons. Stuart Skelton was an ardent Boris, John Graham-Hall a weak vacillating Tichon, whilst Susan Bickley stayed just on the right side of caricature as his domineering, manipulative mother, Kabanicha. Alfie Boe was a compelling Vanya whist Anna Grevelius was a winning Varvara both characters, thanks to Alden, were far more vivid than in other productions Ive seen. Clive Bayley was suitably egregious as Dikoy.

Conductor Mark Wigglesworth led a perfectly-paced account of the work, was always helpful to his singers and secured some thrilling playing from the orchestra. Thankfully the work was given without intervals, allowing the drama to come across with all its force. Another red letter day for the English National Opera and proof, if proof were needed, that Jancek is one of the greatest of all opera composers.