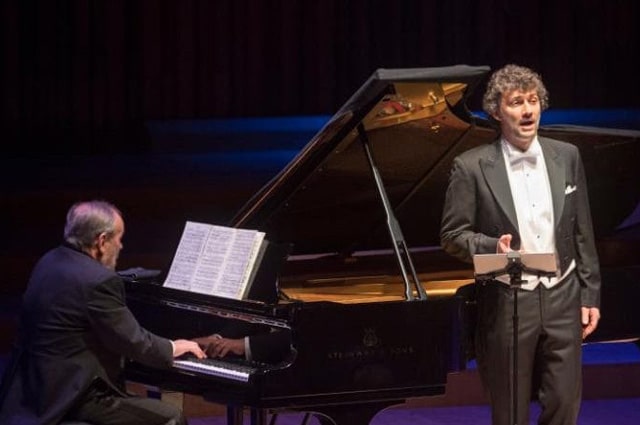 An evening of perfect harmony between singer and pianist, and a demonstration of the art of song which reminded us of what true greatness is in terms of textual understanding, emotional connection to words and music, glorious vocal colour and nuanced phrasing. It was Jonas Kaufmann’s first London recital after his enforced absence from singing, and he began a little hesitantly, with the first of Schumann’s Kerner Lieder feeling somewhat tentative, but Helmut Deutsch’s wonderful playing of the song’s nachspiel seemed to reassure the singer that all would be well, and so it was.

Schumann’s Liederreihe (song sequence) is more usually performed by a baritone, but this kind of unexpected choice is typical of Kaufmann (wait for his Four Last Songs on the 13th!) and he made a convincing case for it. ‘Stirb, Lieb’ und Freud!’ is an exacting song, with its combination of rapturous abandonment and restrained despair: Kaufmann’s singing of both the girl’s plea and the lover’s vow was heart-rending, the line ‘Es ist die Herzallerliebste mein’ devoid of undue sentimentality yet all the more gripping thereby. ‘Erstes Grün’ showed a different aspect of Schumann’s treatment of sorrow, the cruelly tripping accompaniment played here with restrained mastery and the longing for what John Clare called “scenes where man hath never trod” evoked with poetic fervour.

In ‘Stille Liebe’ we heard an example of what that pesky term Innigkeit really means: Kaufmann’s singing was so intimate, Deutsch’s playing so delicate, that even in this vast auditorium you could almost feel a couple of thousand people straining to be part of the emotions expressed ‘In des Busens Heiligtum.’ That intimacy was once more shown in the final song of the sequence, ‘Alte Laute,’ in a sublime performance of a song which has attracted the very best interpreters of Schumann, and this was singing to surpass them all. Partnered with the insistent questioning throb of the piano, lines such as ‘Und aus dem Traum, dem bangen, / Weckt mich ein Engel nur’ (and from the dreadful dream / only an angel will wake me) were a demonstration of how the mesmerising quality of a voice, even in so simple a song, can engage us in complex and troubling emotions.

Duparc’s Mélodies was another unusual choice, and again Kaufmann brushed aside any reservations one might have had. The Baudelaire settings and ‘Phidylé’ were perhaps the finest performances; ‘L’invitation au voyage’ avoided indulgent luxuriating in the lush lines, yet the phrase ‘Luxe, calme, et volupté’ must surely have had many in the audience swooning. For the rest of us, the joy was in the perfect French diction (although we French speakers are capable of swooning at the sound of a perfectly enunciated ‘u’) and the characteristically mellifluous phrasing. That phrasing was again a delight in the final song, ‘La vie antérieure’ where Kaufmann showed his ability to let rip with full majesty and then almost at once, shade down to quiet diminuendo.

Britten’s Seven Sonnets of Michelangelo provided yet another example of musical partnership – Deutsch’s playing in ‘Rendete a gli occhimiei’ was ideally collaborative, and Kaufmann’s singing of these intense words and fervent lines showed him to be amongst the finest of Britten interpreters. ‘Veggio co’bei vostri ocche un dolce lume’ requires not only an impressive top note but a flawless legato line and the ability to scale down the voice to a delicate, ephemeral thread, all of which were triumphantly on display here. ‘Spirto ben nato’ concluded the recital proper with glorious singing of this solemn, eloquent song.

Kaufmann and Deutsch were in lighter mood for the single encore, a rousing version of Strauss’ ‘Nichts.’ No singer could be criticised for just one encore after so taxing a programme, but it was quite surprising that the audience – ‘coughing like hags’ in the breaks yet so quiet during the actual singing that a friend visiting from the US said that the atmosphere was akin to being in church – did not demand more. That same friend remarked that in the US, there would have been a standing ovation at the end of such a performance – some of us certainly felt like giving one.