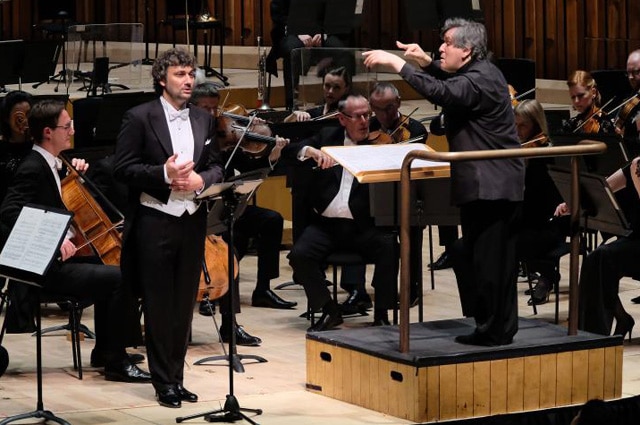 Jonas Kaufmann’s current residency at the Barbican began last Saturday in spectacular fashion with a recital that included Britten’s Seven Sonnets of Michelangelo. If, strictly speaking, this concert fell just a notch below what was achieved on that occasion, it remained a worthy follow-up to such a strong opener, and one that possessed its own share of magic.

With the focus being on Wagner, the evening began with the Prelude to Tristan und Isolde with the London Symphony Orchestra, under the baton of Sir Antonio Pappano, providing a clean and balanced sound, which positively radiated with beauty; the version played was one produced by Wagner himself for concert performances. Thus, while the orchestra did not actually perform the Prelude und Liebestod, this version of the Prelude included elements of the Liebestod at its end, and proved highly suited to an orchestra that was producing such a pure sound. Although the Liebestod is about transfiguration, it inevitably carries baggage with it as the associated deaths come to mind. A version of the Prelude that carries notions of a chord resolution at the end is not weighed down in the same way, and thus can rise to ethereal heights of its own accord.

Wagner originally wrote the Wesendonck Lieder for a female voice, but Kaufmann is not the first tenor to have tackled them, and his performance was marked out by exquisite tone. Even individual syllables in Träume became noteworthy for lying so well in the voice, and phrases such as ‘Glorie der düstren Welt’ in Schmerzen drew us in as depth of sound combined with excellent phrasing. There did, however, seem to be an element of hesitancy about his performance that manifested itself most in the first two songs as he took a little time to get into stride. Even here, however, there was some beautiful singing that was just occasionally undermined by the odd note or phrase that felt a little strained. For example, in the final three lines of Stehe still! the first and third of these felt tonally pure while the middle one, ‘Erkennt der Mensch des Ew’gen Spur’, seemed just a little less polished. From Im Treibhaus onwards, however, he was superb, embracing the chromatic world associated with Tristan und Isolde in both the third song and Träume and, through his relatively quiet sound, drawing us deep into the emotions.

Overall, Kaufmann was extremely strong when he could focus on creating the most hushed sound imaginable, or when he could whole-heartedly assert his voice, which smoothed out any difficulties that might otherwise have arisen through hesitancy. He was slightly weaker, however, when he was unable to place his voice within one of the two ‘extremes’. Kaufmann never really seemed to relax at any time during the songs, although that in itself was not a problem. It is not only that the music requires extreme concentration if its technical requirements are to be met, but thematically the songs are so intense that to make the sound feel too free would be to undermine their nature and power. The impression needs to be created that every thought is being contemplated in minute detail, and Kaufmann succeeded in generating this.

The second half of the concert saw Kaufmann joined by Karita Mattila and Eric Halfvarson to perform Act I of Die Walküre. The London Symphony Orchestra revealed brilliant playing that was possessed of wonderful purity and balance. The main criticism was that this act witnesses a clash between nature and society, with Siegmund being caught between his own desire and his mission as intended by Wotan, and as a result the playing should not always feel entirely smooth. There was no problem in the opening because the contrast between the two main themes is so obvious that the orchestra has to do nothing to bring them out other than ensure excellent balance. Elsewhere, however, certain upward thrusting phrases needed to sound less sumptuous and more jagged to highlight the tension. Nevertheless, no-one could have doubted that the orchestral playing was exquisite, and the solos of the cello and various wind instruments were particularly sublime.

Although, as a rule, Kaufmann seemed more suited to tackling the opera than the songs, once again his performance as Siegmund possessed some wondrous moments and just a few weaker ones. There did seem to be moments of hesitancy and he did not seem to embody the role as strongly as he might, even allowing for the fact that this was a concert performance. On the other hand, his cry of ‘Wälse’ revealed passion and perfect tone in equal measure, and the effectiveness of ‘Winterstürme wichen dem Wonnemond’ only grew and grew as he powered through the rising phrases. Nor did all of his quieter moments indicate hesitancy as they proved successful at drawing us in so that we truly felt the intimacy of the occasion.

Mattila was ultimately stronger at embracing the role of Sieglinde. She was, in fact, so successful at doing so that the sole problem was that every time she turned a page (and she was hardly glued to her score) it broke the magic because what she had created with her arm movements had been so engaging. Her masterly performance saw her bring a richer, more sumptuous sound to the part than many might ideally seek in a Sieglinde, but there was no doubting the class of, or commitment to, the performance. Halfvarson probably has more experience of playing Hunding than either of the other two have their respective roles, and his understanding of the part showed from the moment he set foot on the stage. He revealed a dark yet immensely full bass voice, and his acting was convincing as he never fell into the trap of indulging in histrionics.

By and large the individual elements that made up this concert performance were extremely strong. Although the few weaknesses there were in them sometimes combined to undermine the overall impression that was created, when every aspect was perfect, as was certainly the case in the final ten minutes, the results had to be heard to be believed.

Jonas Kaufmann’s current residency at the Barbican concludes on 13 February in a concert that includes Richard Strauss’ Four Last Songs.

More Wagner can be heard on 12 February when Opera North’s semi-staging of Das Rheingold is being broadcast on BBC 4. It will be available on BBC iPlayer for 30 days after this date and the company’s performances of the other three operas in Der Ring des Nibelungen will also appear online.