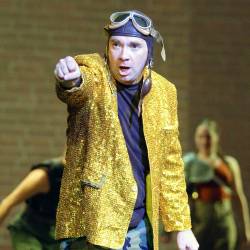 Is it coincidence that ENO’s first-ever production of King Arthur, a joyous (if heavily rose-tinted) celebration of Britain, opens during the World Cup? Director and choreographer Mark Morris underlined the point by jauntily waving an England flag during the curtain calls…

Oh well. Much as I might sigh for a football-free zone at the opera – of all places – it’s fitting that a masque originally planned to celebrate King Charles II’s silver jubilee in 1691, and which would have been crammed full of topical references, reflects the times.

Not that most of this production is modern, exactly, despite assorted jeans, camouflage uniforms, sweatshirts (King Arthur’s has ‘KA’ on the back) and microskirts. Post-modern perhaps, with a Director’s note in the programme informing us that the scene is a stage, the time is now.

Dryden’s verses – ranging from the comic to the sublime – become exquisite in the sure hand of the master at setting the English language to music. And though very few have anything really to do with King Arthur, they do provide an endlessly entertaining view of life as we wish it was lived in Britannia.

The singing and playing is difficult to fault. Jane Glover, Music Director of Chicago’s Music For the baroque, returns to the Coliseum and renews her collaboration with Mark Morris that has included ENO productions of Purcell’s Dido & Aeneas and Handel’s L’Allegro, il Penseroso ed il Moderato.

She has more than just the ever-reliable ENO orchestra in the pit as the chorus is ranged behind the instruments, to leave room on stage for the Mark Morris Dance group. The balance harmony of sound achieved is a triumph.

Individual performers are also excellent, including three new to ENO. Counter-tenor Iestyn Davies delights with his smooth, expressive tone; bass-baritone Andrew Foster-Williams is outstanding both as actor and singer and James Gilchrist is also a force for the future, with a stong, rounded and secure tenor. Baritone William Berger is also terrific in numerous revolving roles.

Gillian Keith, Elizabeth Watts and Mhairi Lawson are the three sopranos, with Keith taking the singing honours in my book and Lawson doing a vivid Sue Barker interpretation as a perky Cupid. But there really isn’t a weak vocal performance to be found, and diction is also good throughout.

The 18 Mark Morris dancers fill the stage with colour and movement in a bewildering array of costumes, and delight with a complex maypole dance among many set pieces. There isn’t much in the way of classical ballet steps (and the one dancer wearing point shoes seemed not to know what to do with them – or even what she was doing on stage).

And that’s part of my problem with this production. I have no desire to go back to the static performance of such a work, with prinicipals coming on stage, singing their arias and going off again. But the other end of the spectrum – where everything is unrelentingly super-busy and there are so many different ideas that they fight for attention – can be wearing.

There are a handful of production coups. Plain and mirrored doors are used to stunning effect in The Chase (Act II Scene I). Andrew Foster-Williams discovered in a deep freeze, while a 17th century mechanical snow machine is operated overhead, is delightful. The flesh-pink underwear-in-history collection for the seduction songs is great fun.

Overall, though, this is hardly a cohesive production. Would it have been any different if Mark Morris had not chosen to remove all spoken text? Possibly, though it might not have added to the enjoyment of the evening.

Because flawed as this production is, it’s an exhilarating roller-coaster of a ride. It will help if you don’t come expecting an opera: think of it as a pageant and when it all gets too much, close your eyes and let the glorious Purcell melodies take over.