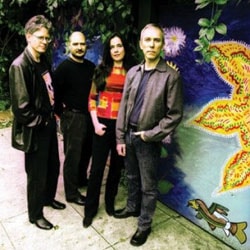 The Kronos Quartet are not your average string quartet, as becomes immediately obvious when they wander on stage in untucked t-shirts and shirts and leather jackets.

But when they are this successful in both the popular (they have played with Bjrk, David Bowie, and Nelly Furtado among others) and classical (they work closely with such acclaimed composers as Philip Glass and Arvo Prt) music worlds, they can really wear what they like.

For the first half of this evening – a double-header of UK premires – they are joined on stage by the pipa (a sort of Chinese equivalent to the lute) virtuoso Wu Man to perform Terry Riley’s A Cusp of Magic. For the first movement, leader David Harrington does not even pick up his violin, instead being responsible for keeping time in the complicated 108-beat cycle of this part with a bass drum and shaker. Nor are the string instruments used entirely traditionally; as well as a lot of pizzicato and an amazingly fast, screeching passage performed impeccably by John Sherba, there is even use of the backs of the bow and the violin neck as a percussion instrument.

But even this pales in comparison to the third movement. The Nursery uses a huge array of children’s toys to provide unusual sounds throughout the piece, with the influence of the more conventional string instruments diminishing until it finishes with an eerie atmosphere as only the toys can be heard. The fourth movement is then a striking contrast, being perhaps the most ‘normal’ part of the entire composition; it doesn’t last, and we soon have striking chords being played over an atmospheric and eerie recorded background of a doll singing a Russian folk melody. The final movement flits wonderfully between the dramatic and the melancholy, successfully rounding off an otherwise somewhat incoherent quartet.

This incoherence is not necessarily a weakness, and certainly not a surprise, given the multitude of inspirations and dedications that went into this. But it contrasts with tonight’s second premire: ‘…songs are sung’, by Henryk Grecki. The title comes from a four-line poem about death; the composer is most famous for his Symphony of Sorrowful Songs; and at one point the marking Morbido is used. Hands-up anyone expecting something up-beat and cheerful? The staging for this piece has changed from The Cusp of Magic; the quartet sit in the same positions, but gone are the toys, the percussion, and the dramatic coloured lighting. This is a much more slow and sombre performance, even after the melancholy that pervades several movements of the previous piece.

It is reminiscent of the soundtrack to The Hours, by Philip Glass; another composer who has worked closely with the Kronos. And parts of it do sound perfect for a film score. A period in the first movement builds a sense of urgency perfectly for a chase scene, and the wailing violins of the beautiful fourth movement, over the deep chords of the viol and ‘cello, would be suitable for a romantic break-up with a lot of tears (any film scored with this would have to be full of tears).

In between those two is the only fast movement, the third, a jerky stop-start performance which varies so suddenly in tone that it is sometimes difficult to believe they are playing the same instruments. This movement particular evokes a central theme of the composition, memory and its associated difficulties, with each short passage feeling like the beginning of recall followed by an abrupt end. An end very different to that of the piece as a whole, with the final movement being the most bleak of the entire composition, slow and lingering. But followed by rapturous applause.