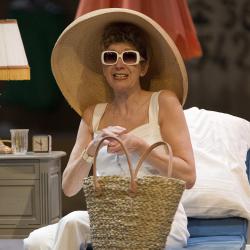 It’s a long time since I’ve been helpless with laughter at an opera house. I blame the sheep.

Actually it happened more than once – and for all the right reasons – which speaks volumes for the energy and sheer joyful absurdity of the London premire of the Thtre du Chtelet production of La Belle Hlne.

As befits Offenbach’s 1864 opera-bouffe, which combined topical satire, parodies of current musical styles and downright chaos, this is a Belle Hlne for our time.

It comes complete with Greek builders finishing off the holiday resort, airline flight crew shimmying up their tight skirts to do homage to the can-can, a stupendously well-choreographed swimming demonstration at the opening of Act 3 and a spanking new translation by Kit Hesketh-Harvey. The language may be clunky at times, fighting the musical phrasing designed for French, but at others it brings the house down (Charlotte Church, however, is advised to avoid the show for fear of offence).

The story, should you be wondering, is that of Helen of Troy and her abduction by Paris, following the famous judgment in which he made such a hit with Aphrodite that she promised him the love of the most beautiful woman in the world. Helen, having long regretted her choice of husband (Menelaus spends the first act snoring in bed, oblivious to her charms), is far from averse to the bright and ardent Paris. (I suspect most of the audience would have happily gone off with this Paris, of which more anon).

Other characters, familiar to all scholars of Greek history, include a feisty Agamemnon, a juvenile delinquent Orestes, two Ajaxes, helpfully designated I and II and decked out in cleaning materials, and a gloomy Achilles (the heel puns grow ever more excruciating as the evening progresses). Well I did say it was absurd… this is surrealism with a strong whiff of Monty Python, and none the worse for that. And I haven’t even got to the sheep yet.

Director Laurent Pelly (who also designed the costumes) makes his debut at ENO with this production, and has brought most of his regular collaborators with him – notably Laura Scozzi (choreography), Chantal Thomas (set designer) and Joel Adam (lighting). Anyone who can get the English to let them selves go so thoroughly, to transform themselves so completely into silly asses, gets my vote. And that really is the key to the enjoyment of this production: it is so totally, outrageously silly that you can’t help but be transported.

OK, there are times when the chaos becomes muddled, the director having thrown a huge bucketful of ideas at the production as if to see which ones will stick. The only cohesive element is the Empire-style bedroom furniture, doing service in many different ways. There are a few scenes that could be tightened up, and the pace takes a while to pick up. However that may well be a good thing – it gives you time to get your eye in, as it were. But overall this is not about sleek production values, it’s about good old-fashioned fun.

Felicity Lott, one could be forgiven for thinking, has perhaps reached the age when she might not want to make a fool of herself. (She is a Dame, after all…) Wrong: not only does she still look and sound gorgeous, she is a consummate actress in this type of role, and from her overture appearance brushing her teeth to her obvious appreciation of Paris’ charms, she steals the show (well, apart from the sheep).

She has a rival for that honour in Toby Spence as Paris, however – already noted for his secure and wonderfully rounded tenor (including in the premire of Thomas Ads’ The Tempest) but now adding superb comic acting to his achievements (not to mention the pecs). Surely he has to be one of the finest singers of the new generation: definitely one to treasure.

Steven Page returns to the Coliseum as a memorable Calchas, Zeus’s auger, a role previously played by that wonderful old stager Eric Shilling, who sadly died this year (and to whom the April 3 performance was dedicated). There’s another welcome return for Bonaventura Bottone as the hapless Menelaus, and company stalwart and resident chameleon John Graham Hall is characteristically unrecognisable as Ajax I.

ENO Young Singer Anne Marie Gibbons makes her mark as Bacchis, Helen’s maid, and Amy Freston – a classically trained dancer as well as a singer – is a lithe and decorative woman of dubious virtue (though her companion Claire Wild, without the benefit of dance training, is pretty hot too).

This is not great opera. It was never meant to be. There are moments of great lyrical beauty, some sweeping, romantic tunes. But mostly it’s parody – listen for the Rossini and Meyerbeer pastiches – and farce, with the great benefit of excellent diction for the script, a must to get the benefit of the jokes.

The orchestra is given a suitably frothy French flavour by conductor Emmanuel Joel, and the chorus is, as usual, splendid in the many and varied roles required – from classically-clad worshippers of the ancient Gods to contemporary tourists getting a bit too frisky in the sun.

A special mention must be made of the ten dancers, who supply some of the most sublime comic moments. Including the sheep. But I wouldn’t want to spoil it for you: this is a show that can’t be adequately described, and has to be seen. Book now for the most fun you can have in London with your clothes on.