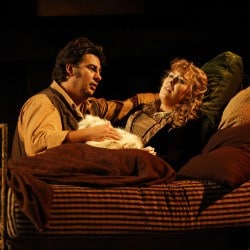 John Copley’s production of Puccini’s La bohème is one of the crown jewels in the Royal Opera’s repertoire, and it’s not hard to see why. In Julia Trevelyan Oman’s eye-poppingly lavish designs, the production focuses on the opera’s leading themes of love, attraction and loss amongst impoverished students, without bowing to modern trends or vacuous fashions.

The current revival is its twenty-first appearance, but contrary to what one or two of the opening night’s critics suggested, it remains a deeply emotional experience that engages the heart from first to last.

And even if the musical aspects weren’t absolutely spot-on perfect in this fifth performance (4 November) of the run, almost all the principals gave of their best throughout, whilst the conducting was a surprising golden thread that bound the whole together.

Both technically and musically, La bohème is a masterpiece that allowed Puccini to express himself to the full. The opportunity for vocal display exists in the form of several of the most popular arias of all time, but this performance worked especially well for me because the narrative and ensemble elements were strong. Copley has returned to direct the revival, and you can tell: Musetta’s pantomime with a snooker cue and the chorus’ acting in Act 2, for instance, were much more vivid, focused and amusing than the last time I saw the production.

Rather than a showcase for a lead tenor and soprano, the opera emerged as a poignant and gentle tale of a group of friends, but even in this interpretation, Young Artist Katie van Kooten’s acting as Mimi in the first two acts was a little bland. However, a complete transformation took place in the final two acts, in which she portrayed the dying heroine with lucid dignity. Much was made of her vocal flaws in the first night reviews; it’s true that she doesn’t project well some of the time, overdoes the vibrato and has a tendency to sing a little flat under strain. But the death scene was truly tragic and, though you’d never know it from earlier reports, she brought the house down with her subtle and tragic performance. If the opera isn’t about the untimely destruction of a beautiful human being, it’s worthless; here, this element is to the fore.

Van Kooten was well supported in the early scenes particularly by the towering performance of Marcelo Álvarez as Rodolfo. Even he has his vocal flaws, actually, but with such a beautiful sound, great projection and utter commitment to his task, Alvarez won the day. An especial highlight was inevitably Che gelida manina in Act I, his ardent tone combined with breathtaking phrasing. His Manrico in Il trovatore in January is something to look forward to.

The most Italianate singer, however, was Nuccia Focile as Musetta (though not surprisingly so, as she’s the only Italian in the cast). The only problem was that her role isn’t long enough for her talents, and in many ways, it was hard not to wish that she was singing as Mimi. In spite of a touch of strain on the high notes of her opening aria, her voice was naturally beautiful, her singing well projected. I loved her flirtatious characterisation of the second act, but the most memorable moment of the entire evening for me was when she turned round in silent anguish on noticing Mimi’s death. This talented singer-actress deserves more attention.

The remaining roles were all committed, if not particularly distinguished vocally. I preferred former Young Artist Jared Holt’s velvet tone as Schaunard to Alexander Vinogradov’s Russian delivery of Colline’s lovely aria. Veteran tenor Robert Tear continues to flourish, adding the role of Alcindoro to his many winning interpretations for the company; and Jeremy White was a typically lively Benoit.

Yet the hero of the evening was perhaps Philippe Jordan, because of his sensitive conducting of the ROH Orchestra. Recently bereaved due to the death of his father, Jordan gave by far the most heartfelt performance I have heard from him, phrasing, accompanying, and supporting the singers with unexpected style. Thanks to his underlying sense of the bohemian atmosphere radiating from the pit, this was a touching revival of a true classic.