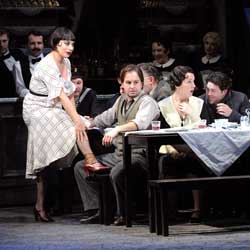 If one were to sit on a street corner and watch the world go by, there would be a chance of seeing the same story unfold. Perhaps it is this fact that makes Illica and Giacosa’s reworking of Henry Murger’s stories so believable. Puccini’s rich and glittering score is taken to a new dimension through the threadbare 1930 setting of Jonathan Miller’s production of La bohème, now in its first revival at English National Opera. Whilst the original libretto is set in the affluent nineteenth century Paris, Miller propels it forward into a penniless, hardened, miserable world.

That’s not to say that the production isn’t beautiful, however. Designer Isabella Bywater’s set is visually stunning and cleverly reversible; a finely manipulated scene change between Acts I and II from the ramshackle flat to the busy market square and restaurant was perfectly timed to coincide with the entrance of the chorus, resulting in the performance energy suddenly being ramped up several notches. The winter scenes in Act III, complete with snow falling on stage, were particularly beautiful, raising gasps from the stalls when the curtain rose after the interval. However, the destitute setting serves to make Mimi’s plight all the more pitiful and convincing, and the stark contrast between the depleted set and Puccini’s rich flamboyant scoring in Rodolfo’s arias seems to prove that love, whatever its setting, deserves celebration.

Amanda Holden’s buoyant and witty translation brings its own energy to the production and works especially well in the scenes with the four Bohemians in their flat. These scenes were executed with real panache, the performers catapulting banter between each other with excellent comic direction. Gwyn Hughes Jones as Rodolfo produced a delightfully free and easy sound, with some real depth around the middle range, and sparkling top Cs in abundance. Roland Wood’s rich and deep baritone gave real dramatic weight to his confident and convincing performance as Marcello. His scenes with Musetta were particularly electrifying and there was some real spark and synergy between the two performers. George von Bergen as Schaunard, whilst occasionally underpowered at the bottom of his range, gave a musical and compelling performance. Together with Pauls Putnins, who made a composed Colline, the Bohemians produced an especially beautiful well-blended sound in their quartet singing.

Elizabeth Llewellyn’s warm buttery soprano lent itself admirably to the role of Mimi and she handled the balance between pathos and conviction in her performance perfectly. Her exchange of arias with Hughes Jones in Act I was particularly moving, as was her final scene, where Rodolfos vain attempts to warm Mimi’s hands draw evocative memories of the first scene in a powerfully forlorn wave of emotion.

One of the most compelling and best sung performances came from the young Irish soprano Mairead Buicke in her role debut as Musetta. Her perfectly focused, confident, rich and sparkling tone cut right through Puccini’s thick orchestral writing (indeed, hers was the only voice that could always be heard above ENOs enormous orchestra) and she commanded the stage as soon as she began to develop her first scene through a brilliantly dramatic tantrum. Initially every inch the diva, and gradually mellowing to a kind and gentle soul, Musetta is a terrific role, and Buicke really did it justice.

Some excellent casting in the smaller roles also became apparent throughout the evening. Simon Butteriss made a hilarious Benoit, Philip Daggett an energetic Parpignol, Richard Angas a suitably frustrated Alcindoro, and Christopher Ross made his vocal mark with a substantial and resonant sound in his tiny role as the Policeman. The vocally excellent chorus bubbled with energy throughout their scenes, with some of the best performances coming from the children in their vivacious pursuit of the toy-seller.

Some of the emotion may be lost in translation, but excellent diction from the entire cast reduced the need to glance at the surtitles and allowed the audience to focus on the action, allowing for a more intimate feel to the production. Visually stunning, dramatically enthralling and with some superb vocal elements, this production is one that shouldn’t be missed.