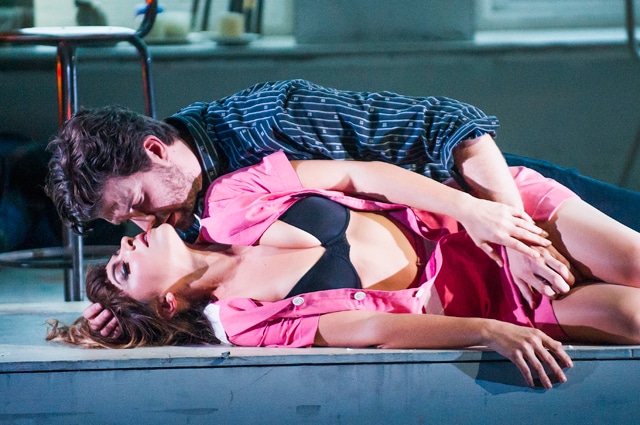 This is by far the most unromantic production of La bohème that I have ever seen. That statement is not necessarily intended as a slur against Benedict Andrews’ new offering for English National Opera, a co-production with Dutch National Opera where it appeared last December, but it is not exactly a compliment either.

There is always a tension in La bohème between Puccini’s ethereal score and the story it tells of imperfect and fragile human lives. It is the purpose of any production to marry these two elements by revealing how perfection rises above, and indeed out of, poverty and destitution. There is more than one way to do this, however, and for this reason I have no problem with Andrews making the whole atmosphere feel rougher and tougher than usual.

The setting is broadly the modern day although, quite deliberately, no exact date can be ascribed to it. Mimì’s dress feels sixties but a child sports a Teenage Mutant Ninja Turtle mask which could make it no earlier than the late eighties, and then the mention of Euros (the production employs Amanda Holden’s translation) would suggest we were after 2002. In their flat, however, which feels like a Spartan artist’s studio with mattresses in spaces above the main room, Rodolfo never uses anything more advanced than a typewriter.

There is no doubt that everything is made to feel just a little edgier than usual. When the men burn Rodolfo’s manuscript, their witty utterances, which normally show they are all in on the same joke, feel slightly more cutting and confrontational. Similarly, Musetta’s routine with the shoe sees her positively kicking Alcindoro across the stage, while the men’s dancing exploits in Act IV culminate in a paint throwing riot. 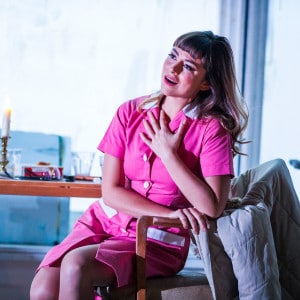 Much as it is permissible to play up the earthly as opposed to spiritual aspects of the opera, however, there comes a point when one side is pushed so far that it undermines what the piece is all about. In its new setting, I have little problem in Rodolfo and Mimì ending ‘O soave fanciulla’ rolling about the floor together. In the modern day this might not necessarily be deemed as going too far on a first encounter, even if it sees them remain onstage when Puccini was adamant that the pair should exit so that the duet’s final notes drifted through to the auditorium. The difficultly arises when Rodolfo sings ‘Che gelida manina’ while injecting himself and then Mimì with drugs. Much as such enhancements may explain why they fall for each other so quickly, it is hard to accept a love that is induced by drugs as being pure in any way. As such, the idea of a true love rising out of the most impoverished of circumstances is totally destroyed.

The direction is rather erratic. The Café Momus scene is certainly lively, but the stage feels extremely cluttered. Though there should be a sense of wider activity for the majority of time, this should never detract from the main protagonists and there is one section in which the children block Mimì and the quartet of men as they sing. On the other hand, it is good to see everyone stop what they are doing and watch Musetta during ‘Quando me’n vo’ as it shows how she can command a room. In fact, when Mimì contributes to the aria, though she is not directly addressing Musetta, it does feel as if we are witnessing the confrontation of two very different philosophies. Some of the updates, however, feel a little jarring. Mimì’s bonnet becomes a pink wig, which is fun for Act II, but in Act III it feels a very unromantic object for Rodolfo to retain as a memory of her, and by the time it appears again in Act IV some audience members may want to be tearing their hair out!

Almost all of the characters come across as too strong and hence soulless, but this is really a consequence of the direction and there are certainly some notable performances. As Mimì, Corinne Winters has a splendid voice whose assertiveness is offset by great smoothness and evenness of tone. Perhaps because she is portraying a Mimì for the modern day, she comes across as too strong and confident, which makes it difficult to believe in her as a weak, waif-like creature, although her frailty certainly feels real enough in Act IV. Zach Borichevsky has a pleasing voice but it is not quite full enough for Rodolfo so his sound only feels expansive within narrow limits. His voice ‘misfiring‘ at the climax to ‘Che gelida manina’ may have been attributable to first night nerves, but there was little evidence elsewhere to suggest that it will rise to another level during the run.

With his strong baritone, Duncan Rock is good value as Marcello while, as Colline, Nicholas Masters gives a pleasing performance of ‘Vecchia zimarra’, his coat cradled in the same way as Mary supports Jesus in a Pietà. The standout performance from the quartet of men, however, comes from Ashley Riches as Schaunard. He has an immensely rich and powerful baritone, and while he is presented as the cool, popular ‘bad boy’ of the group, perhaps by the same token he comes across as a less resilient character than Colline in the face of tragedy at the end.

As Musetta, Rhian Lois initially comes across as just a little too desperate to win Marcello back when surely the character always knows at the back of her mind that she will succeed in her mission. She proceeds, however, to deliver a stirring performance of ‘Quando me’n vo’ and in Act IV portrays the sassy yet self-sacrificing figure very well. Simon Butteriss is an excellent Benoît, successfully playing the part as a character role with exaggerated accents, while still revealing the excellent voice that lies beneath. His Alcindoro is equally strong, although the direction of Act II does not allow him to come to the fore as much as would be ideal. In the pit, Xian Zhang’s conducting is not particularly insightful and some of the details and subtleties in the music are lost, but perhaps by the same token she does capture something of the sweeping nature of Puccini’s enigmatic score.

Martin Fitzpatrick conducts the performances on 12 and 26 November.