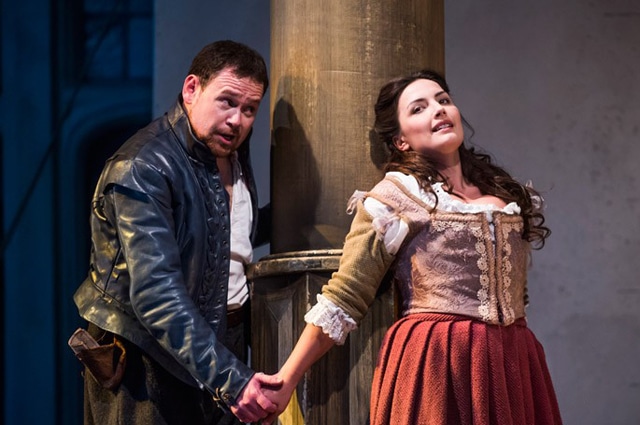 The three most recent productions of La bohème to be seen in London’s major opera houses have between them covered the main ways in which the piece can be presented. It can, like John Copley’s production for the Royal Opera House (1974-2015), be set in the original time of the 1830s. It can be set in a later period, like Jonathan Miller’s English National Opera production (2009-2014) which placed the action in 1930s depression-soaked Paris, or it can be set in the modern day as Benedict Andrews’ new production for ENO (broadly) was.

If, however, with such a frequently performed opera even bringing the drama forward in time feels clichéd, it stands to reason that there is only way to go: backwards. How about Elizabethan England? And with this being the four hundredth anniversary of the death of the Bard, how about performing it as a Shakespearean drama at the Globe Theatre? If the idea initially sounds a little mad, Stephen Barlow’s new production for Opera Holland Park actually proves very successful and it only takes a little analysis to work out why.

Poverty was as rife in sixteenth century England as nineteenth century France, and since La bohème is about how a perfect love can rise above, and indeed out of, the most impoverished of circumstances, a setting that enables that idea to be rendered is far more important than the specific time and place chosen. In its length and proportions La bohème is very cinematographic (it has enjoyed film versions before now) but so too was Shakespearean theatre. With the audience being inches from the action, players would have needed to have revealed the same detail in their expressions and gestures as if a camera had been on them.

Rodolfo and Marcello’s flat is presented as if it were the Globe Theatre, complete with columns and ceiling that depicts the signs of the Zodiac. Marcello’s painting of the Red Sea becomes the theatrical backdrop to the scene, and props, including stepladder and tressle table, are laid out exactly as we might see them on the Globe’s stage. The four men spend much of Act I exploiting the different levels created by the ‘furniture’, and adopting dynamic gestures that make clear they are putting on a performance. Benoît arrives by crawling under the backdrop, which is later changed by having fully costumed stagehands tugging on pulleys in full sight of everyone.

When Mimì and Rodolfo deliberately blow out their candles there is not just a knowing look on the face of the other. Rather, neither makes any attempt to hide extinguishing their flame, and the other laughs as they watch them do so. As well as revealing something about the characters and their relationship, this may also represent a director’s joke. The Globe is outdoors, and plays would generally have been performed there in daylight. As a result, it would have been impossible to create darkness, and so a solution would have been required that did not need it in order to make sense viusally. As Puccini prescribed, Mimì and Rodolfo exit before the end of ‘O soave fanciulla’ so that the final notes drift through to the audience, and here another joke is added as a light shines through the backdrop so that we see them kissing in silhouette.

Act II is very well executed, and sustains our attention by employing a different range of devices to Act I to play out the notion of an Elizabethan staging. It begins with the entire chorus, including the children’s chorus, occupying the broad stage and singing out to us before breaking up and rendering an action-packed scene. Characters and vocal lines are delineated well so that this Café Momus exploit is more comprehensible and easier to follow than many. Musetta appears dressed as an Elizabethan Lady, her clothes having presumably been bought by the here aristocratic Alcindoro. Blocks are cleverly positioned so that at times we see Musetta taking Momus by storm on one of them and Rodolfo and Mimì being more reflective on the other. In between Schaunard and Colline comment on the action as if it were a play, with the theatricality of the occasion providing a further reason for why this production’s concept works. A similar point could be made in relation to the men’s commentary as they burn Rodolfo’s play in Act I.

The remaining acts are not quite as successful because the idea runs out of steam a little. It may be amusing to see a stagehand complete with lantern making the snow fall in Act III, but should laughter be our reaction here? In Act IV it hardly matters that quadrilles and fandangos were not known in the sixteenth century because the men turn their dance into a lighthearted duel, complete with swords. However, on Mimì’s death Rodolfo lashes out. ‘To reach for one’s sword’ may reflect a ‘Tudor’ approach to coping with sorrow, and it is clearly his way of expressing his anguish, but the ending might have been more moving if we had seen the characters showing nothing but emptiness and sadness, as opposed to any hint of aggression.

Shaun Dixon is an excellent Rodolfo, with a tenor of power and warmth. One senses that he rushes the climax to ‘Che gelida manina’ because he wants to get through it as soon as possible, but he does not do it badly and overall puts in a strong performance. Anna Patalong reveals a pleasing combination of purity and colour as she renders Mimì’s lines with sensitivity and precision, while Elin Pritchard as Musetta has both the strength and quality of voice to make ‘Quando me’n vo’ an undoubted highlight of the evening.

Marcello, Schaunard and Colline are played well by Andrew Finden, Frederick Long and John Savournin respectively. Savournin, in particular, brings his brilliant bass-baritone to the fore as he begins ‘Vecchia zimarra’ by addressing his coat as he would a friend as it hangs on a column, and then takes it in his arms. The City of London Sinfonia forms the orchestra, and the conducting of Matthew Waldren, who was recently awarded an ENO Charles Mackerras Fellowship, reveals a keen eye for detail and balance while still capturing something of the sweeping nature of Puccini’s enigmatic score.