Covid, schmovid… The Royal Opera is back despite continuing restrictions. 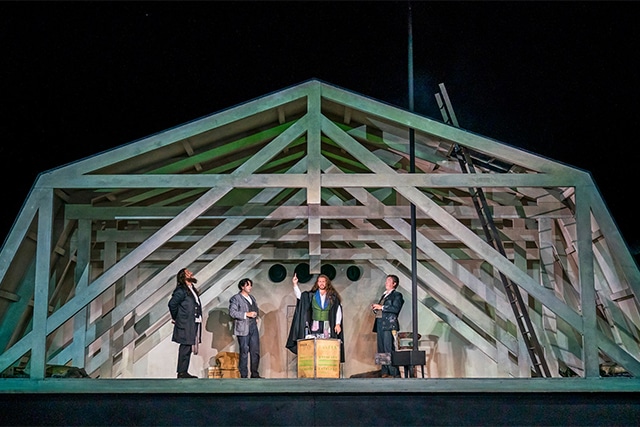 Richard Jones’ temperate staging of La Bohème made a welcome return to the Covent Garden stage this week, with a fresh-faced – and voiced – cast, and a conductor who instinctively knows how to squeeze the last drop of emotion from Puccini’s remarkably inventive score. A distinct improvement on the Copley staging it replaced, which was saddled with clunky sets and suffused with faux-realism, Jones’ version looks set to become a classic – it’s certainly bedded in nicely since it was new a few years ago, although this time revival director Dan Dooner had to make considerable changes, most notably to Act II, to make the staging COVID compliant.

And we’re delighted to report he did a sterling job. Stewart Laing’s movable Parisian shopping arcades, and box set for Cafe Momus, no longer house a full chorus. And while the characters weren’t required to check in to ‘Track and Trace’ before being seated for their Christmas Eve supper, the rule of six was visibly in place. Yet despite these constraints, Momus never felt sparsely populated, as Dooner kept the characters on the move. It was all deftly handled, and quite miraculous that he managed to retain a sense of hustle and bustle, with such pared-down resources. 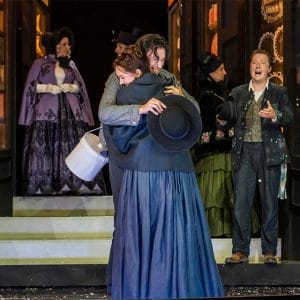 There was no marching band to conclude the act either – drummers and trumpeters spilled over from the pit into the Stalls Circle – so Dooner had to completely restage the final bars, yet accomplished this masterfully. The full chorus (socially-distanced of course) flooded the empty stage, copious amounts of snow fell and Schaunard entertained us, and the crowd, to an extrovert set of dance moves.

Elsewhere, if memory serves us well, Dooner followed Jones’ staging to the letter. And whilst Laing’s Parisian garret may have been home to ‘starrier’ casts in the past, this revival benefitted from having a group of young singers who not only looked the part, but performed as a tightly-knit ensemble. They laid bare their feelings with unflinching honesty – love, joy, pain, loss – in such a way that one couldn’t help but succumb to the emotional pull from the stage.

“It was all deftly handled, and quite miraculous…”

The chemistry between Joshua Guerrero (Rodolfo) and Anna Princeva (Mimi) was palpable from their first encounter. His singing – virile, open-throated – was properly Italianate, yet he thankfully never forced what is an essentially lyric voice. He sculpted the phrases in ‘Che gelida mania’ and ‘O soave fanciulla’ lovingly, and persuasively. Similarly, Princeva soared effortlessly in ‘Mi chiamano Mimi’. There’s a delicious Slavic edge to her voice, which never intrudes on the musical line, yet adds bite for added emphasis. Their almost puppyish love-at-first-sight encounter had a sense of spontaneity you rarely experience in this opera, which made their relationship’s conclusion all the more harrowing.

On this showing, the other three Bohemians would certainly appear to be on the cusp of major international careers. Boris Pinkhasovich (Marcello), Cody Quattlebaum and Gianluca Buratto (Colline) impressed with their virile singing, and magnetic stage presence. Pinkhasovich’s fiery relationship with Danielle de Niese’s larger than life Musetta was brilliantly realised – and they were both in sovereign voice.

As suggested earlier, the company’s former chorus master, Renato Balsadonna, certainly knows how this opera should go. He was sensitive to his singers, and despite having an orchestra of only 47 players, as opposed to the usual 74, he made Mario Parenti’s reduced orchestration sound like the real McCoy. Well, having said that occasionally one missed the warmth the standard-sized strings can bring to Puccini’s lush score, but under the circumstances no one would have left the opera house feeling short-changed.

Congratulations then to The Royal Opera for mounting these COVID-safe performances for an opera-starved audience that quite rightly cheered this one to the rafters.

Further details of this production can be found here.