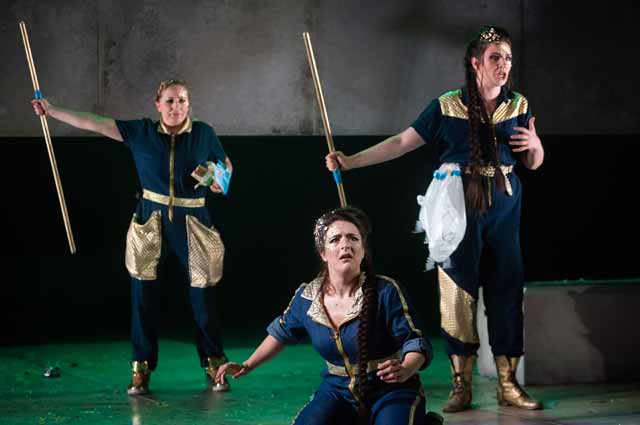 Longborough Festival Opera’s 2019 Young Artist production is a highly dynamic telling of La Calisto. In the process of relating the story so engagingly, a few ideas may be pushed too far, but there is no doubting the strength of the performances in an evening that never drags for a second. True, the piece may have been cut quite heavily, but knowing just how much to feed an audience, and what can be safely omitted, is surely a positive in its own right.

Mathilde Lopez’ production is set in the modern day, with Jean Chan’s set seeing ‘concrete’ blocks and panels grace the stage. In this way, the scorched earth feels like the wreck of a club following a heavy night as Destino (Lizzie Holmes), L’Eternità (Angharad Watkeys) and La Natura (Emma Charles), whose tops proclaim ‘Olympus Cleaning’, try to make sense of the place by clearing away the inflatable flowers strewn everywhere.

The evening is constantly entertaining, as Juno is actually accompanied by her peacocks (two men with masks on their head) who instantly scratch around for the birdseed that she throws. The heads of various types of bear grace the stage, and are frequently donned by characters before Calisto herself is transformed into one. Pane (James Gribble) and Satirino (Gabriel Seawright) are dressed as quite trendy goats while Sylvano (William Stevens) appears as a giant green bush! The comedy highlight of the evening, however, comes when the shepherd Endimione appears clutching or pulling several inflatable sheep. These are filled with (presumably) helium so that they bob and nod as he tows them, and land on their feet when he throws them in the air. The real humour, however, comes from the fact that, amidst all this, Brian McAlea plays it completely straight, with his baritone revealing a beautifully sensitive sound.

When Giove is disguised as Diana the part is actually taken by Sophie Goldrick, who plays the Goddess of Hunting, and she sings the first line down an octave to suggest that Giove has not quite mastered his overall disguise yet. This ties in with the librettist Faustini’s intention to make Giove’s rape of Calisto feel like a consensual lesbian encounter, although given how the evening latterly pans out it is questionable whether this concession to good taste is really needed here at all.

There are several highly notable performances. Chiara Vinci, who played the Young Shepherd here in Tannhäuser in 2016 and Amor in L’incoronazione di Poppea last year, reveals a pleasing soprano and spirited acting in the title role. Sophie Goldrick offers a highly intriguing mezzo-soprano as Diana, while Zita Syme is a very accomplished Giunone who displays an extremely well developed soprano. Felix Kemp reveals an excellent baritone as Giove, Neil Balfour a superb bass-baritone as Mercurio and Emma Charles a sublime soprano as Linfea.

The orchestra, which plays from a raised pit, is provided by The Barefoot Band, and comprises no upper strings but rather recorders, clarinet (and bass clarinet), double bass, harpsichord, accordion, electric guitar and percussion, as it is conducted from the keyboard by Lesley Anne Sammons. In this way, certain parts of the score, such as some recitative between Giove and Mercurio, are rendered in disco-like styles as Mercurio also does some wordless rapping into a microphone. While, however, this is entertaining, and the music is generally robust enough to take these divergences, the ‘joke’ is perhaps taken too far. Over the evening as a whole, quite a few variations are introduced so that at one point the music seems to provide the perfect support for some good old-fashioned crooning, and at others it carries hints of danger more normally associated with tango. As a result, its lurches in style feel too frequent, and thus undermine the ability of the opera to come across as a coherent whole as the original music already contains the necessary levels of variation in order for the piece to work.

In line with its modern day setting, the production plays down the romanticism of Calisto taking her place among the stars, and instead reveals how she has become just another of Giove’s trophies. Thus when she is in the heavens, she looks physically exhausted and emotionally broken, and ends the opera appearing as a bear in a cage. The rape of her and other characters is brought out by them all ending up with bloodied faces. In line with this, the final, normally triumphant, chorus sees everyone looking pained and soulless, with the possible exception of Diana and Endimione, although even here she spends half of the time trying to comfort Linfea. In this way, if the earth started off scorched, it ends up in exactly the same position, despite, or perhaps because of, Giove’s showering of gifts (symbolised by confetti) on it.

However, while the brutality we witness towards the end is hinted at throughout, it takes such a step up from the end of Act II onwards that it still feels a little incongruent with what has gone before. All the same, this is never less than a highly entertaining and extremely accomplished production, which features a considerable amount of up-and-coming talent.

Longborough Festival Opera’s 2020 season includes productions of Die Walküre, The Elixir of Love, The Return of Ulysses and The Cunning Little Vixen. For further details visit the designated website.